'Little Women' by Louisa May Alcott 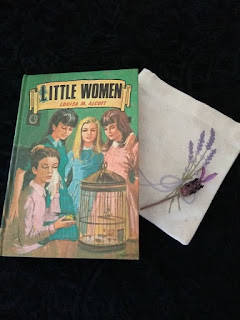 Following the lives of four sisters on a journey out of adolescence, Louisa May Alcott's Little Women explores the difficulties associated with gender roles in a Post-Civil War America.

This review is of the first installment of Little Women. It was eventually pulled into one volume with its follow-on sequel, which was initially called 'Good Wives' but I'll review that one separately, since I own distinct old volumes. And I think you'll agree this review is long enough.

MY THOUGHTS:
This is a beautiful, ever-lasting memorial to the lifestyle the author lived with her sisters well over a century ago, while many men were off serving in the Civil War. I think it's a great book to pull us out of a bad mood. The March sisters all had their cranky moments, but used the attitude tools their parents showed them to move through.

Marmee comes across as the wise, loving mentor they all considered her to be. 'The girls thought the grey cloak and unfashionable bonnet covered the most splendid mother in the world.' What an awesome introduction and tribute. I noticed something interesting this time round, when she spoke to Jo about overcoming her bad temper. I'd always remembered it wrongly, thinking Mrs March had managed to pull off a total personality transformation. But what she actually said was, 'I've been trying to cure it for 40 years, and have only succeeded in controlling it. I am angry nearly every day of my life, Jo, but I have learned not to show it.' Wow, that's different from what I'd thought. Maybe we're being unrealistic whenever we set about trying to change ourselves into someone else. Perhaps our weaknesses are just part of our fabric, and we need to focus on managing them rather than eliminating them altogether.

'Little Women' does get me thinking about the nature or nurture debate. At first sight it seems nature has its way, since the four sisters are so different from one another. Yet it can't be denied that birth order may have a bit of bearing on their family. Beth and Amy were treated a little more leniently and indulgently than Meg and Jo. Those two were referred to often as 'the children' even though there was only four years between all of them. Would Amy have still tried to impress people with her ridiculous, mixed-up words if she'd been born first? Or would Meg have felt the need to deliver quite so many lectures to the others, if she'd been youngest? Interesting to ponder.

I'll be glad to move on to the next book, when Amy's vocabulary blunders have finished. It reached the point where she was coming out with one every time she opened her little mouth, and then like a Pavlovian dog reaction, Jo would always make some snarky, superior correction. I felt like saying, 'Come on dudes, can't you both stop?' When quirkiness moves into predictability, it's not so cute anymore. However, I do remember that on my first reading of Little Women, when I was very young, the comedy was all completely lost on me, since I didn't know the meanings of the real words or Amy's wild guesses either.

It's handy to be familiar with some of the older books the girls refer to all the way through, since they impacted their lives in such a good way. For example, Pilgrim's Progress and Pickwick Papers become the basis for all sorts of games and leisure. It's good to see how the girls used other people's writing to shape their own characters. They didn't even realise they were doing this, since it was all in the name of having fun. So Bunyan and Dickens did for them just what Louisa May Alcott herself does for us. I love this pay-it-forward aspect of a good story.

This time around, I felt my heart leaning more toward Meg than ever before. I remembered her as the know-it-all big sister who seemed to have it all together, but she drops some of the most touching quotes which could come from someone straight out of the twenty-first century. 'I shall have to toil and moil all my days, with only little bits of fun now and then, and get old and ugly and sour because I can't enjoy my life as other girls do.' She also says, 'We go grubbing along, day after day, without a bit of change and very little fun. We might as well be in a treadmill.' My own teenage daughter has said similar things, in different words, and I totally get them.

For a girl who appreciates luxury and leisure as Meg does, her choice of fiance seems sort of counter-intuitive. She knows that agreeing to marry a modest, hard-worker like John Brooke will keep her doing the same things she's always done. If she really wanted the riches and pretty things she admired so much, she might have done better to have chosen the stylish Ned Moffat after all. But common sense and true love win out, and we've got to love her and her choice.

That brings me to Jo's situation, which is my biggest gripe. The first part of the story ends with Meg's engagement and Mr March's return. If I was a fresh reader, I'd be anticipating the budding romance of Jo and Laurie in the follow-up. I'd be assuming Alcott was clearly heading in that direction. That pair had common interests crying out to be noticed. They were both fun-loving with a penchant for generous gestures, a tendency to be impulsive and a love of simple mischief and cheek. They shared a mutual disregard for some of society's more nitpicky maxims and always managed to calm each other down when necessary. Jo was adamant that she'd never be swept off her feet by anyone, yet yearned for 'Teddy' whenever she felt lonely. If I didn't know what was coming, I'd be expecting her to fall heavily for the boy next door. I know many people have felt ripped off over the years, thinking Alcott pulled a mean trick on us all. There's a place for platonic friendships, but these two could have been so great.

The first installment ends this way. 'So grouped, the curtain falls upon Meg, Jo, Beth and Amy. Whether it ever rises again depends upon the reception given to the first act of the domestic drama called Little Women.' Wow, what an outright pitch within the text itself! It definitely worked for Louisa May Alcott, but it would be interesting to see writers try a line like that now.

Even though the writing style may be a bit dated by modern standards, I still want to give it full marks for what it is, because Alcott wrote a fantastic girls' book for a Civil War chick, when there probably weren't all that many others around. I'll get on with 'Good Wives' which takes place three years later.

Update: I've now reviewed the second installment of the story, Good Wives.
And here is my review of March, the Pulitzer winning novel written by Geraldine Brooks about their father, and how he fared in the war.