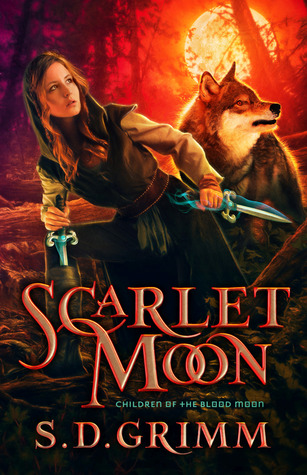 The hunted Feravolk are counting on Jayden, a seventeen-year-old, dagger-wielding, storm-detecting orphan, to save their race. Maybe they should have thought of that before they killed her family.The land of Soleden is dying because the sorceress queen hunts and kills the people who cared for all nature, the Feravolk. Through their special bond with animals, the Feravolk have become more than men. Faster, stronger, masters of camouflage and stealth. Only a Deliverer born the night of the Blood Moon can save them from extinction.According to prophecy, Jayden is a Deliverer, but it’s not a destiny she wants. She has no sympathy for either side. The Feravolk killed her family, so they can die for all she cares. And fighting the queen with nothing but daggers and her special abilities—storm predicting—is a suicide mission. Destiny can pick someone else.Except hiding from destiny proves difficult; Deliverers attract powerful Protectors. Jayden’s is one of the Feravolk, so he can’t be trusted. But he makes her feel safe. Makes her want to save his race. If she chooses to keep hiding, he’ll remain one of the hunted, but he’ll protect her even if it means his death if she faces the queen. Making the right choice has never been so excruciating, especially since the prophecy says nothing about the Deliverer’s success, or survival.

MY THOUGHTS:
Strong fantasy isn't usually my first choice of genre, but I was requested to read this and it's quite a fascinating story once we grasp it.

It's not the easiest plot to latch onto at the beginning. The story is told in third person with five alternating points of view, so initially we are shuttled from one perspective to another without knowing what's going on. Since the characters themselves aren't even clear about the happenings elsewhere in their realm, it stands to reason that the reader won't be either, until enough time has passed that we begin picking up the threads of the fast moving story, with its deception, violence, loyalty and adventure.

There are several main characters but foremost is Jayden. The story starts when her beloved parents and brothers are slaughtered trying to protect her from aggressive soldiers who attempt to abduct her. Jayden was a child born on the night of the Blood Moon. These young people have distinct, identifying birthmarks and unique skills that set them apart from others. Evidence seems to indicate that the Feravolk people are behind the attacks, giving her good reason to hate them.

Jayden's fiance, Ryan, is seriously injured with a poisonous arrow as he helps her escape, setting her off on a quest to save his life. It's vital to get hold of a specific rare herb which only grows in the Valley of Hidden Ones, where she and her friends must contend with dangerous animals, including unicorns. They are also forced into the proximity of the corrupt queen's royal army, who really are responsible for the attacks on Blood Moon children.

Jayden's companions include her protector, Logan, who happens to belong to the Feravolk, and his wolf companion Westwind. For those who enjoy lovers' triangles, there are emotional moments when Ryan's brother Ethan joins them, especially since he is a dashing and heroic main character himself. Jayden has always known she's never felt passionately in love with his brother, so the stage is set for tension.

The monarch, Idla, deserves to take her place in the ranks of literary evil queens. She has her own selfish reasons for wanting to get hold of all the Blood Moon children, and sneaky ways of setting about it. Other members of her court include Franco, her despicable son, Oswell, her chief advisor, and assassins Thea and Kara, the 'Destruction Sisters'. Logan's wife Rebekah is also forced into the queen's service, along with their son Connor, for reasons the reader has to discover.

There is a dark fairy tale feeling about Soleden, the setting, and the characters are endearing with lively dialogue and heroic perseverance. This book is almost 400 pages long and there are sequels coming, so readers who enjoy long, epic fantasy adventures should be well satisfied. However, others may find it a challenge, trying to make sense of a world we don't understand, and being forced into the head spaces of people who do.

Thanks to Net Galley and Enclave Publishing for my review copy.