'Of Stillness and Storm' by Michele Phoenix 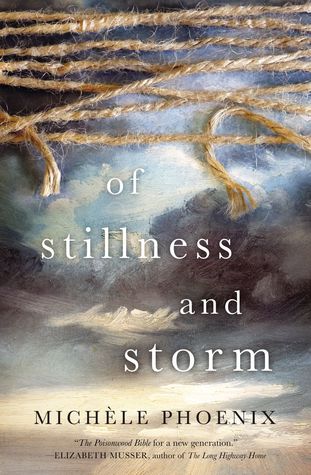 “I felt torn between two worlds. Each with its own mystery. One more captivating than the other, but the other more real and breathing.”
It took Lauren and her husband ten years to achieve their dream—reaching primitive tribes in remote regions of Nepal. But while Sam treks into the Himalayas for weeks at a time, finding passion and purpose in his work among the needy, Lauren and Ryan stay behind, their daily reality more taxing than inspiring. For them, what started as a calling begins to feel like the family’s undoing. At the peak of her isolation and disillusion, a friend from Lauren’s past enters her life again. But as her communication with Aidan intensifies, so does the tension of coping with the present while reengaging with the past. It’s thirteen-year-old Ryan who most keenly bears the brunt of her distraction.Intimate and bold, Of Stillness and Storm weaves profound dilemmas into a tale of troubled love and honorable intentions gone awry.

MY THOUGHTS:
The heroine of this story is Lauren, who unwillingly lives a spartan lifestyle in Kathmandu, Nepal, teaching English as a second language. Her 13-year-old son Ryan also hates the lifestyle to the point of sinking into such deep depression she can't reach him. They are there because of Sam, their husband and dad, whose missionary zeal is the driving force.

It's all about warning us to take care before getting attached to zealots whose passion far exceeds our own. Sam is like a modern St John Rivers from Jane Eyre. Deprivation is a badge of honour to him, but a pain in the neck to his family. He keeps his conscience clear because he doesn't expect anything from his wife and son that he's not prepared to give himself, but never stops to consider that few people are designed with his tireless ardour. He even worded his marriage proposal like an exam, telling her he didn't want to be the sort of guy who'd lose track of his goals because of his family. Sadly, Lauren didn't recognise the warning and duck out like Jane Eyre, but got attached to him anyway.

Her attitudes and motivations are easy to understand. She grapples with guilt because she knows that compared to him, she's just going through the motions. She finds herself eagerly catching up with her old friend Aidan on Facebook. He offers something she's not getting from Sam, being a free-spirited artist who even disregards the conventions of the English language.

The person I felt for most was Ryan, since kids don't get to choose their parents, then get dragged from pillar to post. The story raises so many questions. Should those with such strong standards for the way they approach mission work even have families, since it's clear they'll be pushed into second place and forced into molds which don't fit them? Maybe people like Sam should follow the example of St Paul, who probably didn't for that very reason. Can we ever force ourselves to take on the burdens of someone else's heart, no matter how much we love them, and should we even be expected to? Can decisions which we make with the shortsighted, rose coloured glasses of youth cast shadows over us for the rest of our lives? In my past, I've come across a few deep and meaningful Sams who I greatly admired, but as I read this novel, I felt grateful that I married my husband instead :)

It wasn't the style of book I usually go for. I'm not a fan of gut-wrenching heartache (of which this book has its share), but sometimes when you're making requests for ARCs based on brief blurbs, you have to accept the risk. I'm a highly sensitive person and also a bit on an empath, which makes it easy to take others' grief on myself. When an author's writing makes me fond of characters, it sticks with me for ages when horrible things happen to them. That's why I'm not giving it full marks, but I know this is a personal thing. Michele Phoenix's writing certainly deserves five stars, and she does warn us herself in the notes at the back of the book that this is a cautionary tale.

Thanks to Thomas Nelson and NetGalley for my review copy