'The Bishop's Girl' by Rebecca Burns 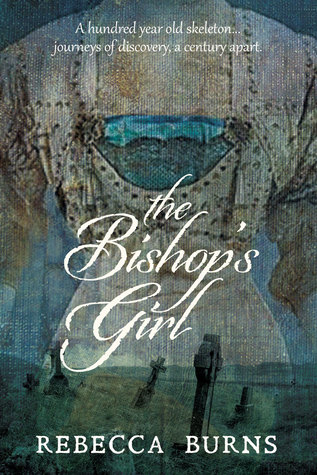 The body had no name. It was not supposed to be there...

Jess is a researcher on a quest to give the one-hundred-year-old skeleton, discovered in the exhumed grave of a prominent bishop, an identity. But she's not sure of her own - her career is stalling, her marriage is failing. She doesn't want to spend hours in the archives, rifling through dusty papers in an endless search for a name. And when a young man named Hayden makes clear his interest in her, Jess has to decide what is most important to her.

Wow, this book takes us on a real journey.

A group of supporters were exhuming the body of Bishop Anthony Shacklock, who died in France in 1917. They intended to return him home to England. To their shock, the crudely wrapped remains of a young woman had been buried with him. The discovery of her identity eluded researchers for years, but Professor Waller refused to give up.

He gives archivist Jess Morris the job of following leads on his behalf. She resents the time it takes from her own projects, especially since the professor never gives his staff any credit. Her marriage to Alec is floundering, and she's started a clandestine affair with Hayden, her best friend's son. Yet Jess finds herself reluctantly drawn in to the mystery, especially concerning Allegra, a woman who might have had links to Shacklock and the mystery girl.

It's not a mystery in the true sense of the word. There weren't really red herrings to follow in the story, but rather a matter of major revelations showing up at the right time. Rebecca Burns' brilliant way of writing the dual timelines puts us right in the picture, whether it was turn-of-the-century Greece or the war torn France of 1916. Toward the end it started shifting quickly between the modern story and the older ones, and I was hooked. The final revelation has stuck in my mind. It's not a particularly happy story for some, although it works out not too badly for others.

What I found most intriguing was watching it dawn on Jess that she could apply something from the old experiences of others to her own situation. She grows to regret the churlish way everyone referred to the unknown girl as 'the cuckoo' and sees her as a person whose identity had been suppressed and overshadowed. So while Waller was anxious to break through for his own selfish purposes, Jess grows to care more for the nameless girl herself.

The main men had mixtures of strengths and weaknesses. I was all set not to like them at first. There's Hayden, pursuing his relationship with Jess even though she stood to lose such a lot more than him, with husband and children. And Shacklock, making the same mistake twice within the same family circle! You'll see what I mean when you get there. Inexcusable really, but I couldn't help finding them both likeable.

Ironically, Hayden and Shacklock gave similar lines of sound advice, so many years apart. Shacklock tells Allegra, 'If you decide against it (the theatre) make that your decision. Be true to what you want to do. Don't be restrained by the perceptions of other people.' And over one hundred years later, Hayden tells Jess, 'Make a decision about where you want to be and don't torture yourself with it. It's that simple.'

Who were my favourite characters? The first was Billy Butterfield, Jess' modest research colleague. What a champion. And Allegra, whose two most beloved people did such disappointing things to her. Her sweetness and futile quest stayed with me the most. Maybe it's because I have a beautiful seventeen year old daughter of my own. So close to home, my heart breaks.

So overall, any book which sticks with me like this deserves a high ranking.

Thanks to the author and Odyssey Books for my review copy.