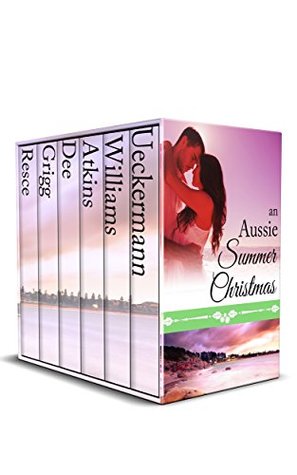 MY THOUGHTS:
I was offered the opportunity to read and review this set of six novellas, which have been released in time for Christmas. I'll say at the outset that several of these authors are friends of mine, and people I've known for some time. I've even collaborated on a novel with two of them. They have all had loads of collective experience in the romance genre, and their work has been enjoyed by many. It sounded like a great idea to put together this holiday collection, so I was happy to have a read.

It's great to see the hot Christmases we enjoy down in this part of the world get highlighted as they deserve to be.  They're the only type of Christmas I've ever known. They might not be the traditional snowy type, but are festive in their own unique way, which is shown in these novellas. It might feel a bit weird for international readers to snuggle by their fires reading about tropical barbecues, yacht races, swimming and sunbaking, but it should be fun. I like to think each of these stories might be taking place simultaneously on the very same Christmas. Given the set's name, 'An Aussie Summer Christmas' perhaps that's the case. Here's a quick run-down of each of the stories. Keep in mind that the threads which draw them together are Christmas and romance.

Melbourne Memories by Marion Ueckermann
Justin Taylor, an ex-rock-star and former drug addict is on the run because he owes a huge sum of money to his old drug dealer, Danny. Ella Anderson is the owner of Barista Art Cafe, the most popular coffee shop in Melbourne. She's attracted to the mysterious stranger with his guitar and wants him to open up to her, while he fears that she'll run away if he reveals too much. The descriptions of the cafe draw me in. I'd love to order a hot chocolate and experience the signature foam art from this story.

Santa Next Door by Lacy Williams
Will Harris is a computer coder who likes his peace and quiet. He resents the happy, noisy neighbour in the unit above his. Bridie Taylor senses that he dislikes her, but doesn't hold it against him. When a sudden emergency throws them together, he can't help warming to her despite himself. It's a lovely story about not judging people on first impressions. She's a very memorable character, as a person who has been through a major health crisis and is now simply enjoying life.

Seaside Christmas by Narelle Atkins
Gus Donovan is a pastor's kid and former party boy who now works for a senator. Chelsea Somers is the girl who was once attracted to him, but felt he friendzoned her after just one date. Now that they've renewed their friendship, will their evident niggling differences be a major issue? For a start, she hates politics, which is his whole life. This story also delves into the complications family situations can throw into a relationship, especially if they've known each other for some time and it hasn't been altogether pleasant.

A Christmas Resolution by Rose Dee
This story either returns or introduces readers to Rose Dee's trademark tropical location, depending on whether you're familiar with her writing. Breeah grapples with feelings for Troy, although she was widely known to have dated his brother Hayden in the past. There is an incident from their history which creates awkwardness between them. And meanwhile, Breeah has discovered evidence of a mysterious romance from her grandmother's past which seems to present parallels to her own situation, if only she can discover the mystery man.

All is Bright by Andrea Grigg
Amy is a self-professed good girl and physiotherapist who knows her life appears to be picture perfect to the outside world. What she never reveals is the turmoil which bubbles beneath, convincing her that her life is second rate and also that she's a far worse person than anyone would believe. Not only has she concealed feelings of irritation and resentment toward her sick sister Tess, who is now deceased, but she's always been deeply in love with Tess' husband, Josh. He meanwhile, receives a letter from his wife beyond the grave, through their solicitor, making a shock suggestion.

Falling for Maddie Grace by Meredith Resce
I hope this story gives international readers a curiosity and appreciation for our great national sport, AFL football. Maddie Grace is one of the first female field umpires, proud to be succeeding in a formerly male dominated arena. During a match, she has a nasty collision with one of the players, Zac Beecham, which knocks them both out. In the aftermath, they discover the media has made all sorts of wild conjectures about their platonic relationship which might jeopardise their careers if taken to the extreme. This must surely be the first AFL romance ever written, and I found myself chuckling all the way through.

I'd recommend this set to ladies who'd like a good beach read over the summer holidays.
Posted by Paula Vince at 8:22 AM