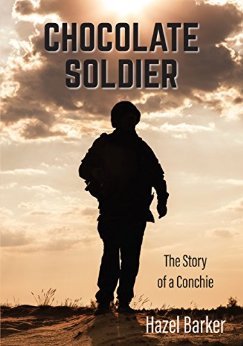 When World War II breaks out and men over eighteen are conscripted, Clarence Dover, a conscientious objector, refuses to go rather that compromise his principles. Instead, he joins the Friend's Ambulance Unit. From the London Blitz to the far reaches of Asia the war tests Clarence in the crucible of suffering. In the end, will he be able to hold his head up as proudly as the rest and say, to save lives, I risked my own?

One man will stand as God's soldier, not the war's soldier.

MY THOUGHTS:
We're straight away introduced to Clarence Dover, a young man convinced he'd rather serve his country in some other capacity than killing his fellow men. A tribunal grants his request to be a conscientious objector (conchie) provided he does something useful to help the war effort. So Clarence joins the Friends Ambulance Unit (FAU) and the story tracks down what happens to him, starting in London and taking him through India on his way to China.

The attitude of the general public toward conchies was an eye-opener. The brave young men were doing a lot of good and making enormous sacrifices, yet had to put up with taunts of cowardice, which proved to be completely untrue. Even their families were implicated in the shame, and Clarence went through the heartache of being frowned upon by his sister and sweetheart, at least for a little while. No doubt that was why his friendships with fellow conchies became so strong.

I didn't come across the author's note and epilogue until the very end, but finding out that these characters were real people didn't surprise me at all by that stage. I had a strong feeling that Clarence and his friends and family would turn out not to be fictional. The story isn't written as a traditional plot structure, and the strong and original, often random anecdotes, give the impression of true tales. Sure enough, it turns out Clarence was the author's uncle-in-law. Knowing that adds to the interest level.

What different times these war years were for young people to be alive. The parts which took place in London kept putting me in mind of those 'Keep Calm and Carry On' posters, because it was just that time and place. Then the events in India and China are described in all their exotic detail. Although people led such interesting lives, they were times when young folk wouldn't have spoken of following their dreams, as they do nowadays. Circumstances dictated that you simply did what you could. Your own desires had to be put aside for the good of your country.

Some of the events are horrific, and what keeps us turning pages is wondering whether or not Clarence will change his attitude. Will circumstances beat down the man? From the start, he's presented as very highly-principled and sensitive. Attitudes which might have come across seeming a bit sanctimonious from his mates somehow don't from him. You wonder whether the anger at seeing what the enemy is doing will make him re-consider his conchie stance after all. There are times he's tempted to change his views, such as longing to defend innocent victims, so it's interesting to see if he comes out the same way he went in.

Some of the changes in Clarence are subtle. Maybe people who are quick to take offence at things they see on social media could learn from his example. Several times he finds the speech and attitudes of those around him offensive, but decides to purse his lips, knowing it's not wise on his part to expect everyone to share his points of view.

Altogether, this is an interesting read about an entirely different time period. Not least interesting is the title. Just for a teaser, it has something to do with Bourneville village and the Cadbury factory being located near where they first start out, along with Clarence's boyish weakness for chocolate which never changes. It's a good, accurate story which must have taken lots of research.