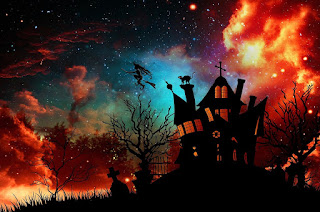 I was thinking of writing a post about gracious old literary homes in general, but when I started planning it, I realised one sad thing many have in common. Having their beloved dwellings burn down, get bombed or crumble into disrepair seems to be something fictional characters just have to put up with every so often. This reasons for this are probably many.

*  Some authors enjoy psychological symbolism, and decide that the four walls a character calls home will represent his inner state. Therefore if they're undergoing a lot of mental turmoil or destructive behaviour, well, you know what that means.
* Leaving characters destitute with nothing more than the clothes on their backs can really increase the tension, and possibly raise the stakes of the plot higher than ever.
* Maybe it's fun for authors to get pyrotechnic with fictional places, since they'd never do it in reality. It could be a good form of stress relief. You know how they say clearing out a room of your house can be cathartic? Well, how about clearing a whole mansion or two from whatever writing project you're working on?
* Ruins are sometimes regarded as romantic, so maybe it helps evoke the right atmosphere when you add one or two into your stories. A blazing fire is certainly a dramatic event which may stick in a reader's memory (although after what I'm sharing here, it could also be argued that they blend together a bit if you overdo it). 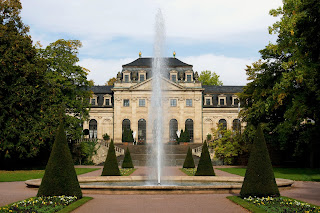 Here's some of the doomed houses that sprang to my mind. Keep in mind, the very nature of this list makes it plot-spoilerish. Skip any if you really don't want to know.

Jane Eyre returns to the mansion she once called home to check that all is well with her beloved master, Edward Fairfax Rochester. She turns a corner to find that Thornfield has been ravaged by flames and lies in ruins. She learns later that Bertha, Rochester's deranged wife, finally managed to set the whole place on fire, which seemed to be a goal of hers all along. This time, she killed herself in the process. Here's my review.

It's near the end of the story. Maxim de Winter and his child wife are returning home joyfully because he's just been cleared of the murder of his first wife Rebecca (even though he really did it). They see a bright haze in the distance ahead of them, which looks like a glow of fireworks joining their celebration. They realise to their horror it's their own home going up in flames! Mrs Danvers, the creepy old housekeeper who had adored Rebecca, finally snapped and set a match to the place. I understand her in a way, considering the shenanigans she'd witnessed. Here's my review.

Young Jacob Portman is attempting to track down the old Welsh orphanage where his grandfather once lived. He discovers that it had been bombed by the Germans during the war, and all the inmates perished. But little does Jacob know that's not the end of the story. This part of the story really displays Ransom Riggs' skill as a writer. Here are some of the impressions he put in Jacob's head at the sight of the ruin. 'What stood before me now was no refuge from monsters but a monster itself, staring down from its perch on the hill with vacant hunger. Trees burst forth from broken windows and skins of scabrous vine gnawed at the walls like antibodies attacking a virus, as if nature itself had waged war against it, but the house seemed unkillable.' My review is here.

The stately old Southern plantation mansion was spared the torch during the Civil War, but Scarlett O'Hara finds it's been ravaged anyway. Its treasures have been stolen and it's grounds destroyed. During the very long story, she works hard at seeing her beloved home restored to its former glory, but the conquest is an anti-climax. Some believe Tara really represents its owner, beautiful but completely bereft of joy and happiness.

This is the wonderful, heritage listed place where eccentric author Raymond Blythe lived with his three daughters. Parts had been burned down before, but never the entire place. That is not until the end of 'The Distant Hours' when Percy, the eldest of the ancient twins, decides that the castle has served its purpose, along with her and her sisters. She's the one who strikes the match and turns it into their burial place. My review is here.

If you're a canny reader, you can see it coming. L.M. Montgomery was bound to sacrifice Silver Bush, because her heroine Pat had always loved it too much, to the extent of placing it above the people in her life, including the man she didn't realise she was in love with. Pat's sister-in-law accidentally left a candle going and burnt the place down. But LMM made it pretty clear that's what it took to help Pat realise that there was life beyond Silver Bush. She took being a homebody to a whole new level.

This is a more modern pick, from one of my favourite authors, Julie Klassen. Yeah, you guessed it, it burns down, just like the others. Since the building itself is regarded as important enough to be mentioned in the title, that's often a clue that it's doomed. Here is my review.

However, not always. Here's one that arguably should have been destroyed but wasn't.

8) Wuthering Heights
After all that went down beneath its roof, Emily Bronte decided to leave Heathcliff's house of hell standing. Good on her for that. It was an original stroke, considering how many other authors possibly wouldn't have left it alone. Not only is Wuthering Heights still standing by the end, but the two remaining members of the younger generation have made some major repairs and planted a flower garden. In a way, I guess that's one in the eye for Heathcliff. Check out my review.

And just to finish off with, I'll give you the reverse. A home that shouldn't have been burned but was... in the movie version!

It occurs in one of the weird, additional add-on scenes to the movie version of 'Harry Potter and the Half Blood Prince.' Although it never happened in the books, the Death Eaters torch the Weasley home to the ground in a failed attempt to harm Harry, who they know is staying there. You might remember images of Bellatrix Lestrange setting her ring of fire, and then doing her wild victory dance around the house as the place set. Don't leaf through the book to find out where it happened, because it didn't. The writers of the screen version simply succumbed to the temptation to make a visually impacting spectacle of the Death Eaters' evil, as if we hadn't figured it out already.

So those are my picks. Have you read any of them? Or can you add a doomed house or two of your own to the list. I'd love to hear about it.