'The Yellow Room' by Jess Vallance 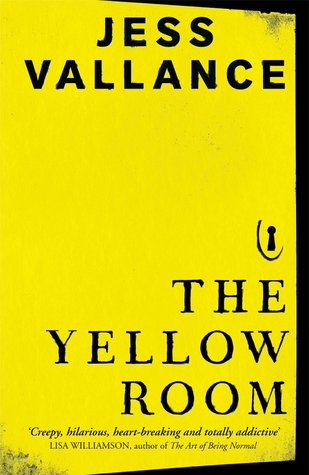 Sixteen-year-old Anna receives a letter from her father's girlfriend telling her he has died and asking to meet. Anna is drawn to Edie: her warmth, her character, her ability to rustle up delicious meals, all of which her own mother is seemingly incapable of... and the way she can tell Edie the secret that is buried inside her.A tautly told, compelling tale about mothers and daughters and the lengths that some will go to, to make their dreams come true.

MY THOUGHTS:
Whoa, so hard to discuss this novel without plot spoilers, but I'll do my best, or at least make them smallish ones which intrigue rather than big ones which reveal things I shouldn't. I won't say anything about the significance of the title. You have to wait to find out.

This novel is original in both concept and execution. It's written in a lighthearted and easy-flowing manner with plenty of humorous observations, yet the subject matter gives it a creepy and sinister undertone. The chapters are short and often end on mini cliffhangers, compelling us to read just one more. There's always a feeling that things will turn out to be far more sinister than 15-year-old narrator Anna Roddick thinks they are on the surface. This is mostly due to her relationships with two other main characters in particular.

Anna barely remembers her father, who left when she was small. One day, a letter announcing his death arrives from his heartbroken girlfriend. Although Edie Southwood is a complete stranger, Anna agrees to meet her and quickly warms to her, as Edie is naive, childlike and slightly whacky in a lovable way which makes Anna want to help her. Edie soon becomes one of the most positive influences in Anna's life, but is the woman all she appears to be?

The other main plot thread is Anna's reluctant relationship with Leon Jakes-Field, an intense boy with literary aspirations. He is blackmailing her into being his friend, with some evidence based on an accident that may mean big trouble for her if he chooses to share it. In all my reading, I haven't come across many characters quite like Leon. He's thoroughly despicable, but also needy and lonesome enough to believe he can force someone into providing the affection he craves. As Anna rightly observes, 'How can compliments made under duress mean anything to him?' I feel Jess Vallance introduces what we guess might be the nerdy boy stereotype, but turns it into something totally unexpected, multi-layered and original.

Anna herself has a depth of kindness which makes it easy to love her as the main character. She hates letting people down and chooses to make things easy for others whenever she can. This is shown to be her most positive trait and also her Achilles Heel. It's her warm heart and good intentions that get her drawn into situations she later finds hard to escape from. Would people choose to attach themselves to Anna if not for the goodness she radiates?

Her relationship with her mother Anita is also an interesting study. They are simply living beneath the same roof. Anita is a genetics researcher immersed in her research to the extent that she considers brief interactions with Anna as a distraction and nuisance. She focuses on the wider good of humanity to the point where she's blind to the pressing needs of her daughter, who is right there at home. Anna perceptively realises that caring for her daughter is not high profile enough for Anita, since it receives no accolades. Anna, as a contrast, considers herself completely average in every way and struggles to come up with ambitions for her life.

So although the story is quite simple on the surface, it's a chilling urban drama which could leave us discussing motivations, deep psychological states, and complex relationships for a very long time. Both major and minor characters are three-dimensional. And it really shows how fine the line may be between simple admiration, and obsessions which lead to mental instability or cruel manipulation from otherwise smart characters who stop thinking straight. I found it easy to read within a day.