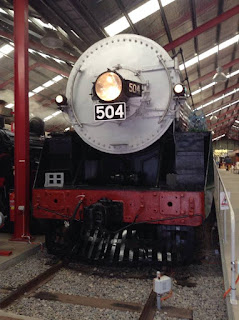 This list is inspired by a visit to the Port Adelaide Railway Museum over the weekend.

It's always come across as a romantic mode of transport. I'd be willing to bet that's because it's a highly sensual way to travel, often involving all five of our senses. The sight of the engines and carriages themselves are beautiful, not to mention railway tracks disappearing in the distance, making the idea of faraway places very tangible. There's the sound of whistles and clacking movement along the track, the smell of diesel fumes, the feeling of warmth from the fires and steam in the engine, or the flecks of soot getting into passengers' eyes. As for taste, well, not every mode of transport offers dining cars, do they? And rail travel can also inspire great creativity. Don't forget, J.K. Rowling got her inspiration for the Harry Potter series while traveling in a train.

The sensual nature is probably why railway travel features strongly in literature. I sat down to brainstorm my list, and when I finished, something interesting stood out. With just a few exceptions, most of them are kids' stories. I wonder if the authors realise instinctively that train stories will appeal to the sensual natures of young readers. Here they are. Please let me know if you can think of any others. 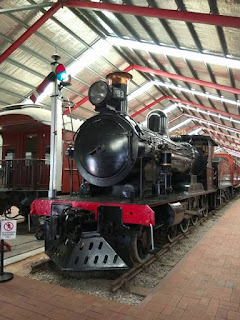 1) The Orient Express
I read Agatha Christie's 'Murder on the Orient Express' in my early teens. I remember being keen to keep returning to the diagram with the layout of the train, including the passengers' sleeping berths, to try to figure out who committed the crime. Bad luck for them Hercule Poirot was aboard, or they might have got away with their plan.

2) The Hogwarts Express
I love the sections in Harry Potter stories when the students converge on Platform 9¾ at King's Cross Station to return to school, because something intriguing often happens aboard the train. There's the time in Harry's third year when the dementors gatecrash, to everyone's terror. And at the start of his sixth year, Professor Slughorn sets up his elite 'slug club' in one of the compartments, and then Harry decides to eavesdrop on his Slytherin peer group. Then in the next generation, Albus and Scorpius become the first students who ever manage to go AWOL from the train.

3) The Starlight Express
I never actually saw this live, but love the concept. A toy railway set magically comes to life, and all the engines compete to become the fastest in the world. It would be fascinating to see the actors performing this on roller skates.

4) The Polar Express
I remember watching this with my kids around Christmas Time. The train is on the way to the North Pole, picking up a variety of children who decide they may as well go along for the ride, and there is plenty of drama concerning lost tickets and sights along the way.

5) The Railway Children
I read this story and also saw the movie long ago in my childhood. My memory is sketchy, but there were three siblings, Bobbie, Phyllis and Peter, whose father was wrongfully imprisoned for suspected spy activity. They move to Yorkshire, where they live near the railway and befriend an old man who is eventually able to help prove their dad's innocence. There are several scenes in which the kids walk and play along the railway tracks.

6) The Little Engine who Could
I doubt any pre-school child ever missed out on the story of this brave little guy who encourages us all never to give up. Even when we're huffing and puffing our hearts out as we climb whatever mountains we face in our lives, we'll make it to the top if we don't quit. Although 'I think I can, I think I can,' won't work for every situation, it's not a bad motto for those times when there are daunting tasks we absolutely must complete.

7) Thomas the Tank Engine and friends
Just the thought sends me back in time to the 90s. My eldest son in particular loved these guys. He knew each single one of them, and their character strengths and weaknesses. He also collected quite a number of small merchandise trains from this franchise. And the theme song from the ABC series fills my head as I think about them, along with, 'He's a really useful engine, you know.' Those were the days.

8) Little House on the Prairie
Travel by rail was cutting edge technology in these times. In her book, 'By the Shores of Silver Lake', Laura Ingalls Wilder describes an interesting time when she caught the train with her Ma and sisters to join their Pa, out further west. I'm impressed now, but wasn't at the age of 10 or 11, when I read how scary and fast they found the movement, at 20 miles per hour. I dismissed them as wimps, without making any allowances for the horse and buggy travel they'd been used to.

9) Anne of Green Gables
Even though rail travel isn't featured specifically, it was obviously the most significant way of traveling long distances around Prince Edward Island. In one of the most iconic moments near the start of the story, poor little orphan Anne waits with her scruffy carpet bag at White Sands station, for Matthew Cuthbert to come and get her.

10) The Girl on the Train
I haven't read this recent best seller yet, and don't know if I ever will. I just thought I'd add it to this list, since there's a train in its title. I know the basic blurb. The main character, Rachel, travels by train past her old house, where her husband now lives with the woman who has supplanted her. I'm not sure it appeals to me, but if you've read it, let me know what you thought.

11) Miss Peregrine's Peculiar Children
Train travel becomes very important in this series. In Hollow City, it was urgent for the little gang to board a train bound for London, in a race against time, but they are initially bullied by the snobbish staff at the station. At last Horace manages to purchase an entire first class carriage for them, but they are destined not to board, due to the most dramatic plot twists. When they eventually do get to enjoy their first class travel, you can't help thinking they thoroughly deserve it. But it's not even the end of their terror on the rails, which extends into the final installment, Library of Souls. I love Enoch's line, 'If one more person tries to stop us getting on this train...' 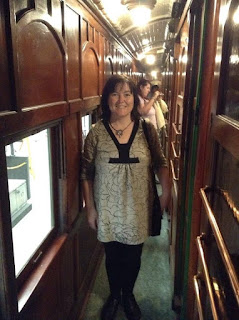 I'll finish off by mentioning the work I'm doing on my grandfather's story, which strongly features trains. His father (my great grandfather) migrated to Australia from Britain with a wife, three small sons, and no idea how they'd support themselves. He found work with the South Australian Railways, where he remained loyal all his life, and all of his sons but one followed in his footsteps. That one happened to be his youngest, my grandfather. But all my great uncles (and there were many more by then) joined their father with the SA Railways, some living interstate for a while, some working at the Islington workshops in Adelaide, and all expressing gratitude for such good work.

I'm looking forward to sharing it in time.
Posted by Paula Vince at 5:00 AM