'The Undoing of Saint Silvanus' by Beth Moore 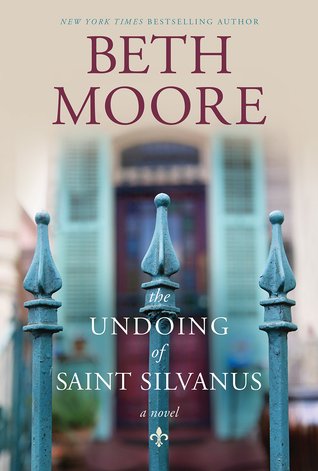 Only God knew why Jillian Slater agreed to return to New Orleans on the news that her father had finally drunk himself to death. It's not like they were close. She hadn't seen him--or her grandmother, the ice queen--in almost 20 years. But when Adella Atwater, the manager of her grandmother's apartment house, called and said Jillian's expenses would be paid if she'd fly in for the burial, a free trip to New Orleans was too intriguing to resist.

What Adella didn't tell her was that the apartment house wasn't a house at all and, whatever it was, bore the dead weight of a long and painful history. As soon as Jillian meets the odd assortment of renters and realizes that her grandmother had no idea she was coming, she hatches a plan to escape. But the investigation into her father's death quickly unfolds and Jillian is drawn into the lives of the colorful collection of saints and sinners who pass through Saint Silvanus. She soon discovers there is more at stake than she ever imagined. Who is behind the baffling messages and the strange relics left on the steps? Is it possible that her family is actually cursed? Or is it just this crazy old house that holds them all under its spell?

MY THOUGHTS:
I was one of the unobservant readers who didn't notice the fine print, that this is just a sampler of the whole story. It's the first few chapters, in fact, set to warm us up for the rest. It explains why the blurb sounded so complex and comprehensive for the short read I found on my kindle. If we want the rest, we'll have to hang out for the whole book.

The gist of the story managed to be squeezed in fairly well. Jillian works at an upmarket cafe, and her boss Vince is also her boyfriend. One day she receives news that her estranged father Rafe has been discovered dead with a stab wound. For some reason, Rafe was a scruffy, homeless vagrant, but we don't get to find out his backstory within the scope of this sample. Jillian goes off to visit her grandmother, Olivia Fontaine, who was Rafe's mother. Olivia runs a small boarding house which used to be a beautiful old church.

The first person Jillian meets is Adella, who works for her grandmother and seems to know a lot more of what is going on than you'd expect from the average employee. There is also David Jacobs, one of the tenants, but we don't get to find out much about him yet. We've also been introduced to couple of policemen who may or may not become main characters. There's Sergeant Cal DaCosta, who has a history of heavy drinking, and his close friend and former partner Frank Lamonte. They were among the first on the murder scene.

My impression so far is that many of the characters seem to display more exaggerated and over-stated reactions than circumstances seem to call for. Jillian seems rude and touchy with Adella, considering she's only just met her. And I don't know if this will come out later, but I don't get why Jillian is so adverse to setting foot in a church, especially one which has been re-furbished as a dwelling.

I do get the feeling that the plot will be full of twists and turns, and if somebody offered to tell me what was going to happen, I'd be interested to hear it. But from what we've been given, I haven't warmed up to any of the characters enough to really care much. By this far in to a story, I really like to have someone to identify with, admire and find myself hoping the best for. Since that hasn't happened yet, I really don't know if I'd want to pick up the remainder of the book if given the chance. Especially when I see the total is set to be 480 pages long. That's a long time to spend with characters who might not grow on you.

Thanks to Tyndale House for my review copy