'The Birdman's Wife' by Melissa Ashley 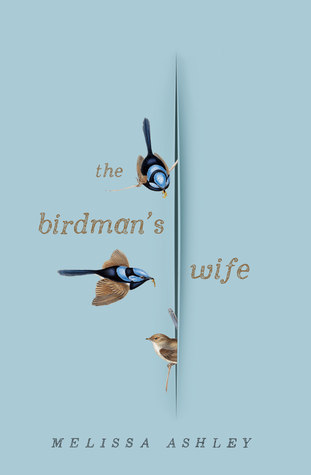 Inspired by a letter found tucked inside her famous husband’s papers, The Birdman’s Wife imagines the fascinating inner life of Elizabeth Gould, who was so much more than just the woman behind the man.Elizabeth was a woman ahead of her time, juggling the demands of her artistic life with her roles as wife, lover and helpmate to a passionate and demanding genius, and as a devoted mother who gave birth to eight children. In a society obsessed with natural history and the discovery of new species, the birdman’s wife was at its glittering epicentre. Her artistry breathed life into hundreds of exotic finds, from her husband’s celebrated collections to Charles Darwin’s famous Galapagos finches.Fired by Darwin’s discoveries, in 1838 Elizabeth defied convention by joining John on a trailblazing expedition to the untamed wilderness of Van Diemen’s Land and New South Wales to collect and illustrate Australia’s ‘curious’ birdlife.From a naïve and uncertain young girl to a bold adventurer determined to find her own voice and place in the world, The Birdman’s Wife paints an indelible portrait of an extraordinary woman overlooked by history, until now.

MY THOUGHTS:
I requested this title not knowing what to expect. It turns out to be faction novel based on the life of nature artist Elizabeth Gould, and told in her own voice. Elizabeth was married to British ornithologist John Gould, and produced hundreds of scientific illustrations for his works, most of which were birds. This novel is not only thick but dense with detail, so don't start it if you're not committed. Having said that, here are all my reasons for ranking it 5 stars.

1) The cameo appearances from other famous historical figures of their time are great fun. There's Edward Lear, shown as a clever, talented young man with a flair for the comical, and Charles Darwin, a celebrated scientist recently returned from his collecting expedition on the HMS Beagle. He inspires John to want to embark on their own, once in a lifetime Australian expedition. There's Sir John Franklin, the governor of Tasmania, and his powerful and scientific wife Lady Jane, who even leads expeditions of discovery.

2) Elizabeth's voice always comes across like that of a nineteenth century woman. She notices the things they'd notice, and doesn't notice things a more modern woman might. This shows how deeply immersed in her character the twenty-first century author must have been while writing it.

3) The husband/wife partnership is interesting to read, and their essential character differences are highlighted. John is depicted with a good natured manner, yet he's still a driven fanatic, and taxing task master to his staff of helpers, including his wife. Elizabeth is kind hearted and endlessly grapples with guilt about having to kill birds and animals in the name of science. 'Few creatures were spared my husband's ambition.' She also admits that even though she's a woman of science, she still enjoys what she calls the 'myths of unenlightened men' including stories, legends, folklore and symbols.

4) It's good to learn the difficulties and expenses nineteenth century artists faced, so we can give them the respect they deserve. Elizabeth used all sorts of rare and wonderful ingredients to make her palette mixes accurate, including the imported urine of Brahmin cows which had been fed special mango leaves. Seriously!

5) The pages of notes by Melissa Ashley at the end shows how this project became her consuming passion. She was already an avid birder, but set herself the task of learning the different, complex art techniques and lithography, to help bring Elizabeth's voice to life. She even became a volunteer trainee taxidermist, to add authenticity. That's commitment!

6) I recorded heaps of quotes, but will choose to share just this one, about our passions and how the things we spend our days doing end up becoming our identity. Elizabeth said, 'I painted, I studied, and in this constant striving, became me.' Although she died sadly young, it can be argued that she'd lived a fuller life than many ladies in their eighties or nineties. Also, I've got to appreciate the way Melissa Ashley gave a voice to this remarkable lady whose name had been eclipsed by her husband's fame for over a century.

7) One of my favourite features of this book is that it helped cure my own wanderlust and discontentment. The Goulds sacrificed so much to travel to Australia, a journey many thought they were mad to undertake. Elizabeth's maternal heartstrings were torn when she had to leave her three younger children with relatives for two years, since the gruelling voyage would likely have proven too taxing for them. Yet when they arrived in Australia, their wonder and delight with the flora and fauna which is so familiar to me is described brilliantly. Nowhere else in the world is like it, and I don't have to go through all they did to appreciate it, since I'm already down here.

The chapters in the story are all named after the different birds that surround me each day. Superb fairy wrens, sulphur crested cockatoos, red wattlebirds, willy wagtails, honey eaters, zebra finches, Major Mitchell cockatoos, just to name a few.  There's some touching reminders that the nation must remain poles apart from the rest of the world. On the way back, the Goulds' healthy specimens perished in transit, including kangaroos, wombats, koalas and possums, as well as birds. Once again, what a wonderful ecosystem we Aussies get to enjoy. I wouldn't have expected a novel named 'The Birdman's Wife' to give my patriotism a boost, but that's just what it did.

Thanks to Simon and Schuster (Australia) and NetGalley for my review copy.