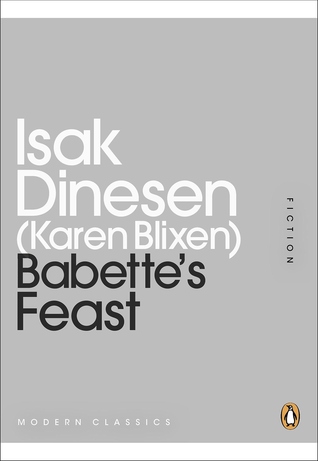 2015 Reading Challenge, Week 22 - A Book you can finish in a day.
A day? You can read this little story in an hour. It's only 54 pages long, and has become a classic and a movie.

With the mysterious arrival of Babette, a refugee from France's civil war, life for two pious sisters and their tiny hamlet begins to change. Before long, Babette has convinced them to try something other than boiled codfish and ale bread: a gourmet French meal. Her feast scandalizes the elders, except for the visiting general. Just who is this strangely talented Babette, who has terrified this pious town with the prospect of losing their souls for enjoying too much earthly pleasure?

MY THOUGHTS:
Martine and Philippa are austere, elderly sisters who still retain traces of their former ravishing beauty. Their father was a strict Puritan minister, and they had devoted their lives to serving with him. Babette is their unassuming French maid who has won a windfall in the lottery. Instead of leaving the sisters, as they fear, she chooses to treat them and their guests to a sumptuous feast. Although all the money will be blown in one night, Babette insists there is nothing she would rather do. Martine and Philippa have serious misgivings, but let her go ahead.

A story doesn't have to be long to pack a powerful punch. For a start, you can almost smell the fragrance of the French banquet cooking. She intends to serve dishes such as Potage a'la Tortue (Turtle Soup), Blinis Demidoff (pancakes with caviar) and Cailles en Sarcophage (quail in puff pastry with truffle sauce), along with the best vintage wines. To me, the story is also full of far-reaching, theological analogies.

a) Appearances can be deceptive. How ironic that the sisters initially assumed they needed to give Babette cooking instructions, and how obediently she always stuck to the limit they set. God may do the same with us, if we insist He stays in a box. It also shows us not to underestimate those who appear quietest and most humble.

b) The presence of Lorens Loewenthielm at the dinner is significant. He's a King Solomon type of character, having achieved everything he'd ever striven for. Decorated, admired and envied, only he knows the depth of his own emptiness. He alone of the guests has the background to grasp the incredible gift of grace which is taking place. Babette is far more than the person the others think she is. And those who think they're extending grace may, in fact, be recipients of a far larger grace. Most of the others only went along to humour the sisters and their strange housemaid, described as 'the dark Martha in the house of their two fair Marys.'

c) The biggest point of all is that grace is infinite. Even Martine and Philippa, who consider such luxurious fare a sinful sign of excess, are lavished with the gift. They don't realise the magnitude of what haggard, wild-eyed Babette is giving them - yet she still chooses to give it. Grace is not contingent on what we have figured out or done, in other words, how deserving we are. It makes no conditions and singles out nobody in particular. (Get the sisters' vast understatement, 'It was quite a nice dinner, Babette.')

Maybe stories such as this is what it will take to impress some truths on some readers. It reminds me of the parables of Jesus, which he claimed to have told for the same reason. Yes, I can imagine him beginning, 'There were once two elderly sisters who were still very beautiful. And they had a maid...'
For a story such as this, short is perfect.