'How to be Good' by Nick Hornby 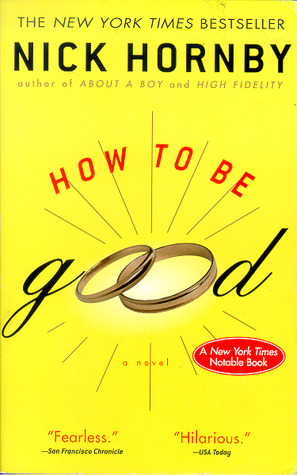 2015 Reading Challenge, Week 24 - A book your Mum loves.
Early on, I asked my mother for some recommendations, and she had a mental blank, telling me she'd have to get back to me on that one. Knowing she gets flustered when put on the spot, I thought I'd tackle this category later. However, on a recent visit, she offered me this book which she borrowed from a friend. Mum thought it was funny and very easy to read. And I knew it would cover my challenge for this week without even having to remind her about it.

In Nick Hornby's How to Be Good, Katie Carr is certainly trying to be. That's why she became a GP. That's why she cares about Third World debt and homelessness, and struggles to raise her children with a conscience. It's also why she puts up with her husband David, the self-styled Angriest Man in Holloway. But one fateful day, she finds herself in a Leeds parking lot, having just slept with another man. What Katie doesn't yet realize is that her fall from grace is just the first step on a spiritual journey more torturous than the interstate at rush hour. Because, prompted by his wife's actions, David is about to stop being angry. He's about to become good--not politically correct, organic-food-eating good, but good in the fashion of the Gospels. And that's no easier in modern-day Holloway than it was in ancient Israel.
Hornby means us to take his title literally: How can we be good, and what does that mean? However, quite apart from demanding that his readers scrub their souls with the nearest available Brillo pad, he also mesmerizes us with that cocktail of wit and compassion that has become his trademark.

This has the title of a very audacious self-help book, but it's fiction.

Katie Carr likes to think of herself as a good person, and uses the fact that she's a doctor to prove it. Shouldn't helping people as your career cover a multitude of sins? One day, her grouchy husband, David, decides to throw off his normal attitude and take the concept of goodness to a whole new level. He's been healed by a faith healer named 'GoodNews' and together they aim to revolutionise the world with their benevolent deeds. Katie is forced to ask herself whether her resulting irritation reflects badly on her or not.

It's a satire which shows how slippery the label of 'good' may be. David reasons that in general, we don't care enough, and look after ourselves while ignoring the weak and poor. Many people, myself included, have felt convicted by this fact. The Bible reminds us of it, after all. Yet we're prompted to ask whether David's goodness crosses the line into sanctimony. Can 'goodness' turn like whipping cream if taken too far, and lose its value? Some of their exploits, such as convincing hapless neighbours to take homeless youth beneath their rooves, have unexpected consequences.

It's set in London, and so British I could clearly imagine their accents. I like Katie's family. Tom, the ten-year-old, is described as having the personality of a child prodigy, but without any evident talent. It becomes clear that his talent is his clear-sighted ability to pinpoint the real motives of those around him. Eight-year-old Molly is a sweetheart who is willing to go along with whatever is happening, to please people, but is her dad making her into a monster? And is showing up her brother part of her goodness? Then, there's poor old David, who forces himself into the mold of Barbie's Ken, but without the rugged, good looks and contoured body.

My best takeaway is that living a good life may take less effort than we think, as familiar people around us could well be suffering, unnoticed. Making the effort to go out specifically to look for strangers to help may not be required. For example, Katie chances upon her brother, Mark, and realises how depressed he's been. Doing simple gestures for people already in our lives may have more impact than we'd imagine. The events of the story also make us see that it's not just okay, but appropriate, to say no at times. As well as being about goodness, I think the story is about being happy with what we've got.

I'm impressed that a male author can write authentically in first person from a woman's point of view. It doesn't happen very often, and I think he got into her head pretty well. It's not the sort of book I'd remember forever, but does meet its aim pretty well.