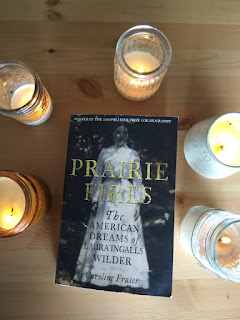 The first comprehensive historical biography of Laura Ingalls Wilder, the beloved author of the Little House on the Prairie booksOne of The New York Times Book Review's 10 Best Books of the YearMillions of readers of Little House on the Prairie believe they know Laura Ingalls—the pioneer girl who survived blizzards and near-starvation on the Great Plains, and the woman who wrote the famous autobiographical books. But the true saga of her life has never been fully told. Now, drawing on unpublished manuscripts, letters, diaries, and land and financial records, Caroline Fraser—the editor of the Library of America edition of the Little House series—masterfully fills in the gaps in Wilder’s biography. Revealing the grown-up story behind the most influential childhood epic of pioneer life, she also chronicles Wilder's tumultuous relationship with her journalist daughter, Rose Wilder Lane, setting the record straight regarding charges of ghostwriting that have swirled around the books.

MY THOUGHTS:
Wow, I was quite blown away! This book truly deserves its Pulitzer prize for biography this year. Caroline Fraser has pieced together such a thorough picture of Laura Ingalls Wilder's life from start to finish, drawing on documents, photos, memories and artifacts she must have sourced from far and wide. It's such an involved and in depth read I could easily keep going back over it finding new discoveries each time. But for now my head is still full of what I took on board this first time.

I think we've probably all heard that Laura's life was harsher and rougher than her books depict, but I was pleased to see that the parts she chose to include are accurate on the whole. She just focused on them and dispensed with other, sadder and more squalid times she didn't think young readers needed to hear about. Some might consider it airbrushing or misrepresenting through omission, but to me it sounds like a pretty good way of looking back over your life. Isn't it the same thing we all do on our social media profiles anyway? The characters of all the family members we came to love were spot-on anyway, which is one of the main things.

The whole debate over objective versus subjective truth is addressed fairly thoroughly. Laura's brand of truth draws more on her personal memories, feelings and convictions, rather than dry facts and chronological events. Even her research consisted more of recalling what particular flowers smelled like rather than verifying specific dates. Fraser says, 'The freedom she took with the facts was the creative act of a novelist.' Laura and her daughter Rose agreed to regard truth as the meaning underlying a story, and included the parts they felt illustrated that most. I'm fine with that. It seems Rose Wilder Lane crossed a line at times though, when she wrote some unauthorised biographies of famous people with dodgy accuracy issues. But that's different from her mother's biographical fiction, which is based strongly on fact and pretended to be different.

We are given a whole new way of perceiving Rose. Whoa, what a piece of work she appears to have been! Perhaps Caroline Fraser just wasn't a fan, yet since she draws from all sorts of written correspondence to paint Rose's picture, I think there must be some truth in it. It seems she was headstrong and snobby from a young age, showing insubordination to teachers and other authority figures. In her letters, Rose comes across as a person who wanted, consciously or not, to undermine and patronise her mother. She was adept at dealing out both compliments and criticism in the same sentence. She seemed to snatch every chance to remind Laura that she was the expert in the industry, and should call the shots. Rose was extremely focused and ambitious, working brutally long hours and making heaps of illustrious contacts. She was also volatile and moody, insisting on doing her own thing.

How a placid, tranquil guy like Almanzo could have had such an overbearing, high-maintenance, control freak for a daughter might turn out to be one of life's big mysteries. If Rose was a Hogwarts student, I'm pretty sure she'd be sorted into Slytherin House, but I'm not saying that meanly. Like all of us, she must have had a mixture of dark and light, negative balanced with positive. Her correspondence indicates that she was both bossy and needy at the same time, with generous moments and highly resentful ones all tied up together. And I'm sure she'd defend herself by saying that she always meant well. Perhaps she did draw on the type of tenacity her dad used years earlier when he went off between blizzards to get that wheat.

People have wondered about the professional relationship between the mother and daughter team, with theories floating about that Rose even ghost wrote all her mother's books! The actual preserved letters puts it all to rest. Laura was the author of the Little House series and Rose was the editor. I haven't read 'Let the Hurricane Roar' or any other fiction by Rose, but the general consensus seems to be that she was not the gifted storyteller her mother was. She was definitely a sharp and professional editor though, with contacts in high places. The text points out that their different styles were unmistakable. Laura wrote the 'plain, unadorned, fact based' tales we all love, while Rose's writing was more polished, dramatic and stylised. They managed to bring their strengths together, and it's clear we'd never have had the beautiful Little House series with just one and not the other. Although they had their share of personality clashes, they ended up creating something to be very proud of.

Laura's life with her Pa, Charles Ingalls, fascinated me, since I loved him in her books. Fraser says, 'He never seemed to realise that his ambition for a profitable farm was irreconcilable with a love of untrammeled and unpopulated wilderness.' But his love for his family and his deep and profound contentment covers up those disastrous decisions and mistakes he made. 'By standards of material success, he was an abject failure, but an outstanding man measured by his family's love for him.' In my opinion, that puts Charles way ahead of many men we hear about who have these things the opposite way around.

Laura had her fair share of histrionics and temper tantrums it's revealed, which doesn't surprise me much, given her stubborn and determined nature in the books. It seems Almanzo sometimes felt the need to retreat to his stubble field for peace from the women in his life. He reportedly said to a visitor, 'I knew when I married her she had a temper. You just get used to these things.'

We're told Rose had trouble teaching her dad to drive a car, since he was so used to his beloved horses. He jammed his foot on the brake, tugged hard on the steering wheel and called, 'Whoa!' causing her to fly through the windscreen. The book is full of such anecdotes, which makes me want to read it over again already. The deep love and affection between Laura and Almanzo, over their marriage of 64 years, sticks with me. Some people reported that she would shout at him and worry him with all sorts of things that came into her head, but they were so committed to each other, their different personality styles didn't matter, and I'll always think of them of one of my favourite romances from literature.

Caroline Fraser ended her book with a fantastic tribute to Laura and her books that I'll write out in full. 'If Wilder's life was triumphant, it was a different kind of triumph than we are accustomed to recognising. She wrote no laws, led no-one into battle, waged no campaigns. If we listen to her, we can hear what she was telling us. Life in frontier times was a perpetual hard winter. There was joy - riding ponies, singing hymns, eating Christmas candy - but it was fleeting. There was heroism, but it was the heroism of daily perseverance, the unprized tenacity of unending labour. It was the heroism of chores, repetitive tasks defined by drudgery. Cooking and eating the same fried potatoes, day in day out. Washing dishes in dirty water. Twisting hay with hands so cracked they bled. Writing with a blunt pencil on a cheap tablet.'