'Bridge of Clay' by Markus Zusak 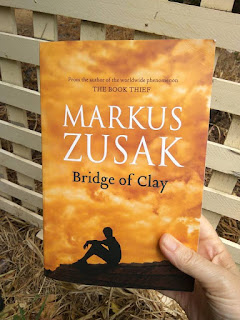 The breathtaking story of five brothers who bring each other up in a world run by their own rules. As the Dunbar boys love and fight and learn to reckon with the adult world, they discover the moving secret behind their father’s disappearance.

At the center of the Dunbar family is Clay, a boy who will build a bridge—for his family, for his past, for greatness, for his sins, for a miracle.

The question is, how far is Clay willing to go? And how much can he overcome?

MY THOUGHTS:
Whew, how do I tackle this mammoth that was so long in the pipelines? It's like a celebration of testosterone.

I was privileged to attend a book talk with Markus Zusak, and have my copy signed. He discussed his 13-year-long writer's block, from the time he finished The Book Thief (see my review) until now. The dry period turned out to be longer than his two kids have been alive, and they never believed their Dad would write a new novel ever. But now that he's finished, he says Bridge of Clay is like his heart and soul poured out onto the paper. With such a perfectly honest admission about an author's vulnerability from his own mouth, I was keen to get started. The most likely reason it took so long struck me from the start. It probably had to! Zusak is not any common author, but a finely-tuned wordsmith whose storytelling sweeps into poetic imagery on almost every single page. I get the strong impression that no word is there by accident. They were all considered with meticulous care, and only got to stay if they made the grade. Since his fictional Dunbar boys have inherited a deep regard for Homer's classical poetry from their mother, it's probably intentional that their own story should read like an epic too.

But there's nothing complex about the plot, and on the surface, no reason for such sweeping language. Maybe it's to show that all of our common, everyday stories can be painted with beauty and depth. The five young Dunbar brothers have lived alone since their mother passed away and their grief-stricken father suddenly left home. Or as the book puts it, 'Their mother was dead and their father had fled.' One day after an absence of several years, their father Michael returns out of the blue, and asks the boys to consider helping him build a bridge on his rural property. Four of them refuse in no uncertain terms, hurt by his desertion and indignant at his nerve. But the fourth brother, 16-year-old Clayton, re-considers and decides to take up the challenge.

In a way, he agrees to work on more than one bridge. The physical one that spans the river, and an invisible, spiritual bridge that helps the family bond together again.

The best part by far is the rough interaction between the five brothers, and the gruff, insulting Aussie male way they relate to each other, which really masks deep affection. I have sons and nephews, and the Dunbar boys ring true for me. Even while they communicate with verbal put-downs and sarcasm, not to mention rough and tumble physical knocks, they all understand the underlying message that they can trust and depend on each other. Even when Clay seems like a traitor for taking up their father's offer, they know he really isn't.

All five are different, but make one very cool whole. There's Rory the tough guy, and friendly, talkative Henry with a knack for earning money. Then there's vulnerable little Tommy, the youngest, with his trail of pets. But quiet, restless, deep-thinking Clay is presented as the book's real hero. I think my favourite is actually Matthew, the modest narrator, who's always careful to keep himself in the background of his brother's story. To me, he's obviously the family backbone and glue, partly because his position as eldest forces him to take on the role of family breadwinner and caregiver. It's a pretty heroic responsibility for an 18-year-old, but he blunders along instinctively, doing it well. And of course he's the one with Markus Zusak's impressive way with words, since Zusak gives it to him.

There's lots of weaving between different time periods, which stops being confusing when you get into it. There's the present when the story starts, the not-so-distant past, while the boys were all shacking up together, and the more long-ago times when their parents were young. We get a feel for when each chapter happened. I like the apparently haphazard approach, because it highlights that random events may be more than mere coincidences. All sorts of seemingly casual brushes with others can really be destiny calling.

There's an abundance of great pets in the Dunbar household. Animals always make a story come alive, so it's great when authors use them. My favourites are Hector the cat and Achilles the mule. Their comic presence is a great relief from more tragic parts of the book. (Sob, Markus Zusak, what did the main female characters ever do to you?)

I'm glad he set this book in Australia, since our beautiful country deserves such excellent, descriptive lines as, 'Cars were stubbed out rather than parked, and the powerlines drooped from the weight of mute, hot and bothered pigeons.' But it was definitely a relief to finish, and left me wondering if there's such a thing as an overdose of wonderfully written prose. Aussies like me sometimes tell stories about being wowed by the majesty of ancient cathedrals and castles in Europe and England, but eventually reaching saturation point. Maybe after almost 600 pages, I was almost saturated with Zusak's brilliant, descriptive storytelling methods, so it's good that he stopped when he did.

I definitely give it a high recommendation.