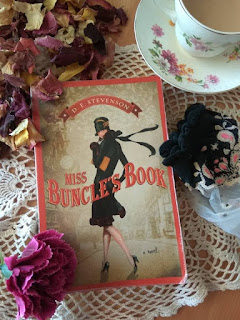 Barbara Buncle is in a bind. Times are harsh, and Barbara's bank account has seen better days. Stumped for ideas, Barbara draws inspiration from fellow residents of her quaint English village, writing a revealing novel that features the townsfolk as characters. The smashing bestseller is published under the pseudonym John Smith, which is a good thing because villagers recognise the truth. But what really turns her world around is when events in real life start mimicking events in the book. Funny, charming, and insightful, this novel reveals what happens when people see themselves through someone else's eyes.

MY THOUGHTS:
This is a good recommendation for those who enjoy books about village folk in small, country communities. (Think Avonlea, Middlemarch, Cranford.) It would have been a good choice for the the Comedy Classic category of the upcoming  Back to the Classics Challenge 2019, but I've just missed out by finishing it in December. If you're brainstorming good classic comedy titles though, this one fits the bill.

Miss Barbara Buncle has found herself struggling to make ends meet, and thinks she might have a go at writing a novel. To her relief, Mr Abbott from the publishing firm Abbott and Spicer loves it, and agrees to publish it under the pseudonym John Smith. But the real drama starts when Barbara's village neighbours of Silverstream begin to recognise themselves in the thinly veiled characters of Copperfield. Some think it's hilarious, while others are outraged and make it their personal mission to discover John Smith's true identity, so they can pay him out as he deserves.

But whenever anyone tries to figure out who he is, Miss Buncle's name never crosses their mind. She's the sort of person who doesn't slide onto anyone's radar because they perceive her as a meek, frumpy spinster. She's automatically eliminated from lists of townsfolk. Little do they know she's an expert people-observer with plenty of practice.

It's a simple story with fairly standard characters we recognise from sitcoms, although D. E. Stevenson might have been among the first to use them, since she wrote this in 1934. At the forefront of the crusade to unmask John Smith are Mrs Featherstone-Hogg, the snooty social climber, and Vivian Greensleeves, the heartless gold digger. There are great contradictory reflections such as, 'Mrs Horsley-Downs was a horrible character not the least like her, but it was obviously intended for her because it was exactly like her.'

It's clear that the novel becomes a wake-up allegory for the whole town, as folk see their real selves mirrored in the pages of Disturber of the Peace. On one hand, nobody knows us as well as we know ourselves, so we could take the book's portrayal with a grain of salt. But on the other, our closeness to our own self might create multiple blind spots, since we overlook and reason away a myriad of quirks and character defects. The sharp perception of someone else is like a slap in the face. If you're like me, the story might make you wonder how others perceive you, if you were to appear in a novel.

Miss Buncle's young neighbour Sally considers John Smith a heroic crusader, because he exposes humbugs and frauds for who they really are. Barbara Buncle is flattered by this image of herself as a public benefactor, since her only goal had been to earn a bit of money. She's a straightforward, childlike person, which is meant to make it funnier, since someone with more depth might have reconsidered showing everyone they know with warts and all. And a wiser author might have anticipated their indignation more, since their biggest and most secret faults are being revealed to the whole world. It's easy to understand why there was an uproar, and Barbara's never-ending naivety got a bit on my nerves.

After all sorts of awkward situations, the story ends in a very rom-com worthy way. The canny reader can see it coming a mile away, but it's still fun. For anyone who just wants to put their feet up and relax, it's a light, fluffy read with a bit of an edge. Good escapism for us, although not for the poor people of Silverstream.

One other gripe I had is a technicality. I don't usually get hung up over international spelling differences, but since this is clearly such an English story, why don't we have British spelling, instead of bumping up against words like parlor maid and characterization? Forcing something into an American shape sometimes feels wrong, and this is one of those times. Since American readers are enjoying the British place and characters, I'm sure they wouldn't mind dealing with parlour maid and characterisation just for a little while? That's my Australian opinion.

Anyway, it's a quick, cheery read and held my interest all through. It even taught me a bit about how far authors can go, when it comes to representing living people in novels. I think my favourite sub-plot was the story of young Sally and Ernest, the vicar.