'A Christmas Carol' by Charles Dickens 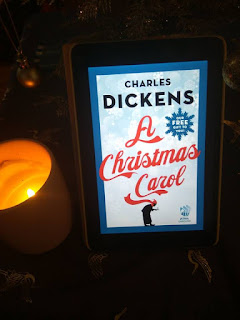 Dickens' story of solitary miser Ebenezer Scrooge, who is taught the true meaning of Christmas by a series of ghostly visitors, has proved one of his most well-loved works. Ever since it was published in 1843 it has had an enduring influence on the way we think about the traditions of Christmas.

MY THOUGHTS:
I wanted to include a classic Christmas story this December, and the plot of this one is a legend, of course. Scrooge's old business partner, Jacob Marley, used to be just as mean and tight-fisted as Scrooge, but he's belonged to the next world for long enough to grasp what's really important. Marley's ghost decides to pay Scrooge a visit to give him some tough love, with the help of three supernatural buddies who represent the three tenses of Christmas: past, present and future.

Some readers have mentioned one-dimensional characterisation. Can anyone really be as cranky as Scrooge, or as hearty as his nephew Fred, or as good-natured as Bob Cratchit, or as holy and angelic as Tiny Tim? I have no problems with it, because the season of Christmas is like a main character in its own right, which brings out the best and worst in everyone. We're getting a glimpse of these characters for a specific two days in the calendar, when they always put on their most extreme behaviour. (Anyway, I've come across real people who strike me as close matches. Sometimes people we meet in true life are more like caricatures than others might imagine.)

But wherever you stand, you've got to admit Charles Dickens succeeded in what must surely be just a distant dream for most authors. The name of his main character has now become a noun for a specific type of person. 'Don't be such a Scrooge.'

Ebenezer Scrooge considers himself a careful realist, but it progresses to stinginess. The narrator says, 'The heaviest rain and snow could boast the advantage of him in only one respect. They often come down handsomely and Scrooge never did.' His downfall was all in the name of looking out for himself, and I understand his reasoning, especially since he belonged in the Victorian era. When you make adequate provision for your welfare, you needn't worry about being destitute and alone in the future, right? But outcomes sometimes turn out to be the opposite of our aim. He's alienated everyone by his ungenerous spirit, and is headed for a very lonely death. 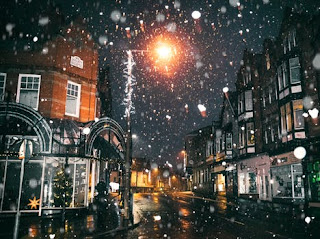 Dickens descriptions of London coldness add loads to the atmosphere. 'The fog came pouring in at every chink and keyhole... Candles were flaring in the windows of the neighbouring offices like ruddy smears upon the palpable brown air.' The Victorian winter would have been no fun to live through, but was certainly fun to read about.

You have to really read the book to get the impact of the different personalities of the ghosts themselves. Christmas Past is like a wise child-cum-old man, who can be snuffed like a candle. Christmas Present is a jolly giant, living it up and scattering cheer wherever he steps. And Christmas Future is like the silent and spooky Grim Reaper type we've all come across. Some reviewers think it's inconceivable that Scrooge could experience a total personality reversal in one night, but again I disagree. When the catalysts are as dramatic as this trio, wouldn't you?

I'll just summarise some of my favourite parts of what they show him.

One of my most loved themes pops up, the comfort of reading books. Lonely young Ebenezer, who was left behind at school over the holidays, reminds me of David Copperfield, another of Dickens' boys, as he sits quietly by the window reading stories. The way the scene plays out here is  so impressive from a nineteenth century author like Dickens. As the boy sits reading, a procession of his favourite characters pace past the window as if they're real, including Ali Baba and Robinson Crusoe. To think that was imagined straight from Dickens' head onto the page with no knowledge of on-screen entertainment is astounding. So is Scrooge's glimpse into the supernatural world of ghosts and spirits, who fill the outside world, often lamenting bitterly because they can no longer perform the good actions they'd like to. If only they'd done it while they were alive, hey?

There's good old Fezziwig, Scrooge's employer as a young apprentice, and the awesome staff party he threw. Fezziwig demonstrates the unequal effect of the mathematics of kindness. The ripple effect of one kind action can far exceed the effort it took in the first place. It was all over in one evening, but remained fondly in people's memories for decades. Even fleeting moments are valid, and Scrooge says so. 'His power was in words and looks, in things so slight and insignificant that it is impossible to count 'em up. The happiness given is as great as if it had cost a fortune.' I love that idea, because some of us can't afford to make grand, sweeping gestures, but it doesn't mean our impact will be any less when we do what we can.

It's no wonder this story has left several generations of readers with the idea that our own acts of kindness can be worthwhile, even if the scope isn't as huge as Scrooge's. Tiny Tim's whole life seems to rest on the treatment his father receives from his employer. It's easy to see why this novella took off and sold out its first printing, because it has touches of so much of the great stuff Victorians loved. Plenty of sentimental moralism, loads of Gothic chills and thrills, some hard-hitting lessons, and lovely feels for the Christmas season itself. It's just as easy to see why so many contemporary readers of the twenty-first century keep re-reading it each year too.