'Under the Greenwood Tree' by Thomas Hardy 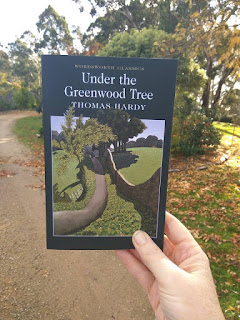 MY THOUGHTS:
This is my choice for the 'Classic with a colour in the title' category of the Back to the Classics challenge 2018. My main experience with Thomas Hardy consists of Tess and Jude, which both made me so upset, you'll never find reviews of them on this blog, because I refuse to re-read them. However, Far From the Madding Crowd wasn't so bad, and I'd heard people call this one more of an optimistic read too. I thought it might be a gentle slide back into Hardy, but on the whole, I was glad it was fairly short, since it didn't impress me much.

It's a simple plot with a complex way of being told, and I think I prefer stories to be the other way around. But I've deplored Hardy so often for his tragic tales, it makes me feel a bit mean for criticising him when he writes a more optimistic one :) However, this tale is so non-eventful, I'd challenge anyone to make it to the end without saying, 'Yeah, well, so what?' at least once.

It's all about the impact the arrival of one young woman has on several men within a town. Fancy Day is very pretty, but the most she ever seems to have on her mind is clothes, flirting, and wondering how she appears to by-standers. We know this for a fact because Hardy sometimes lets us glimpse her mental chatter. She reminds me of Dora from Dickens' David Copperfield, yet she's the school teacher! Am I the only one who thinks that's a bit of a worry?

Anyway, three men fall in love with her. So it's not even a lover's triangle, but more of a weird sort of square. There's Mr Shiner, a farmer and church warden in his thirties and Mr Maybold, the new young vicar. And then there's Dick Dewy, the modest son of the local tranter (delivery man) who's in his early twenties. He's obviously the hero we're meant to barrack for.

At the same time, the story follows the course of the male string choir, a proud and passionate group of musicians who have been playing together for many years. When Fancy arrives, they're told their services are no longer needed, all in the name of progress. The vicar and his warden have decided they'd prefer Fancy to play the organ. The poor chaps are forced to accept this, and decide to go out with dignity. I wondered why they couldn't just alternate the style of music from week to week, but I guess when we compare it to current church music, their modern counterparts also choose to move on, rather than cling to outdated forms for sentimental reasons. It's just a pity to see these men sacked from what they love, while their replacement is indifferent to taking on the job. We ask, 'So, is Hardy going to do anything for them?' The answer turns to be nope, it's just a tough call. Bad luck, guys. And as I say ... why is this story material?

It's a tedious read and not an easy one. The book throws us in the deep end of arcane British country dialect. It's not just in speech, but peppered all through the story, as if the narrator assumes all readers will be locals like himself. We need to keep flicking to the glossary at the back, because so many words aren't intuitive. For instance, a 'drong' is an alley or narrow path between walls and hedges. And a 'dumbledore' is a bumble bee. I'm sure the very impressive J.K. Rowling must have known that one when she started planning Harry Potter, so I'm left with a renewed sense of awe for her extensive knowledge base, if nothing else.

It all seems so ancient to us, yet characters often discuss old-fashioned times, as if they're coming from a completely modern standpoint. It gives a strange sort of feeling that our twenty-first century generation is just scraping the surface of history. It also makes me wonder how precise modern authors of historical fiction ought to be. I'm sure many of us don't know a fraction of the words Hardy spouts in this story. You just had to have been there to pull it off. Yet on the other hand, if you nail it too accurately, nobody will understand you. So perhaps in modern historical novels, it's not authenticity we're after as much as a good story.

The descriptions, always Hardy's strong point, are lovely, with all the cloud, light and chimney smoke. He has some good, humorous dialogue too. But I've got to be honest, my final thought was, 'Tough luck, Dick. I get to escape from Fancy now, but you don't.'