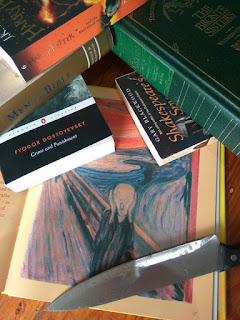 The main thing these characters have in common is that they carefully contemplate committing murder, and plan how it'll take place. There's no flying off the handle and losing it in heated moments for these guys. Most of them carry it through to the letter, although a couple decide not to. But in each case we get insight into all their deliberation and forethought. We seem to lap up the opportunity as readers, because there's one more surprising fact about my selection. Even though these are murderers or wannabes, every guy on this list receives plenty of empathy, admiration and even outright love from fans. I'll rattle them off, and you can try to help me figure out why.

I'll start with the Bible and Shakespeare.

King David
The ruler of Israel plans it all out to cover his own tracks. He'd slept with the wife of a loyal soldier and made her pregnant. The man, Uriah, won't succumb to the enticing offer of a night at home with his wife before a big campaign. So David feels he has no choice but to bump him off. He orders Uriah to be placed at the front of the army in battle, where he'll surely be killed. It was something only a king could arrange, but David's act isn't the discreet manoeuvre he intended. Ironically, what he planned to be secret is known by everyone familiar with the Bible.

Macbeth
The famous Thane of Cawdor can't forget a witches' prophecy that he'll be King of Scotland. He and his wife hatch up a sneaky plot to kill Duncan, the current king, while he visits their castle. Macbeth has many reservations, but caves in to her pressure. Instead of being a trustworthy host, he carries out the plan to intoxicate and frame the guards, and stab Duncan in his sleep. Macbeth learns the hard way that promoting yourself by evil and violence is no way to thrive.

Hamlet
The young prince of Denmark is out for revenge. He suspects that his uncle, King Claudius, murdered his father to become ruler. Hamlet has it straight from the mouth of a spooky figure who claims to be his father's ghost. He puts it to the test by staging a play in which a murder takes place just as the ghost describes, to observe Claudius' reaction. The result is a green light for Hamlet, but his own murder attempts turn pear shaped, starting from the moment he kills the wrong man behind the curtain. It's one of those snowball tragedies in which not many characters are left standing at the end.

The next pair may represent the shortest and longest examples of planning.

Starbuck
The first mate of the Pequod contemplates a moral murder in a flash, when he sees an opportunity set before him. It's common knowledge that Captain Ahab is a maniac who'll probably kill all his crew in a mad attempt to chase the whale Moby Dick. Starbuck notices his sleeping captain's weapon lying unattended, and knows it could be the perfect moment to finish him off and avert disaster. But a lot rolls through his head in those few seconds, including the ethical dilemma of murdering a superior officer, even to save others. Readers are no doubt torn over whether he decided right in the end. (Here's my review of Moby Dick)

Heathcliff
This might be the most patient example of contemplating a murder. When Heathcliff was a boy, his (sort of) adopted brother Hindley treated him horribly. Young Heathcliff vows to get him one day. That day comes after they've both grown up. Driving a grieving widower to drink, then winning all his property in card games, then quietly doing him in, is proof that biding your time pays off. It takes a bit of reading between the lines in this example, but Emily Bronte gives her readers broad hints that this is exactly what happened. (Here's my review of Wuthering Heights)

The final trio are among my favourite examples.

Frankenstein's Monster
The lonesome beast is devastated that even his scientist creator rejects him. He relieves his grief by planning to murder everyone dear to Victor Frankenstein, including his brother and best friend. After Victor refuses to make him a female companion, he scares him with the threat, 'I'll be there on your wedding night.' So while Victor's busy arming himself with all sorts of weapons, the monster silently carries out his scheme, and murders Frankenstein's new wife, Elizabeth, with his favourite method, strangling. In a way, he's proven that he has a more crafty mind than the guy who created him.

The young Slytherin student has a nasty ultimatum from Lord Voldemort. Kill Albus Dumbledore or watch your family die. So Draco drives himself to the verge of illness figuring out how to do it. Voldy doesn't believe he'll succeed, and plans to use Draco's failure to crush the Malfoys. But we readers know not to underestimate Hogwarts school boys, especially desperate ones. After a few failed attempts with a charmed necklace and poisoned bottle, Draco opens a secret passage for the dark side and stands on the astronomy tower with the unarmed headmaster helpless before him. Only then does he realise what Dumbledore knew all along. He's not the sort of person who can commit cold-blooded murder. At the crucial moment, he doesn't have it in him. It's a heartless reader who doesn't feel sorry for Draco all through The Half Blood Prince.

Rodion Raskolnikov
This gloomy Russian Uni student believes he's concocted the perfect moral murder. Alyona, a mean old pawn broker, lives a worthless life in his opinion. If he kills her, then uses her wealth to help the poor, it should cancel out the crime, right? Hmm, the grey areas are pretty black, but we're stuck in Rodion's head while he figures out exactly how he'll do it, by distracting her with a false pledge and smashing her head in with an axe. At first he changes his mind a lot, opting out of the deed several times. But we know he'll go ahead with it eventually, and when he does, all we can do is tag along and witness the gruesome scene as we turn the pages. (My review of Crime and Punishment is here.)

So there we have them. It's a strange collection. (Who would expect to find King David and Frankenstein's monster on the same list?) Why do they get all the love, especially considering a huge chunk of their victims are decent and harmless people? I  personally love some from my list more than others, yet I can understand why each of them has earned himself a bit of a following. Maybe it speaks as much good about us readers as it does about these murderous men. On the whole, we must be a pretty understanding and forgiving bunch, especially when we get a glimpse into what makes a person tick. Perhaps it's to our credit, and the way we're designed for our hearts to reach out to others. (Or do you think it's because several of them are just so dashing or cute.)