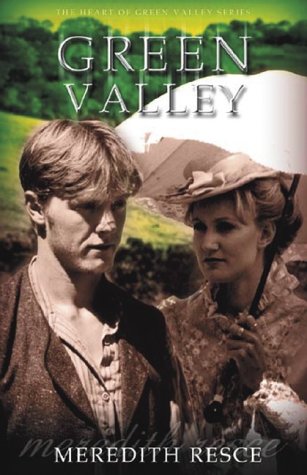 Emily Wallace has been given a choice. Either she obeys her father'swishes and marries the elderly widower, or she will be sent to live with her aunt in Australia. Even with the tales of wild animals and convicts, Emily chooses to sail to this unknown and untamed land. She simply cannot marry the cruel and arrogant Lord.Colin Shore has never met anyone so beautiful before. The moment he first saw Lady Emily Wallace at the dock he fell in love with her. But he would never presume that she would be part of his life. After all, she was a Lady and he was only a farmer.

MY THOUGHTS:
It's the second in the Green Valley series, recently re-released for its twentieth anniversary. Readers of The Manse will remember Colin Shore as the teenager who had to assume full responsibility of his family's farm after his father's untimely death. Now he's all grown up, still working hard, and bickering with his sisters in his downtime. The tiny house is hardly large enough to hold them all, and he can't wait for them to leave home. He longs for the day when they're some other guys' responsibility, and wouldn't dream of courting a girl himself, and adding more drama to the already crammed household.

Meanwhile over in England, Lady Emily Wallace has been resisting the force of her father and brother to marry the foreboding Lord Derickson, who's 60 years old, while she's not yet 17. Her only way to escape their pressure is to cave in to their threats to send her to Australia to live with her aunt Vera, which they never expected she'd choose as the better option. Once there, it doesn't take Lady Emily long to single out the man of her dreams; no prize for guessing who. But she just won't accept it when her new neighbours try to explain that they are at opposite ends of the social spectrum, which makes a union impossible. In her eyes, Colin is a respectable man with land of his own.

There is always a good blend of comedy, adventure and social commentary in the Green Valley stories, which makes them an interesting read. One of my favourite aspects of this one is Emily's spirit. She's a strong, determined character in an era of strict social manners, yet never sacrifices her politeness. There's a great section where she sets out to prove her own worth, but it's the opposite to how many other stories are written. It reminds me of an inverted 'My Fair Lady', which could only work in the Aussie colonial era. Rather than attempting to raise her class, Emily aims to show that she can lower hers, to match the energy and courage of any hard-working farmer's wife.

The confusion of people's roles in this time and place comes through clear. Although British settlers attempt to cling to the social hierarchy which is all they've ever known, they are also coping with unprecedented changes, such as a labourer's freedom to earn enough to purchase land and be independent. In this transition sort of stage, settlers wanted to embrace change and stay put at the same time.

I like it when authors can wrap their minds around a characteristic way of thought from a bygone era, so that it is woven into the plot. With the steady action, combined with colourful descriptions of the Australian bush, it's easy to see why many readers have kept on with this series, wanting to see what'll happen to future generations. In Green Valley, seemingly hopeless situations are worked out quite credibly, to romance lovers' satisfaction.
Posted by Paula Vince at 8:39 AM