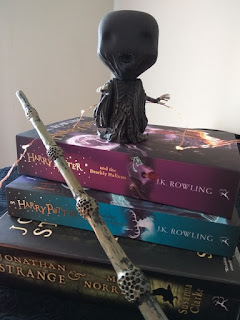 One of the best things about reading novels is occasional sudden insights into issues that might crop up in our own lives. While non-fiction delivers straight talk about how we should tweak our thoughts and behaviour, fiction has a more indirect way of inviting us to make the connections ourselves. Not only is it potentially easier to swallow, but might even stick with us for longer.

For example, fantasy stories often present magical enchantments, and one day it dawned on me how very similar they may be to normal human depression and anxiety. Both grip our minds with half-truths and distortions, and send us spiraling into morbid ruts.

In Jonathan Strange and Mr Norrell, the entire household staff of politician Sir Walter Pole was under a fairy enchantment, and nobody had a clue. There were elusive strains of music and occasional peals of faraway bells. Some of the servants tried to describe their feelings to Stephen Black, the butler, and here's what he managed to piece together. 'The effect of the fairy bells was to bring vividly to mind everyone they'd ever known who had died, all the good things they'd ever lost, and every bad thing which had ever happened to them. Consequently they had become dejected and low, and their lives were not worth living.'

We readers nod along and think, 'It's no wonder they're feeling blue, when their minds are being manipulated like this.' We know just what's going on later, when hero magician Jonathan Strange has a close call himself, almost falling victim to the weird but compelling fairy music. It almost defeated him at the level of his thoughts. Here's how the book expresses it.

'He heard music that described his whole life, and realised for the first time how full of sadness his existence was. He knew now that every angry thought he had ever had was justified, and that every generous thought was misplaced.' Wow, I've had similar moods to that, haven't you?

Luckily, poor Jonathan twigged what was happening in some lucid edge of his mind, and managed to claw himself back to straight thinking in the nick of time. On the spot, he disputed the intrusive thoughts and acknowledged that while they were attacking his mind, he didn't have to own them. Next he replaced them with more wholesome thoughts of his choice, which strengthened with focus. He remembered his wife, Arabella, and her excellent mental qualities that attracted him to her. He loved her ability to find charm and wit in the most commonplace situations, and this sort of healthy thinking turned out to be an effective antidote against the bad fairy charm.

One author who knows all about depression is J.K. Rowling, who has explained how she drew upon her own horrific experience to create the menacing dementors, whose effect on everyone is to create a sick chill and suck every trace of happiness from any by-stander, to the extent of sucking their souls outright with the 'dementor's kiss.'

Harry Potter fans will surely also remember poor Ron's plight in The Deathly Hallows, when he takes his turn to wear the dreadful horcrux locket around his neck. He seems to be particularly susceptible to its influence of despair and hopelessness, to the extent that he bails out of their mission, tells Harry and Hermione where to go and storms off! Of course he comes to his senses the moment he's away from it and manages to return to his friends. But the horcrux fights dirty to the bitter end, taunting Ron with terrible twisted images about his own worth and everyone else's rock bottom opinions of him. It's all noxious garbage, but the scary thing is that Ron knows he was harboring germs of those sad reflections, and the enchantment in the horcrux managed to hone into them and exaggerate them into something malicious and potentially soul-crushing. His simple impulse is to stand around listening, but he must heed Harry's shout to, 'Kill it! Kill it!' These supreme moments are the way a great story can help us slay our own monsters too.

Our books offer hope that we can deal with our personal monsters in the way these great characters deal with their enchantments. Imagine if we could just slay the crazy 'all or nothing' thinking that makes us consider ourselves losers, and the fearful catastrophising, second-guessing, and misfortune telling. What if we could crush those erroneous conclusions that would have us assume that everything we don't like is a personal affront against us, and the distorted negatives which seem to make it all but impossible to acknowledge positives in our lives. I've harboured all of these at different times. It's wonderful to think that good fiction, as well as merely entertaining us, offers a possible way out of bad thinking traps. It challenges us to replace bad thoughts with better ones, and dispute them as if they're just the sort of pesky fairy enchantments that fictional characters must face.

It's not easy, but our beloved stories give us no illusions that it will be. The only effective way to repel dementors and cast a protective Patronus charm is to instantly summon your happiest memories, when you felt on top of the world. Even though you're quaking with terror as the horrible creatures are swooping down on you, and upbeat thoughts seem light years away, if you do manage they'll surely be forced to flee. I love the challenge.

You might also enjoy, Reading with Depression and Melancholia, the happy side of sadness.
Posted by Paula Vince at 8:23 AM