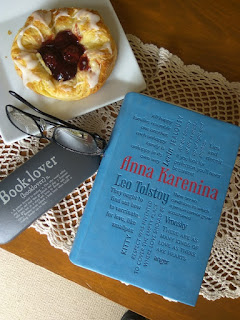 Acclaimed by many as the world's greatest novel, Anna Karenin provides a vast panorama of contemporary life in Russia and of humanity in general. In it Tolstoy uses his intense imaginative insight to create some of the most memorable characters in literature. Anna is a sophisticated woman who abandons her empty existence as the wife of Karenin and turns to Count Vronsky to fulfil her passionate nature - with tragic consequences. Levin is a reflection of Tolstoy himself, often expressing the author's own views and convictions.Throughout, Tolstoy points no moral, merely inviting us not to judge but to watch. As Rosemary Edmonds comments, 'He leaves the shifting patterns of the kaleidoscope to bring home the meaning of the brooding words following the title, 'Vengeance is mine, and I will repay.

MY THOUGHTS:
To start off with, this is my choice for the Book in Translation in the 2018 Back to the Classics Challenge. I'd never read any Russian literature before beginning these challenges, and I'm loving it.

It's taken me well over a month to read and process, but it's been worth every second, and I was sorry it wasn't even longer. It's sad that I let intimidation get the better of me for so many years, but I thought I had good reason. A massive epic about a tragic love affair that drags on for almost 1000 pages didn't sound like much fun. But references to it have popped up so often in other novels, from characters who have loved it. Name dropping and fandom within fiction is always very hard to resist. Then I found out that in 2007, Times magazine deemed it the greatest book ever written. Well, that was it, I felt motivated to at least give it a try.

The first thing you might notice, if you stop to tally them all, is that there's about 230 chapters. Don't let that put you off, because they're all fairly short and easy to power through. It might be a meaty book, but it's not heavy. The characters are all so relatable, and many-faceted, I could easily blow this review into several pages, but thought I'd better focus mostly on Anna this time round. Other characters will definitely get their turn down the track. (Especially Levin, my favourite.)

Anna starts off as the woman who has everything going for her. Great beauty, a friendly manner that bubbles over with merriment and life, a highly respected husband and a sweet 8-year-old son. She also has a knack with small talk that makes whoever she's talking to feel special. When her brother Stepan's marriage seems heading for the rocks, she's the person he calls on to smooth things over with his wife, Dolly.

Then happy Anna meets Count Alexey Vronsky during her visit, and suddenly all she has is no longer enough. Practically overnight, her husband becomes a repulsive bore, and her social life is tedious and false. All she can think about is this gorgeous man who pursues her and fascinates her. (Those people and things haven't really changed at all, of course. It's just her attitude about them.) 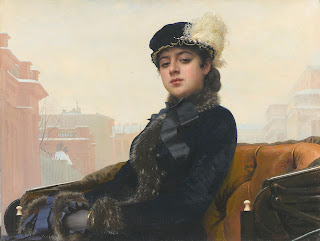 I think there are two main ways readers can approach this novel, depending on how the main character strikes them. 1) Anna is a woman of personal integrity who refuses to live a lie. She realises that life is too short not to make a desperate bid for personal fulfillment and joy. She has the guts to reject the falseness and artificiality pressing her in from all sides, and take a stand for true love, even though she gets shunned by society and branded an immoral woman for doing so. 2) Anna is a selfish rebel who brings trouble upon herself and grief on those closest to her, all because she turns her back on the good in her life, without seeing it as such. Basically, she ditches her husband because someone hotter comes along. She demands freedom and acceptance without considering the claims of those who are made miserable in the process.

Readers on those opposing sides might as well be reading a different novel from each other. Many of us understand both points of view and fall somewhere in the middle. I was interested to see where Tolstoy would take the consequences of Anna's decision to leave her husband and son. To me, his story shows that making an attempt to bulldoze every obstacle in the path of your desires creates its own problems. When trying to design your perfect life involves breaking established 'rules' and upsetting others, all sorts of unforeseen problems pop out.

Anna's admirers might explain her slide into paranoia by blaming society's treatment of her. She'd sacrificed her son and her good name. Vronsky was all she had left, so naturally she was desperate to cling to him. But her critics could argue there's more to it than this. I imagine a hidden fear of some sort of karma or retribution might haunt Anna. Deep down, she can't shake off the sense that she did the dirty on her husband and son, so feelings of guilt and shame keep her edgy and wear her down. Since she's deserted those she should hold most dear, she's more likely to be alert for signs of similar behaviour in others.

Especially Vronsky, who was her partner in crime, so to speak. He left Kitty, his former love, to chase Anna, so what's to stop him from a repeat performance? Anna knows he had no scruples in his pursuit of her, so therefore no matter how well he treats her, she can't shake her concept of him as a person she can't trust. It's easy to understand why his personal history is always at the front of Anna's mind.

There was all sorts of negative psychology going on. Both Anna and Vronsky walk around with the attitude, 'Look at all I've given up for you.' That exerts a sort of 'You owe me,' pressure which isn't the best glue for a relationship. I wasn't a Vronsky fan at the start, for breezing in to wreck a family, just because he fell for a married woman. He regards Karenin, her husband, as a pig or dog sullying up the waters he wanted to enjoy himself! Well, who'd have guessed that getting exactly what he wanted would turn back to bite him on the butt? By the end, I even felt sorry for him.

Anna's predicament makes her impossible to please, as her dealings with her husband proves. When Karenin lashes out at her, she loathes him. Yet when he has a change of heart and chooses forgiveness, she hates him still, for showing her up! The poor guy can't win. When he finally asks, 'Look, what do you want from me?' she finds it impossible to answer. She wants both Vronsky and her son, Seryozha, yet they're mutually exclusive, because for Seryozha to live with his mother and Vronsky would ruin his future social and career prospects. So no wonder Anna's frustration helps change her personality. But it's for the reader to decide to what extent she's responsible for it.

Although I've padded this review out with talk of Anna and Vronsky, their shenanigans alone wouldn't have held me for 900+ pages. Other characters are really the ones who kept me hooked, especially Levin, Kitty, and Dolly who I'll discuss in more detail in other blog posts. (See A Great Pair of Sisters featuring Dolly and Kitty.) 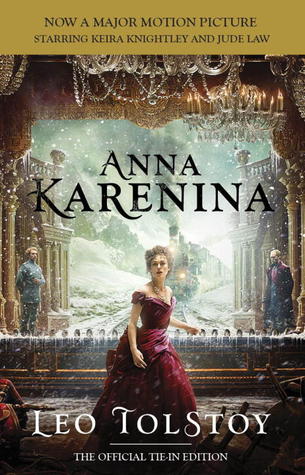 But just as a teaser, Kitty is the girl who fancied herself in love with Vronsky, and refused a heartfelt marriage proposal from Levin. Then when Vronsky jilts her to chase Anna, Kitty realises that she loved Levin all along. She considers her life in ruins, because she'd told him, 'It can never be.' And he's a humble, self-effacing fellow who'd laid everything on the line to propose to her. Now he's retreated back to his home in the country, to handle his rejection with grace and peace. I kept turning the pages for more of the terrific chemistry from these two, whether they're together or apart. (See here for Levin, my super Russian hero)

Perhaps a good quote to end with is Vronsky's, 'I can give up anything for Anna, but not my manly independence.' Little does he know that Anna will demand this along with everything else. I see why this book is loved by many people, from highbrow, literary types all the way down to normal folk like me. There's lots of reflection about politics, economics and philosophy, and different readers may take it all on board differently, but there's more than enough for us all to mull over in our own particular way.

On the whole, I get the strong impression that Leo Tolstoy really wasn't in favour of people leaving their spouse when someone hotter comes along. Yet at the same time, his sympathy for Anna and lack of condemnation shines through. I've heard several suggestions that Anna Karenina is the sort of novel that may help reveal the meaning of life. If that's true, I wouldn't be surprised if there are as many interpretations as there are readers. But I'm happy to go with Levin's conclusion, that overthinking it only brings misery, and we're probably wisest when we do our simple daily tasks with the knowledge that we'll never fathom the heart of God, who makes everything tick.