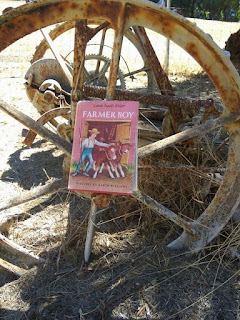 This year, I'm hosting a read-along of all of the Little House on the Prairie Books by Laura Ingalls Wilder, which you'll find here. We'd love you to read along and share your thoughts, if you feel so inclined. I haven't included a sign-up sheet of any sort, but kept it all very informal. Here we're up to the month of March.

Growing up on his family's farm in New York, Almanzo Wilder wishes for just one thing--his very own horse. But Father doesn't yet trust him with such a big responsibility. Almanzo needs to prove himself--but how?

MY THOUGHTS:
It's the story of Laura Ingalls Wilder's husband Almanzo when he was a boy. To sum up my feelings in a sentence, nothing beats sitting down to relax with a good book and read about others' hard work. I'd guess it was originally written as a companion to Laura's first book, Little House in the Big Woods, because it covers a year in the life of a family, following the cycles of the four seasons. But unlike the restless, roving Pa Ingalls, the Wilders had a flourishing, commercial farm. They weren't moving anywhere, and wouldn't want to!

One thing that stands out about James Wilder's farm is the huge variety. No specialisation for this man, he had all sorts going. Horses, cattle, sheep, potatoes, other veggies, cereal crops, orchards, you name it. I'm sure farms like his are almost extinct now. In modern times, people are seduced by the greater efficiency of growing or raising just one thing, and the profits that follow. Indeed, smaller hobby farmers can't compete with the produce of mass producers on the market. But I wonder if there's a high cost of soil depletion and healthy nutrient loss from overdoing it with a single commodity. It's sad to think that we're being led by the almighty dollar to our detriment, and that farms like the Wilders' no longer operate.

What pros they were too. Everything from their farm was naturally the very best. Not just any old sheep, but prize merinos. Also high pedigree Morgan horses, top quality potatoes, and super creamy butter that speaks for itself. No wonder the Wilders were highly respected in their community, and naturally reserved the best stables at church.

Almanzo makes a likable little hero, and his love for horses and food cannot be beaten. The story shows this boy going crazy about either one or the other.

To me, the horses come across fairly edgy and keyed up. Father wouldn't let his nine-year-old son near them, for fear that he'd teach them undesirable habits unwittingly. He was always dropping remarks like, 'One little mistake will ruin a fine colt.' They sound a bit like children. They'll pick up bad habits in a flash from some ratbag who's just mucking around, while good traits from someone with their best interests at heart are harder to stick. But young Almanzo decides that these high-maintenance critters are his delight. 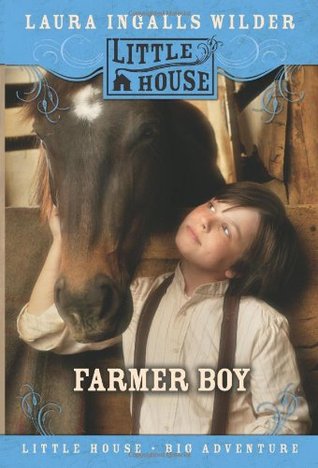 His other passion is food, and the amount he manages to stuff into his mouth during this story is astounding, but Mother keeps it coming. A typical winter breakfast, for example, seemed to be pancakes, sausage cakes, oatmeal, fried potato, buckwheat cakes, doughnuts, jellies and jam. They have my admiration for keeping up the pace day after day, when our morning ritual is pouring a bowl of cereal. Reading this book might even be a good strike in the war against junk food. If you start off feeling sorry for the Wilder kids for not having Mars Bars and McDonalds, you might well end up feeling jealous instead, because of the delicious turnovers and doughnuts we can read about but not taste.

It's a lovely picture of a boy with a healthy role model in his father, who he adores. James gives Almanzo a heavy dose of the Protestant Work Ethic, making sure his son knows that money = hard work. 'Any time you want to spend a nickel, stop and think how much work it takes to earn a dollar.' He also scoffs at time saving devices which may compromise quality, because 'all it saves is time. And what good is time with nothing to do?' It sinks in too. One the third day of the County Fair, the young boy decides with no prompting that he's had an overload of leisure and just wants to get back to work.

There are several interesting snippets. How about the Indian at the County Fair, who jumped onto the race track and kept up with the horses? The story tells us that he ran a two minute, forty second mile, and even Father was impressed. Well, I'd hope so, because if it's true, the guy smashed Sir Roger Bannister's four minute mile several decades before it was even set! Even in 1954, many people called a four minute mile a physically impossible feat. And today the current record stands at three minutes and 43 seconds.This shows that nameless wonders and unsung heroes pop up in every generation. Unless Almanzo remembered it with boyish exaggeration and told Laura, who took it on face value and wrote it down. But I prefer to believe the tale about that freakishly fast Indian runner. (Even though my family say it's absolutely impossible.)

Readers who work in the retail industry should get ready to be challenged. Almanzo's big brother Royal decides to be a store keeper, because he's over all the demands of farm work. It makes sense to me. He's a young man who's familiar with farming and knows what he's talking about, so it's not an uninformed whim on his part. Yet his parents think he's selling himself short, and their main reason for idolising their hard lifestyle comes back to their notion of freedom and independence.

They can't stand the thought of having to kowtow to customers and keep everyone happy, whether they like them or not. We're told, 'If Father goes out of his way to please anyone, it's only because he wants to.' He himself puts it this way. 'You work hard but you work as you please, and no man can tell you to go or come.' (Only the weather, the seasons, the hands of the clock and the demands of a crowd of animals are allowed to do that, but somehow James Wilder doesn't mind being pushed around by these things so much. But to me it shows that nobody is truly 'free', unless it's to choose who, or what will be our master.)

Mother knows exactly how to respond to Mr Paddock's generous offer to train Almanzo to be a wheelwright. 'Why would Almanzo want to live in town and cater to the whims of every Tom, Dick and Harry?' Poor Mr Paddock will have to look for another apprentice.

'Mother' is one of my favourite characters. The story doesn't even give her name, but a wiki search tells me it was Angeline. What a fantastic lady, proving that feminine skills are a super strength. She blitzes everything, from her wonderful cooking and awesome loom weaving to her way of speaking her mind and bartering with tradesmen. I love how she and her husband come across as partners, each upholding their own equally important end of home and farm. But most of all, I love how she liberates other females not to scoff at the domestic arts, as a life pursuit. Nobody could possibly look at Angeline Wilder and call her work drudgery. What a woman.

Another theme that keeps popping up is the true value of anyone's work or decisions being revealed in time. When lazy farmers scatter seed haphazardly so they can call it a day, their sloppiness will be obvious to everyone a few months later. In one of my favourite chapters, Almanzo decides to sneak some homemade toffee to his pet piglet, Lucy, but everyone finds out when her teeth get stuck together, and they have to pin her down so Royal can dislodge it. Oh oh, even loyal sister Alice is shocked that Almanzo would waste their sweets on a pig.

On the whole, Father is very matter-of-fact about the test of time, even regarding those he's most proud of.
Liveryman: That's a smart boy of yours.
Father: Time will show. Many a good beginning makes a bad ending. It remains to be seen how he turns out in the long run.

History showed his son suffered many tough times and hard knocks in the years ahead of him, with moments of heartache that might have broken his father's heart to see. But Almanzo came through with his faith, and his good, gentle character intact, so I'm sure James would have been perfectly satisfied with the way he turned out.

Next up will be On the Banks of Plum Creek

Read more about Almanzo here on this post about book boyfriends
Posted by Paula Vince at 8:50 AM