'All Passion Spent' by Vita Sackville-West 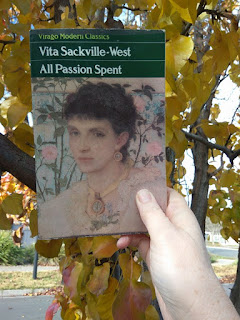 In 1860, as a young girl of 17, Lady Slane nurtures a secret, burning ambition—to become an artist. She becomes, instead, the wife of a great statesman and the mother of six children. Seventy years later, released by widowhood, and to the dismay of her pompous children, she abandons the family home for a tiny house in Hampstead. Here she recollects the dreams of youth, and revels in her newfound freedom with her odd assortment of companions: Genoux, her French maid; Mr. Bucktrout, her house agent; and a coffin maker who pictures people dead in order to reveal their true characters. And then there's Mr. FitzGeorge, an eccentric millionaire who met and loved her in India when she was young and very lovely. It is here in this world of her own that she finds a passion that comes only with the freedom to choose, and it is this, her greatest gift, that she passes on to the only one who can understand its value.

First published in 1931, Vita Sackville-West's masterpiece is the fictional companion to her great friend Virginia Woolf's A Room of One's Own.

MY THOUGHTS:
This is a thought-provoking story for anyone who wants to give themselves permission to live a simple, humble, contemplative life. Platitudes such as 'step out of your comfort zone' are so prevalent, we tend to take them on board as dogma without ever thinking about them. This story is all about asking, 'Hey, why should I step out?' Lady Slane is one person who realises that since life is so short, her comfort zone is the most appealing place to live. Her given name is Deborah, but nobody has used it for years. After a lifetime of doing what society expects of her, she makes a decision to retire from the public eye and live in a small house, out of the spotlight.

At the start, her husband, Henry Lyulph Holland, the first earl of Slane, has just passed away, aged 94. He was a former Prime Minister and Viceroy of India with an illustrious list of achievements and excellent reputation. Now that he's gone, his older children, senior citizens and big advocates of productive lives, assume that their gentle and pliable mother will be passed around between their homes. But the 88-year-old has other ideas.

Lady Slane realises that in all the hustle and bustle of helping her family look good, she's sacrificed many parts of her own true nature, including time to contemplate. 'In contemplation she could pierce to a happier life more truly than her children, who reckoned things by results and activities.' She and her maid,Genoux, realise their calm, new routine is more than enough, punctuated by small interests such as leisurely strolls and the arrival of tradesmen and parcels of books. 'Of such small things was her life now made.' It sounds pretty nice to me, and I kept scribbling down supportive quotes of her chosen lifestyle. 'She'd had enough in her life, of people whose worldly status was their passport to admission.'

I didn't give the nod to everything. Some of her musings made me a bit sad, such as thinking back on her husband and children as 'obstacles' that kept her from her true self. That's a hard word to use in this context, for innocent kids. She was the one who caved in to pressure to bring them up in a way the world would approve, but then decides she doesn't gel with the hoop-jumping people they grew into. Well, she helped shape them that way. I can't help feeling that when they grew up, she was treating them the same way they treated her, by thinking harsh things about them and not extending grace, since they were acting the best way they knew how, just like her. And sometimes when she made decisions just to annoy them, I wondered if she was such a nice, innocent little old lady after all.

Most readers would probably agree that the renewal of Lady Slane's friendship with Colonel FitzGeorge is one of the book's highlights, even though she barely remembered their mutual past to start with. Two people who briefly cross paths in their twenties now touch base almost sixty years later, and take up where they left off. I love how he reflects that the beauty in her face has changed, developing into something richer and deeper than youthful beauty.

In fact all the characters are elderly, with one notable exception towards the end. Some of Lady Slane's children are grandparents themselves, and Edith, the 'baby sister' is 60. She's an interesting character with an independent thought life I would have liked to see more of. Mr Bucktrout, Lady Slane's old landlord, is also quite a character on her own wavelength, and some of his quotes are the ones I liked most.

* Repose is one of the most important things, and yet how few people achieve it.
* My principle has always been that it's better to please one person a great deal than please a number of persons a little.
* I have given a great deal of offense in my life, but not one offensive instance do I repent.
* Although one cannot create an atmosphere, one can at least safeguard it against disturbances.

Maybe sticking to our decisions to live the gentle, quiet lives we dream of, instead of jumping through hoops, is really a bold leap out of the comfort zone of public approval. Insisting on your right to enjoy a passive, relaxed and unheralded life may take courage, in the face of criticism and rejection. What an irony that going with the flow, and taking the path of least resistance, may be the biggest energy sapper after all. I'm not going to wait until I'm old to heed Lady Slane's lesson.