Should Classics be adapted for Young Readers? 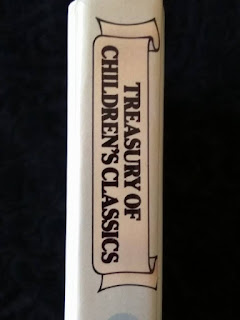 The question is this week's topic from Pages Unbound, in their Classic Remarks meme. I'd never considered it much before, but I can see some wisdom in adapting classics. Some people might prefer to enjoy the stories of Geoffrey Chaucer or William Shakespeare without getting bogged down in ancient Chaucerian or Shakespearean English. We no longer live in Medieval or Elizabethan times, yet their tales are certainly entertaining enough to be retold in language twenty-first century readers can understand. When you look at it this way, it's not all that different from translating stories from foreign languages.

A friend of mine remarked on the difference between abridged and adapted classics. In the first case, the book is simply shortened, and in the second, the story could be changed to the extent that it takes place in a different time or place which is easier for the reader to relate to, although the plots points are still adhered to (sometimes loosely).

Yet it all involves making amendments to what the author originally planned, and I have reservations in endorsing either abridged versions or adaptations at all times, just to make the reading experience easier. Before saying, 'Yeah, anyone should just go for it,' I'd want to be sure the following conditions are considered. Here are five times when maybe classics shouldn't be altered to suit young people.

1) Not at the expense of not having the original volume available at all.
Journalist Rebecca Mead was researching the life of George Eliot, who wrote her favourite classic, Middlemarch. During a visit to the book stores of Coventry, where Eliot spent a great part of her life, Mead could not find a single, unabridged copy of Middlemarch in the whole city! There were several different shortened versions, but not the masterpiece Eliot wrote. Rebecca Mead sadly guessed that in our fast-moving modern times, readers simply won't sit down to a book the size of Middlemarch. Shops don't supply it, because there's no market for it.

Since Middlemarch is sometimes considered the greatest British novel of all times, I think it a shame that twenty-first century readers just can't be bothered with it. Sure, let's offer abridged versions, but don't take opportunities away from anyone who wants to get exactly what the author intended, no more, no less.

That anecdote, and many others, are in this book which I reviewed here.

2) Not if you don't make it clear that this is what you're doing.
Perhaps I should've been more alert after the first couple of times this happened to me, but I've sometimes finished reading a classic from cover to cover and thought, 'I didn't realise it would be this simple and short.' Only then do I notice some fine print in an obscure corner of a front or back page, saying, 'This is an abridged version, adapted by So-and-So.' That's incredibly annoying, when I pick up a book in good faith expecting the complete, original story. Publishers, if you're going to do this, please make it clear with decent sized print in a noticeable place that this is a shortened or adapted version.

3) Not if someone goes too wild with the pruning shears.
I sometimes wonder whether adaptors get too heavy-handed and cull parts which the author might have considered most meaningful. Since the stories have been around for long enough to be considered classics, in many cases the writers have passed away, and we can no longer run questions past them. But you'd expect that anything in the original was put there for a good reason. Trimming bits away, or changing them, to provide a shorter, easier read should be a delicate operation. Editing lengthy descriptions or excessive background dumps is one thing, but at times I've asked young readers, 'What did you think of the part where the main character did such-and-such?' and they reply, 'He didn't do that in my version. Wow, that's wild!' Or, 'In the book I had, they wrote it this way instead.' I've come across too many adaptors who behave more like wrecking balls than precision surgeons. These people should be kept well away from great old stories.

4) Not if they're really not designed to be read by a younger audience.
Maybe some classics are just not the sorts of material children need to be getting their heads around. I'm not saying this in a condescending way at all, since I believe kids' minds are as retentive and intelligent as adults'. It's just that there's a stage of life when innocence and simplicity should be treasured, and minds needn't be bogged down with themes like cruelty, misogyny, horror, terrorism and the like. These will certainly be brought to their attention down the track, so we don't necessarily need to rush the process by introducing certain books in ways younger folk can easier grasp, just because they're classics.

5) Not if readers are likely to say, 'Now I know the story, I don't need to read the longer version.'
Publishers may have good intentions of offering these changed versions to whet young readers' appetites for the real thing, but there's no plot spoiler quite like an abridged story. I hate this sort of comment as much as I hate hearing, 'Now that I've seen the movie, I don't need to read the book.' No, no, no, you think you can discuss all the features of this book, but you've no idea! You haven't necessarily experienced the beauty of the original author's prose, or delved into the characters' psyches, or seen the extra atmosphere the setting may add. The sad thing is, you truly think you have.

So even though I can see the benefits of abridged or adapted classics sometimes, and I'm not totally opposed to them, I think I've just convinced myself that in many cases, I'm not really a great fan. Maybe that's why we don't have all that many on our bookshelves, and also why I haven't encouraged my kids to read abridged classics. In general, when I love a classic, I tend to wait until I consider the kids old enough to get the most out of the original versions, and then recommend them with all my might.