'Around the World in Eighty Days' by Jules Verne 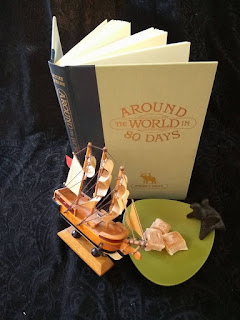 "To go around the world...in such a short time and with the means of transport currently available, was not only impossible, it was madness"One ill-fated evening at the Reform Club, Phileas Fogg rashly bets his companions £20,000 that he can travel around the entire globe in just eighty days - and he is determined not to lose. Breaking the well-establised routine of his daily life, the reserved Englishman immediately sets off for Dover, accompanied by his hot-blooded French manservant Passepartout. Travelling by train, steamship, sailing boat, sledge and even elephant, they must overcome storms, kidnappings, natural disasters, Sioux attacks and the dogged Inspector Fix of Scotland Yard - who believes that Fogg has robbed the Bank of England - to win the extraordinary wager. Around the World in Eighty Days gripped audiences on its publication and remains hugely popular, combining exploration, adventure and a thrilling race against time.

I'm so glad I've got this classic off my TBR list at last. It's my choice in the 2017 Back to the Classics challenge for a book with a number in the title.

The year is 1872, and the mathematically minded Phileas Fogg is indignant when his friends laugh off his claim that a man can circumnavigate the globe in just 80 days. They offer him £20 000 to prove them wrong, and he accepts the wager, deciding to set off that very night. His new man-servant, Passepartout, is astounded when Fogg arrives home and tells him to pack their bags within ten minutes.

I would have sided with the majority, who believed there was no way Fogg could plan a trip which had to account for every minute, when so much could potentially go wrong. And for these travellers, that turns out to be more than just inclement weather and transport hold-ups (although they have their share of those). They are being trailed by stubborn Detective Fix, who is living under the delusion that Fogg robbed the Bank of England. They also pause to save the life of a young Indian woman, Auoda, who's about to become a human sacrifice. That's just the start of their escapades.

My main issue is that I just couldn't warm to the main man, although I admired aspects of his personality. There's too much Dr Sheldon Cooper in Fogg. Not only are such characters set in their ways, but so full of themselves they insist on forcing their crazy standards on others. At times I try to demand that my kids tidy their bedrooms, but at least that's achievable for mere mortals.

Fogg is overly-inscrutable too. I think Jules Verne intended to keep an aura of mystery about him, because he never shared a glimpse from Fogg's point of view, even though he's supposed to be the hero. We only see him through the impressions of others, such as Passepartout, Fix and Auoda. All we get is his cool, unflappable exterior. And we never have a clue where his vast wealth comes from. He flaps bank note bribes under the noses of people all through the story, but is it earned through work, a family inheritance, or something else?

It's hard to muster much sympathy for a main character we only know from the outside and not the inside. Maybe his surname, 'Fogg' is chosen on purpose, because the connotations are very apt. I watched two movies based on this book, and didn't mind Phileas Fogg as he was portrayed by David Niven in 1956 and Steve Koogan in 2004. But the book Fogg leaves me cold.

What annoys me most though, is that he's too disdainful to do a little sightseeing. He's so set on mechanically carrying out his challenge, he can't even be bothered looking out the window. What sort of boring waste of oxygen gets to see the wonders of the world firsthand, but chooses to draw the blinds and play whist? Verne makes it clear that Phileas Fogg is 'not travelling, but only describing a circumference.' He also points out that he's 'one of those Englishmen who are wont to see foreign countries through the eyes of their domestics.' Give me the train and boat tickets instead, please :)

Sir Francis Cromarty, a passing character, questioned himself as to 'whether a human heart really beat beneath Fogg's cold exterior, and whether he had any sense of the beauties of nature.' I'd answer no to both. 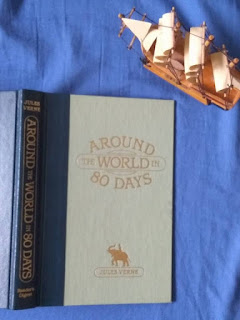 Passepartout is the more likeable character, even though we don't get much of his background either. But he's intrigued by the sights he sees, he's volatile and good natured, and can't help showing his enthusiasm. He's loyal and principled too, refusing to turn on his master, even when he wonders for a while if Fix is right. I wonder whether Passepartout was Verne's favourite character too, because he shared his nationality. It seems like such a British book, beginning as it does with Fogg and his Reform Club cronies in London, so comes as a bit of a shock whenever we remember that Jules Verne was actually a Frenchman.

The descriptions of the different places, which we see mainly from Passepartout's lively point of view, are great. Verne even pokes a bit of fun at the different nationalities through his pointed observations. I wonder how a modern author might handle a similar story, in our politically correct era. Jules Verne might have considered his story an up-to-date tourist guide, but for us, it's a charming old vintage relic from Victorian times. The Afterword in my volume points out that Fogg was a symbol of the scientific optimism that was rife through Europe and America in the second part of the nineteenth century, and I believe that's what provides the good steampunk feeling I enjoyed.

It's fun to read about the food. Phileas Fogg found that the 'native rabbit' he was served in Bombay was far from palatable, but when he tried to pin down the waiters to find out exactly what it was, they eluded direct questions. 'Rabbit from the jungle' was the best he could get out of them. Fogg's normal breakfast in England didn't sound half bad. 'Broiled fish with Reading sauce, a scarlet slice of roast beef garnished with mushroom, rhubarb and gooseberry tart and a morsel of Cheshire cheese.'

I was keeping an eye on all of Fogg's outlay, as he often had to spend big money to get places in the nick of time. It's pretty clear early on that by the time he arrives home, he'll have spent so much money that winning the wager would barely cover costs. However, there is also a good twist or two. It's worth a read, just because it's so famous, and for the sake of Passepartout. But as for Phileas Fogg, I think the man who wrote the Afterword in my book summed it up best. He wrote, 'If it is true that Jules Verne never saw most of the places he described but only imagined them, then it's entirely appropriate that Verne's hero does not see them either.' 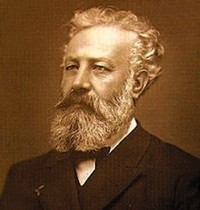 Passepartout: Alas! In my hurry, I, I forgot...
Fogg: What?
Passepartout: To turn off the gas in my room.
Fogg: Very well, young man. It will burn at your expense.

Detective Fix: Great robbers always resemble honest folks. Fellows who have rascally faces have only one recourse to take, and that's to remain honest. Otherwise they'd be arrested off hand.

Sir Francis: (surprised) Why, you are a man of heart.
Fogg: Sometimes, when I have the time.

A great smoker can smoke as many as eight pipes a day; but he dies in five years. (In the opium den in Hong Kong.)

It may be taken for granted that, rash as the Americans usually are, when they are prudent, there is good reason for it. (When they're wondering how to cross a rickety old railway bridge.)

Fix: Good, India! We own that! (At one stage when he discovers their whereabouts.)