Can sworn enemies ever become friends? 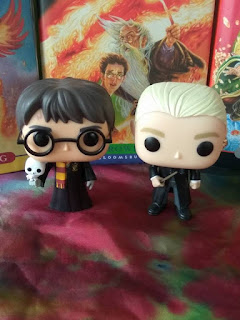 Whether or not you love or hate 'Harry Potter and the Cursed Child', one of my favourite lines is 'Draco looks at Harry and for the first time - at the bottom of this dreadful pit - they look at each other as friends.'

Becoming friends is a natural progression for these two former enemies, since saving their sons' lives depends on their teamwork. But will it last? Some people say there's too much bad history between them to ever bury the hatchet. Others believe it's an unlikely prospect because they don't have enough in common to ever be friends. I couldn't disagree more. These two are incredibly alike in so many ways, which may be part of the reason for their bad start. I'd love to see them cement the tentative friendship they started to form in Cursed Child. I imagine this list would give them enough common ground to talk about for years.

1) Voldemort wanted them both dead.
For Harry, his reasons were obvious, and their history went way back. Lord Voldemort was certain that Harry Potter was the baby of Sybil Trelawney's prophecy, and after killing both parents, he intended to take care of the infant threat with one quick 'Avada Kedavra.' That's when all his personal problems started, as the spell backfired on him, leaving Harry with nothing but a lightning shaped scar on his forehead. With Draco, Voldemort planned to give him a suicide mission to teach his father, Lucius, a strong lesson for stuffing up. So he set Draco a task he shouldn't have survived, and certainly wouldn't have without some intervention from other sources.

2) Dumbledore and Snape saved both their necks. 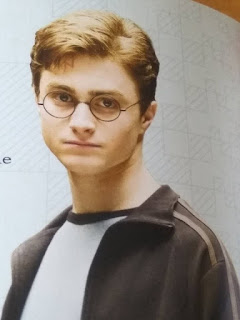 Dumbledore was always looking out for Harry, and his words and actions on the astronomy tower just before his own death prove that he was looking out for Draco too. Convinced that there was still good in the Malfoy boy, the old headmaster didn't want to damage his soul by allowing him to commit murder. Snape saved both boys too (for more details, I wrote a whole post about Snape's actions.)

3) Both probably suffered undiagnosed Post Traumatic Stress Disorder and Survivor's Guilt.
I'm not sure St Mungo's Hospital would have included psychologists on their staff list, but it stands to reason these two bore emotional scars. Harry was restless, afraid of small spaces, and found it hard to relax. He also declared that he felt guilty for being alive since so many good folk had died for the cause which he headed. And Draco had his world turned upside down, as his family went from being admired as aristocratic purebloods to being shunned for being on the wrong side, along with all the cruel things he was forced to witness and take part in as a teenager. All of this was partly what caused him to draw his little family out of the spotlight, which led to problems of its own.

Harry: Love blinds. We have both tried to give our sons not what they needed, but what we needed. We've been so busy trying to rewrite our own pasts, we've blighted their present.

4) They saved each others' necks.
During their capture in Malfoy Manor, Draco bought the golden trio a little time by his spur of the moment decision not to identify them. Then Harry later rescued him from the burning Room of Requirement, risking his own life in the process. I like the domino effect of this sort of thing. In the next generation, Draco's son Scorpius helps save his best friend, Harry's son Albus, who puts himself at risk of never being born after meddling around with a time turner. This history alone should be enough to form a bond between the Potters and Malfoys.
(For more on this theme, you might enjoy my post, Bad Boys with Depth.)

5) They were always fairly evenly balanced in skill levels.
This just added to the tension of their antagonism. One might surpass the other in some area, but it evened out overall. Reading between the lines, I get the feeling Harry may have been superior with Quidditch talent, flying and Defence against the Dark Arts, but Draco probably had the upper hand with Potions, general academic proficiency and Occlumency. And as an adult, he dabbles in Alchemy just for fun. Both were very talented young wizards in their own ways.

6) Both experienced disillusionment with their fathers. 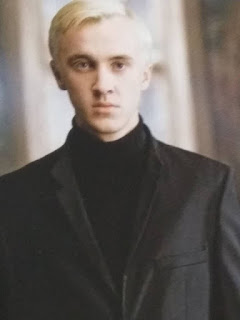 The rosy picture Harry had formed of his father, James, is slightly shattered when he discovers the horrible way he bullied Snape during their youth. And Draco's hero worship and illusions about his father, Lucius, all come crashing down when dramatic circumstances reveal him to be a weak, misguided bigot who was always on the wrong side. In fact, we're told Draco's grief continued when Lucius opposed his marriage to the girl he loved, and the way they chose to bring up their son. Both had adults who let them down.

7) Both were united in wanting their sons to be happy.
Their sons' close bond is the catalyst that forced these two in close proximity, and helped them to regard each other as friends too. In fact, it's quite moving to see Draco gradually let down his guard and become vulnerable with Harry, admitting, 'It's very lonely to be Draco Malfoy.' And I don't believe they could have stood there, witnessing the deaths of James and Lily first hand, then gone back to life as usual. Also see Is Harry Potter a Bad Dad?

Surely the friendship has got to continue. To those who say it's unbelievable, I'd say that time changes many things, and may even soften the hardest attitudes. And if you think their mutual regard was too easily won, don't forget that Cursed Child takes place when they're in their early forties. These two have been skirting around each other, just on nodding terms, for about twenty-five years. One thing I loved about Cursed Child was seeing them on the same side, at last! Given all that I mentioned above, a good friendship between them may be well overdue.