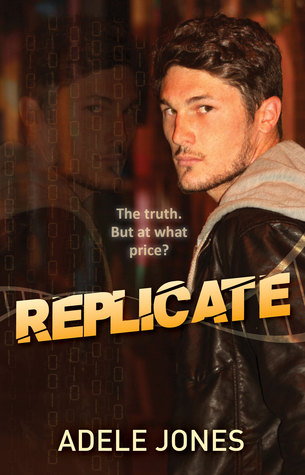 Having read and reviewed Integrate the first book in this trilogy, it was great to get hold of Replicate. After the first book release, I even had an interview with Blaine Colton, the hero and teenage survivor of mitochondrial disease here.

Blaine Colton is pulled into a chilling conspiracy when he discovers embryonic clones with his name on them.
Suspecting the research has breached ethics agreements, he brings close friends, Sophie and Jett Faraday, in on a scheme to find answers. Immediate threats reveal not everyone is happy about his discovery. The reappearance of an identity from Blaine’s past unsettles him further, and then a crisis fractures his world. Convinced his research objections and the tragic events are linked, Blaine pursues justice. But someone is watching him. Someone wants him dead.
Replicate continues the story of Blaine from Adele Jones' Integrate.

MY THOUGHTS:
What an ethical can of worms the premise of this story opens. Living human flesh is being harvested for experiments, but even if the ultimate intention is to benefit humanity, does that make it okay? It all comes back to the question of whether one being should be sacrificed for the greater good. In this situation, the even deeper question is whether living entities should be created especially for the purpose of being sacrificed.

For the most part, we experience the story through Blaine's bewildered point of view. He has no idea what exactly is going on within the walls of the medical centre, but once again, it deeply affects his life. It's a medical drama, it's a crime drama, and the lines blur into each other. We know that Blaine, his parents and the Faraday family are totally trustworthy, but as for all the other characters, well they could be anyone's guess!

It might have been good to see Blaine argue the ethical issues with even more fervour. Why was the cloning such a reprehensible deed in his opinion? Taking his stand made the stakes so high and impacted his life so adversely, yet his main objections seemed to be along the lines of, 'That's my genetic material, they didn't ask my permission, and it's illegal.' Several readers might be in favour of cloning for possible far-reaching medical benefits. Would the strength of his argument be enough to convince them that he was right? I guess it depends on each individual reader.

Overall, it's a real nail-biting, fast-moving thriller, with several twists and shock revelations that are impossible to foresee. At one stage I was telling my husband, who'd read the book before me, 'You should have warned me.' With this sort of action to follow, I'm sure whatever happens in the final book, 'Activate' will be bound to astonish and take us off guard.