'Next of Kin' by Carol Preston 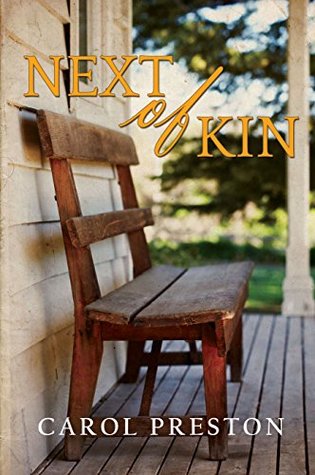 Fanny Franks was raised to believe in honesty, equality and acceptance, regardless of background or circumstances. When she meets brothers Jack and Jim, she is drawn to them by the alienation and injustice which seems to pervade their lives. She is determined to intervene and help them find happiness, until trauma in her own life brings discrimination and shame for which she is ill prepared. In dealing with her own struggle she comes to understand what Jack and Jim are going through, and they find where they truly belong.

MY THOUGHTS
Fanny Franks works as a kitchen hand at a hotel. She finds herself drawn to Jim and Jack Schmidt, the nephews of her German employers, because they've had a very hard upbringing.

One of the main themes is that discrimination and intolerance for people in minority groups flourishes naturally. What makes this an interesting read is that it isn't obvious the main character needs to learn this for herself. Fanny already considers herself to be an unprejudiced person who is quick to jump to the defense of underdogs. But before the events in this story take place, she's never been on the receiving end of the same treatment. She comes to understand that even though she thought she wasn't judging Jack for his approach to his own problems, in some ways she really was. It's easy to think you understand a person's situation and can dictate what their attitude ought to be, but there is nothing like unexpectedly facing what they've faced to help put things in perspective.

I got the feeling early on that Fanny would end up with Jack, but I think the clues were there because we were meant to twig. It was his Mr-Darcy-esque gruffness, which suits colonial Australia, and the way she always notices his stormy looking eyes, even though she thinks him a grouch. There's plenty of time in the story when Fanny and the boys are separate from each other, but since it's far more than just a love story, this is fine.

It takes a good story to highlight the tension between two equally rigid attitudes in such a way that we can understand both. On the one hand, there's the German migrants who want to cling to the features of their homeland. Then there's the locals who believe they need to adapt to their new country.  Carol Preston's books can always stand alone, yet when you read several of them, the characters can be linked back to others, until there's a long line of several generations in a family to follow.