'Career Advice for the Lost Soul' by Rebecca Hayman 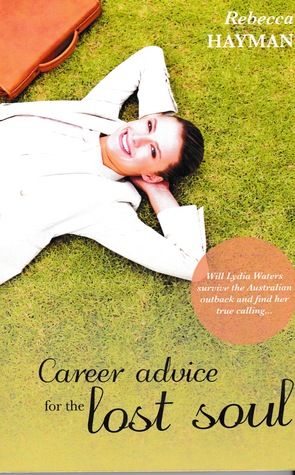 Genre: Christian contempory fiction, Australian fiction.
Pastor Lydia Waters has a career plan. It is straight-forward, logical and more than likely to succeed. That is until she is stymied by her boss, the slightly sinister, can’t-quite-put-my-finger-on-it-but-I-wish-he’d-stop- smiling-at-me-like-that— Reverend Gordon Bates.
Lydia flounders and she doesn’t have a plan for floundering. Loss of a job she can handle, but loss of belief in the job she is qualified to do? What does it mean to pastor a church anyway?
In the lull answers come unexpectedly. Sid and Viv Vincent, with their awkward kindness, reinstate church as that place where you get a cuppa and a biscuit afterwards (sometimes even cake). Her mother Phyllis Waters leads Lydia into the wide expanse of Australia’s interior, where Luke’s Gospel demands of her an exploration of self. Then there is Malcolm Preston who can’t be dismissed quite as easily as she first thought.

MY THOUGHTS:
At first I expected this to be a bit like one of those lighthearted church chronicles with amusing anecdotes. Think the Vicar of Dibley. It didn't take long to realise this novel was going to delve far deeper. It's not the sort of story where every plot thread is neatly tied up, but more like real life, where some may fizzle out while others shoot off suddenly into unexpected directions.

Lydia Waters is the burned-out associate pastor at a prosperous city church. On the surface, it would seem she's tired just because she works hard. But Lydia has misgivings that maybe there's something rotten at the core of the system itself. Senior Pastor Gordon Bates has left a trail of destructive actions behind him, but they're hard to bring to the light of day since he's a control freak who covers his tracks. And few people dare to question him anyway.

Another main character is Sid Vincent, the good-natured elderly janitor. He didn't want to make waves when his wife was unfairly treated, but now he's been asked to do something else which messes up his conscience. And there's Phyllis, Lydia's estranged mother, who regrets living her life for nods of approval. She's set off in a campervan as a grey nomad to figure out who she really is at last.

The book is all about social undercurrents, which are as prevalent in the City Church as anywhere else. The characters have several quiet revelations which may make us stop and wonder, 'Is this true for me too?' Is sheep mentality alive and well in intelligent people who claim that we think for ourselves? What are our real motivations for the good things which we do? Is the Kingdom of God really as simple as stopping our mad rush for validation to be with others?

Different readers may have different takeaways. One of my favourites is that life may not pan out exactly as we expect it to, based on our hard-earned credentials and careful plans. In fact curves in the path may appear even less prestigious in the eyes of the world, but still be exactly right.

For those who enjoy Bible study, it might be good to read this along with the Gospel of Luke, since several characters are wading through it and it spurs their personal revelations.

Thanks to the author for providing me with a review copy.