'The Pounamu Prophecy' by Cindy Williams 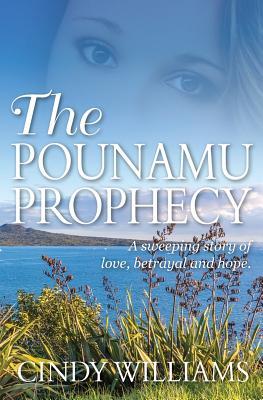 Since she watched her village burn to the ground, Mere's life has been anything but dull. Now as an older woman she has come to stay with Helene and James to finish writing her life story - a tale of injustice, revenge and reconciliation. But Helene and James have their own problems. After five years together, their marriage has become dull, predictable, boring ... and it starts to unravel. Weaving fiction with the traumatic history of the Ngati Whatua tribe of Auckland, The Pounamu Prophecy sweeps from the sultry heat of Australia to the verdant shores of New Zealand.

Genre: Contemporary fiction with some historical flashbacks, suitable for both Christian and general market.

MY THOUGHTS:
Mere is a wise Maori woman who is concentrating on writing her memoir now that her children are all grown up. She has plenty to share, about how she and her tribal family were victims of some corrupt political decisions in New Zealand in the twentieth century. She's staying as the guest of James and Helene, the son and daughter-in-law of an old friend of hers, and discovers their marriage of five years is a bit shaky.

I get James and Helene. Sure, it's easy to tell them to pull themselves together from behind the pages of a book, but hey, they're just being sucked into the trap of wanting to live the Australian dream and have it all (whatever that means). They both have consuming occupations, as she's a doctor and he's trying to start his own graphic design business. She's bored with the routine they've sunk into, he feels she doesn't support his dream, and their 'needs' stretch along with their budget. Then the unscrupulous but attractive Steve and Nicolette step onto the scene, adding to the main couple's illusion that maybe their lives should have panned out way different.

No matter what their faults, both James and Helene are generous hosts, honouring his mother's request and making Mere feel welcome. They never treat her presence as a burden, even though they're both trying to juggle many other stressful time commitments. That earned them my respect, because I get sick and tired of stories in which protagonists use their preoccupation as an excuse for rudeness. I also like the feeling of anticipation which is set up from the start. We know Mere's presence is bound to have something to do with James and Helene changing their attitudes, and her input will probably be something the reader can take on board too, since we live in James and Helene's same world and sometimes battle with similar feelings.

The significance of the book's title only becomes evident toward the end, tying everything together. On the surface, it would seem that Mere's sad personal history is poles apart from the first-world, metropolitan problems that James and Helene are living. You have to get to the end to see what happens, especially around the themes of forgiveness and deciding what really matters.