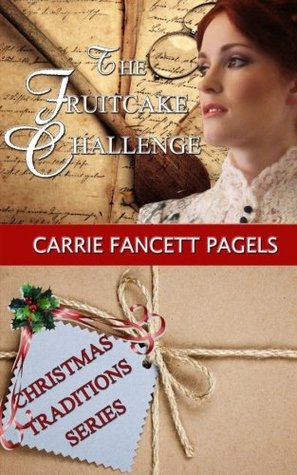 2015 Reading Challenge, Week 49 - A Book you started but didn't finish
I started it in December last year, but then after Christmas, I set it aside and forgot about it. To get into the spirit of the season, I read it over from the start, and finished it this time around.

When new lumberjack, Tom Jeffries, tells the camp cook, Jo Christy, that he’ll marry her if she can make a fruitcake, “as good as the one my mother makes,” she rises to the occasion. After all, he’s the handsomest, smartest, and strongest axman her camp-boss father has ever had in his camp—and the cockiest. And she intends to bring this lumberjack down a notch or three by refusing his proposal. The fruitcake wars are on!

MY THOUGHTS:
This story is set in a lumberjack camp at which the heroine, Jo's father is the boss. Tom seems to be one of the more educated and refined of the bunch, which gives her the idea that he has tickets on himself. As it nears Christmas, he issues a challenge. He'll propose marriage to any lady on the camp who can make a fruitcake as good as his mother's. Annoyed by the way the others jump to it, Jo determines to make the best fruitcake if it kills her, just so she can have the pleasure of turning him down. That's a cute premise to get anyone in the spirit of the season.

This is a cruisy little holiday read which gets you hungry at times, as tastes and smells are described. There's a bit of humour too, as the guys at the camp banter with each other, including the boss' big, tough sons who tend to be over-protective of their sister.

The book has a countdown quality to it, as time ticks away to the finale which occurs at Christmas. Stories in which everything ends up neatly to the benefit of everyone are probably easiest pulled off at this time of year. It has its share of coincidences and cute, tricky maneuvres.

Now I feel like going to try and bake a fruitcake.