I wasn't bored, but thought I was 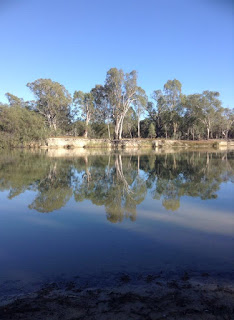 My favourite thing to do as a kid was something with no name that I knew of, so I made one up. It was 'acting out books', a sort of cross between reading and role playing. I'd choose a character to identify with, then become that person, walking around with a book in front of my nose, using things around my house and neighbourhood as props. As we were suburbanites, my bike stood in for a horse more times than I can count. Somehow I managed to look out for obstacles as I read.

Among my favourite books to act out were magical adventures written by Enid Blyton. I'd be Bessie climbing the Faraway Tree (aka Dad's big wooden trellis) or Mollie flying over fantastic landscapes in the Wishing Chair. One of Blyton's most common themes seemed to be, 'As you carry on with your ordinary, everyday life, you never know what might happen.' These children were simply exploring their local woods or buying a present for their mother, when voila! They were accidentally sprung into the most surreal other-worlds that seemed to hover just behind a curtain. Same with Lucy, hiding in a wardrobe in the old country house and accidentally discovering Narnia. It was great fun pretending to be these characters, but then I'd be called back to real life.

It made my little Primary School heart a bit grouchy and cynical. I'd grumble, 'I wish something good like that would happen to me, but it never will. My life is just full of boring school and being asked to tidy my room, day after day.' Standing on the end of the supermarket trolley while my parents bought groceries seemed to be the most exciting thing that ever happened to me. I was setting myself up for an attitude of discontentment it was hard to shake off later.

One of the books I read recently, The Solitaire Mystery, brings out my attitude in a unique way. The young hero's father often remarks that ours is a brilliant and amazing planet on which to live, and those who get jaded and look for interest elsewhere are short-sighted. He shakes his head over the people he sees dashing around seeking excitement on some different plane. In his opinion, the angel whisperers, ghost hunters and Martian seekers just don't get it. They miss the point that they are already included in the pinnacle of God's creation, for if anybody ever discovered another place like our earth, we'd all be bowled off our feet to put it mildly.

Imagine the excitement in the media, if scientists discovered a distant world populated by beings like us, who build cities, write books and create art. Even if it just had our vibrant colour and ecology, diverse flora and fauna, we'd be staggered. What if it had our ideal climates for human life, and thousands of different taste and smell experiences to offer? People would soon be talking about ways to get there. It begs a question from him, which he's surprised so many others don't seem to ask. 'If you'd be amazed by that, then why aren't you more impressed by your own surroundings, and what our world has to offer every day?'

Only in retrospect as an adult did I realise that those hours spent on my own were as magical as I could get. I was totally immersed and happy acting out books. In fact, it was probably better pretending to have those adventures than really having them. Far safer with no real risk of danger. I hadn't come across Helen Keller's quote, 'Life is either a daring adventure or nothing,' but my experience proved it quite true, only when I looked back. As I said, I wasn't bored, but thought I was.

Maybe Robert Louis Stevenson summed up the subject in his Happy Thought, 'The world is so full of a number of things, I'm sure we should all be as happy as kings.'