'The Blue Castle' by L.M. Montgomery 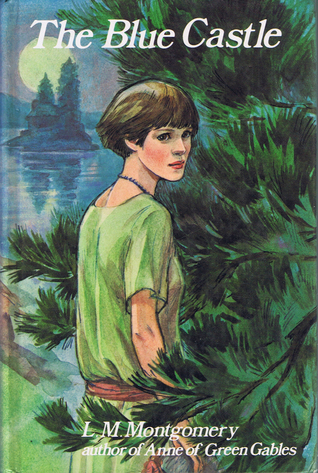 Because it was L.M. Montgomery's date of birth a couple of weeks ago, I got nostalgic and pulled a book from shelf I haven't read in years.

Valancy lives a drab life with her overbearing mother and prying aunt. Then a shocking diagnosis from Dr. Trent prompts her to make a fresh start. For the first time, she does and says exactly what she feels. As she expands her limited horizons, Valancy undergoes a transformation, discovering a new world of love and happiness. One of Lucy Maud Montgomery's only novels intended for an adult audience, The Blue Castle is filled with humour and romance.

I just noticed that the Goodreads blurb called this one of Montgomery's only novels for an adult audience, and I agree with that. In spite of the recommendation at the start of my paperback, and how quick it is to read, I believe this book may be more special for adult women than girls around 12. I read it when I turned 13, and have just re-read it now. It was far more meaningful the second time. Although I enjoyed it, Valancy's plight didn't pack the same punch at that age. I was able to understand it with my head, but I'm sure it took more life experience under the bridge to grasp it with my heart.

We may think of Valancy's dreadful Stirling clan as the type of funny caricature LMM knew how to write so well, but the funny thing is we recognise people out there like them! Walking, talking, one-sided caricatures, in our families, workplaces and communities. And many of us are taught from a young age to put such a lot of faith in what say about us and how they treat us.

I love the way Valancy approaches her transformation. She knows what to focus on. People's opinions of her were part of what caused her narrow, henpecked life, but she knows better than to attempt what so many of us think is logical, to fix things by changing people's opinions. She makes the more wise move, and decides that as we have so little control over other people's opinions, she'll simply shrug them off and live a life more true to her inner values.

Sometimes we need to ask for what we want. I'd forgotten the way Valancy did that. She didn't dare change her life until she believed she had nothing to lose.

Barney Snaith is full of appeal from our first glimpse of him. He's genuinely content and happy, despite the way people look down their noses at him and invent a horrifying reputation, while Valancy has been miserable her whole, squeaky clean, obedient life. By the end, I was thinking he deserves to be ranked up there with literature's great, romantic heroes. I had to laugh when I read what another reviewer wrote, that his lack of acclaim might be to do with his stodgy name (although in recent years we have Barney Stinson from 'How I Met Mother sitcom, whose name is similar, and has enjoyed a lot of popularity). Anyway, I'm sure Barney Snaith wouldn't even want to be on a list with the likes of Edward Rochester, Fitzwilliam Darcy and Rhett Butler, so he might be glad people didn't put him there.
Posted by Paula Vince at 3:03 PM