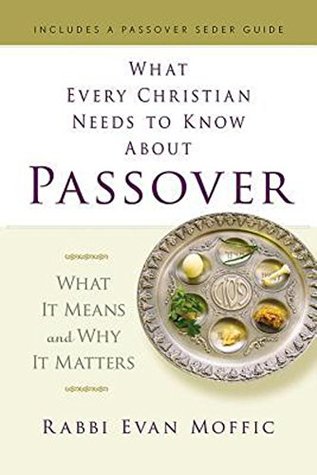 The Passover was celebrated by Jesus and the disciples the last time they were together. Now popular speaker and writer Rabbi Evan Moffic brings an understanding to the Last Supper that will forever change how Christians celebrate Communion and prepare for Easter. Beginning with the Hebrew Bible and Jewish history, Rabbi Moffic shows how these inform the roots of Christianity as he weaves together history, theology, Jewish practice and observances. Then he provides the background and resources for Christians seeking to experience an authentic Jewish Passover Seder and integrate it into their own preparation for Easter. Rabbi Moffic brings an informed and ancient perspective, explaining and bringing to life the source of so many of our modern Christian practices.

This is an interesting book written by a Jewish Rabbi for Christians. All his life, he has celebrated Passover meals, and sometimes suffered through them when he was a boy and they tended to drag on.

It begins with a good overview of the Bible's two most famous Passovers; the first one ever, observed by Moses, Aaron and Miriam on that tense night when Egypt's first born males were killed, and the one directly before Jesus' crucifixion, when he became the Lamb of God. I wonder how many young or modern Christians may not twig that when we celebrate Communion, we're essentially celebrating the Passover too.

A great chunk of the book outlines how to prepare and celebrate a traditional Passover if we should ever want to. Wow, to say a lot of preparation is involved is a vast understatement. It's not just the normal rushing about everyone does before dinner parties, but making super certain that the house is completely clear of breadcrumbs and anything which may contain leaven. It gives me greater understanding of a lady from a non-Jewish background I read about, who had major panic attacks when it came to preparing Passover for her husband's Orthodox extended family.

The book delves into the significance of the central elements on the table, including the Seder Plate and the candles. It helps us understand how nothing slips through which isn't filled with rich symbolism, and the ritual objects are intended to connect those around the table to one another and to God. Although I've never felt brave enough to have one of my own, I've attended a couple organised by others. They were very special, and if you ever want to try your own Passover, this is the book you would want to refer to. I think what stood out to me most was that you wouldn't want to do it flippantly, but as a solemn, meaningful experience as it was always intended.

Thanks to NetGalley and Abingdon Press for my review copy.