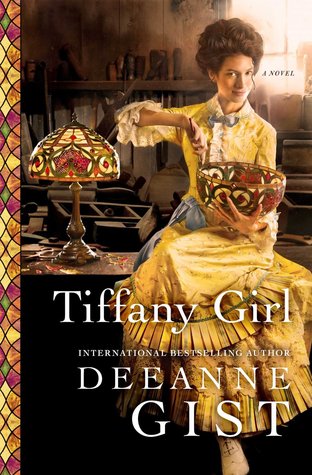 2015 Reading Challenge, Week 27 - A Book by a Female Author.
Any and many could fit this category, but as this one has such a beautiful, feminine cover, and an interesting theme about a woman's true place in society, I'm choosing it.

As preparations for the 1893 World’s Fair set Chicago and the nation on fire, Louis Tiffany—heir to the exclusive Fifth Avenue jewelry empire—seizes the opportunity to unveil a state-of-the-art stained-glass mosaic chapel the likes of which the world has never seen.

But when Louis’s dream is threatened by a glassworkers’ strike months before the Fair opens, he turns to an unforeseen source for help: the female students at the New York Art Institute. Eager for adventure, the young women pick up their skirts, move to boarding houses, take up steel cutters, and assume new identities as the “Tiffany Girls.”

Tiffany Girl is the heartwarming story of the impetuous Flossie Jayne, a beautiful budding artist who is handpicked by Louis to help complete the Tiffany chapel. Though excited to be an independent New Woman at a time when most of the fair sex stayed home, she quickly finds the world is less welcoming than she anticipated. From a Casanova male to an unconventional married couple and a condescending singing master, she takes on a colorful cast of characters to transform the boarding house into a home while racing to complete the Tiffany chapel and make a name for herself in the art world.

As challenges mount, her ambitions become threatened from an unexpected quarter: her own heart. What or who will claim victory? Her dreams or the captivating boarder next door?

This beautiful novel is based on history. Just before the 1893 Chicago World Fair, Mr Louis Comfort Tiffany lost his glass workers and glaziers in a strike. They thought that because of the dicey timing, he'd cater to their demands for better pay and working hours. He called their bluff by hiring several female art students to finish the job in time for the Fair instead. These girls were delighted to be using their talents, regardless of the conditions, and added fuel to an already fierce debate about a woman's true place.

I really enjoyed the fictional escapades of Flossie Jayne, one of these Tiffany Girls. I think many contemporary readers really like heroines who have faults and blind spots, and she has plenty. That's where the book gets interesting. Many times, we assume that a person's character defects are their own fault, don't we? I don't think that's at all the case with Flossie. Her over-confidence and inflated sense of her own talent are probably inevitable, when we consider her personal history. Her sheltered upbringing and doting parents have helped her to assume that she's brilliant at everything she sets her hand to, and that the world revolves around her. Although the events of the story made me cringe for her several times, (and you'll know when you get there), it's written in such a way to show us that getting out into the world did her the world of good, but not necessarily in the ways she expected.

I looked at a few other reviews before starting this book, and expected not to like the hero, Reeve Wilder. Others glossed over him as a journalist who resented working women, but he wasn't as black and white as all that. Like Flossie, when we take his personal history into account, his reasons for thinking women belong in the home are easy to understand. In fact, I found his attitude toward them a compliment rather than the opposite, and know several modern women who'd agree with him. He grows through the story anyway, refining his opinions when he perceives that they're too rigid. And never, from the very start, does he treat women with superiority or rudeness. He's actually a very sentimental hero, for a person who doesn't think he is.

We get to experience the World Fair through Flossie's eyes. It sounds impressive enough for those of us who live in the twenty-first century, so it's no wonder these Victorians found it so stunning. I loved the way frequent pictures and photos brought the era to life, and learned a few things, showing that they were basically the same as us. For example, I got the feeling that Sears and Roebuck was a bit like the Victorian version of IKEA, and the poor girls had to contend with 'bustle pinchers' who were just common, forward men. In fact, they wouldn't get away with it in our era, as they did then.

My only issue with the book is that it seemed a bit drawn out at the end. A lot of activity and changed was compressed into it, but the pace of the last few chapters felt a bit different to the rest of the story, which I powered through. Maybe it's because the bulk of the novel took place in a reasonably short amount of time, and last little bit spanned several months. Overall, it's a story which I'm sure all lovers of Victorian time settings will love.