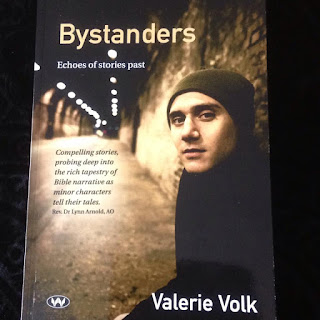 2015 Reading Challenge, Week 28 - A book with a one-word title.
Its subtitle is 'Echoes of stories past' but the main title is just one word.
Valerie Volk is a fellow South Australian author and a friend of mine. She has published several books of award-winning poetry, and this fascinating book of short stories is hot off the press.

Bystanders is a collection of short stories, each one exploring a minor or incidental character in the Bible. It is a work of fiction written to encompass the Bible's information and extend it by imagination, to flesh out the people and enable readers to see the similarities between these people of long ago and ourselves.

At the end of the book there is a resource for further study, particularly for small groups, with questions to stimulate thought and discussion, furthering the reflective process the stories naturally stimulate.

MY THOUGHTS:
Fifteen Bible stories are retold from the points of view of observers who didn't have pivotal roles. This shift makes the stories multi-faceted, showing them in a whole new light.

Some of the bystanders are close to people who did feature most strongly. Esau's wife, Basemath, quietly fumes about the stunt her husband's twin and their mother pulled on him. The mother of Elisha's servant, Gehazi, wonders if her son's attraction to material goods was partly her fault. The father of the former blind man doesn't feel completely willing to thank Jesus for his son's healing, since it brought a decrease in begging earnings and trouble with the authorities.

Other bystanders happened to be nearby for whatever reason, perhaps in their line of work. The soldier who delivered messages between David and Joab gives his opinion on the king's dealings with Uriah and Bathsheba. The son of the bandit who attacked the Good Samaritan lurks in the shadows, watching the aftermath of the mischief.

Revisiting action through the eyes of people we wouldn't expect packs a powerful punch. They sometimes highlight how crazy the ways of God can strike people, compared to human wisdom. Moses' father-in-law, Jethro, ponders what appears to be a suicide mission to move the Israelites out of Egypt, when the only reasonable response would seem to be, 'It's not going to happen.' The man who could have won Ruth's hand explains why he chose to waive his family rights and let Boaz make the move as kinsman redeemer instead. A servant in the household of Mary and Martha describes the general sense of disbelief when the respected Teacher turns out to be a simple, uneducated country yokel from Galilee with a rough rabble of followers, who twists the prophets' words until they make more sense than before, if possible.

The bystanders also give the stories a feeling of immediacy, evoking time and place so vividly. I found it worth jotting down a few quotes from the unusual perspectives.

Pontius Pilate's wife, who'd known him since childhood, explains how he became a man 'whose name will be remembered in ways that he'd flinch at.'

A man waiting in the crowd to stone the woman caught in adultery looks at Jesus and reflects, 'If he truly wants to be seen as a man of God, he needs to pick up a stone himself.'

My favourite perhaps, is the line ex-Persian queen Vashti says of Esther. 'She might have saved the Jews, but she didn't do much for women.' That was quite thought-provoking, and got me laughing. The discussion questions at the end are worded in such a way to stimulate deep thought, rather than simple answers, so I'd recommend the book for any group or person who wants to delve beneath the superficial.