'The Kitchen Daughter' by Jael McHenry 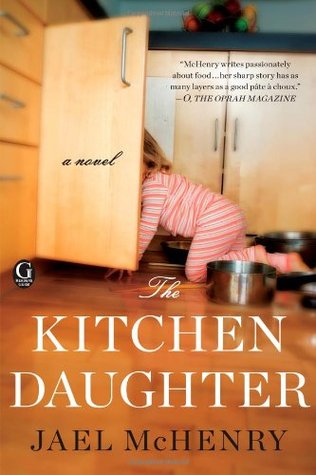 2015 Reading Challenge, Week 20 - A book from the bottom of your 'to read' list.
I dug down to my first TBR page on Goodreads, which as you can imagine was started a long time ago. This is the first book from it which arrived at my local library, so this was the one it turned out to be. I'm so glad, as I loved it!

After the unexpected death of her parents, painfully shy and sheltered 26-year-old Ginny Selvaggio seeks comfort in cooking from family recipes. But the rich, peppery scent of her Nonna’s soup draws an unexpected visitor into the kitchen: the ghost of Nonna herself, dead for twenty years, who appears with a cryptic warning (“do no let her…”) before vanishing like steam from a cooling dish.

A haunted kitchen isn’t Ginny’s only challenge. Her domineering sister, Amanda, (aka “Demanda”) insists on selling their parents’ house, the only home Ginny has ever known. As she packs up her parents’ belongings, Ginny finds evidence of family secrets she isn’t sure how to unravel. She knows how to turn milk into cheese and cream into butter, but she doesn’t know why her mother hid a letter in the bedroom chimney, or the identity of the woman in her father’s photographs. The more she learns, the more she realizes the keys to these riddles lie with the dead, and there’s only one way to get answers: cook from dead people’s recipes, raise their ghosts, and ask them.

Ginny Selvaggio is a 26-year-old with Asperger's Syndrome whose parents have died suddenly in an accident. Cooking is her stress outlet, and quite by chance, she realises she can summon ghosts when she cooks from recipes written in the person's own handwriting. But she only has a short time with each of them before the fragrances of their dishes waft away, and visits are limited to once only.

My heart warmed to Ginny straight away. She couldn't avoid a complex that she lacks something essential, since people treat her different from others. It's easy to shun what we don't quite understand, but this book makes it clear what a lot we may miss when we don't make the effort. I like Ginny's 'Normal Book' in which she tries to convince herself that she really is the same as everyone else, and most of all, I enjoy the way she perceives people's voices in terms of food and drink. Amanda's is like orange juice, sweet but sharp, Dad's sharp and round like tomato juice, David's dark and muddy like coffee left on the burner, and Mum's, like regular spearmint but with a laugh like popping bubble gum. From those descriptions, I could certainly hear them.

How interesting that Amanda was cast as the antagonist, since she seems pretty 'normal' to me. Perhaps she represents a side of most of us which we flinch from facing. It's easier to criticise somebody else than acknowledge it. The desire to want to run the show has definitely surged up in me at times. I hated the way Amanda fobbed her sister off whenever the subject of the house sale came up, yet as this story is told from Ginny's point of view, Amanda is bound to show up as domineering and controlling. It's obvious from the things she says that it's a different story from her own vantage point. Maybe it's a bit of a worry that so many of us are ready to come down so hard on a frazzled young mother who has just lost her parents.

In the author interview at the back of the book, Jael McHenry states that agents advised her not to include the Asperger's aspect, thinking it might be harder to sell the book, but she stuck to her guns. I'm so glad she did, as the Asperger's theme was definitely a highlight, and it would've been a poorer book without it.

The story leaves us with the comfortable feeling that just because people may not understand us, doesn't mean we're bad. It's about keeping our wits about us, because when well-meaning people like Amanda 'put a word on us' it may mean the difference between whether we prosper in own unique way, or cave in to the labels which are thrust on us. And so many us really don't fit at the top of the bell curve when it comes to definitions of normal. Let's not think harshly of ourselves for not fitting neatly into the world's narrow definition.

David: What have you got?
Ginny: A personality.

I'll be careful to give no plot spoilers here, but the part near the end where Ginny makes the hot chocolate - I'm sure many of us figured out what was happening before she did. I groaned out loud. I wish that part of the story could have worked out differently, but it's a neat wrap-up for all that, and I consider it an upbeat book in spite of everything.

It's a story I recommend to all foodies and anybody with an Asperger's diagnosis in their family.