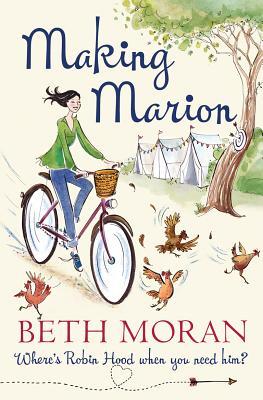 Marion Miller came to Sherwood Forest in Nottinghamshire to discover her father's mysterious past, but all she has to go on is a picture of her father dressed up, it would seem, as Robin Hood. It takes Marion all she's got to come out of her shell and get to grips with life on a busy campsite, where the chickens seem determined to thwart her and an unfortunate incident with a runaway bike throws her into the arms of the beautiful, but deeply unimpressed, Reuben. Marion's would-be boyfriend Jake, and Reuben's stunning fiancee Erica, conspire to leave little room for Marion to daydream about the twinkling eyes of her rescuer, nevertheless. Can Marion really find peace, and perhaps even love, among the pigs?

Marion Miller's father was the only good part of her traumatised childhood, but he died long ago. Armed with a youthful photo of him dressed as Robin Hood, she goes to seek other people's memories of him in Sherwood Forest, where he used to live. Getting a job at the Peace and Pigs Holiday Park gives her a good home base for her detective work, but Marion becomes the target of an anonymous vandal. It seems the photo of her father has shaken up a can of worms for some local who feels threatened.

There is a lot of excellent writing compressed into this story, making me not want to put it down. Marion's journey from a painfully shy girl with selective mutism to a young woman who learns to appreciate herself unfolds gradually in flashbacks. The mystery she discovers about her father's earlier life is intriguing. Descriptions are humorous and colourful. The supporting characters are multi-dimensional, including heart-throb Reuben, whose glamorous girlfriend, Erica, seems Marion's antithesis in every way.

Using a holiday setting for a novel has always appealed to me. How I wish I'd come across a caravan park like 'Peace and Pigs' when I visited Great Britain years ago, because to be honest, I found most of them to be more like Morris Middleton's house (you'll know what I'm talking about when you get there). Maybe this novel is a hopeful sign that things have changed since I visited in the early nineties.

It's great to see some British Christian fiction, which I found different to the American Christian fiction which is so abundant. In fact, some wouldn't consider this novel Christian fiction at all. Several readers would call it far edgier, which I didn't think a bad thing, being an Aussie. It reminds me more of the Australian Christian fiction which I and some of my friends have written. Questions are always raised as to whether we should choose to write for a fixed audience with definite bans regarding certain language and possibly immodest scenes, or do we reach out to a wider group of readers, with the gentle message that God is present and active behind the scenes? I love the way this book did just that.

This book contains one of the most powerful forgiveness scenes to be found, as Marion grapples with the problem of how to forgive somebody who has destroyed her childhood, when that person seems to have found peace and forgiveness of their own! The story weaves so effortlessly from slapstick to raw heartaching drama and back again with ease. The bit of back story which described Marion's first fumbling attempt in finding her voice again is one which will stay with me for a long time.

Thanks to Net Galley and Lion Hudson Publishing for my review copy.