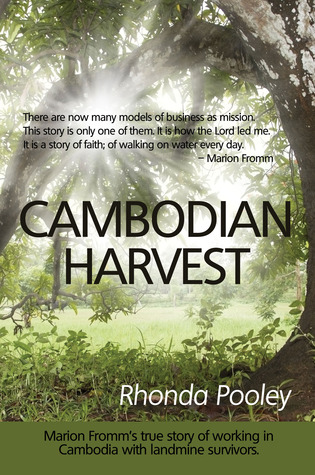 A single woman in her sixties travels to Cambodia to set up a dried fruit factory - a project to provide landmine survivors with an income and hope for the future. Overcoming official corruption, cultural prejudice and minimal financial support, her inspirational story will challenge everyone who thinks they are too broken or too old to make an impact for God in this world.

Marion Fromm was on a short term mission trip to Cambodia when she noticed that many beggars were missing limbs. She was shocked to find out they were all victims of landmines which were planted in the war between the Khmer Rouge and nationalists forces, designed to cripple their victims. Shunned by almost everyone, these people found it impossible to earn a living without relying on charitable gestures, which were not often forthcoming.

What follows is one woman's true story of being the change she wanted to see in the world. At an age when many Australians are thinking of retiring, Marion relocated to Cambodia and set up the Cambodian Harvest Dried Fruit Factory, to employ landmine victims. She learned the finer points of running a business as she went.

It's clear that it wasn't smooth sailing. Marion faced and overcame many setbacks during her life. She's revealed in this book as a lady sensitive to God's prompting, with a 'powerful' personality, which sometimes caused friction but served her well. I like the aspect of how some character traits which may rub others up the wrong way are also strengths. Marion comes across as a person who would make up her mind and not budge an inch, but perhaps she needed that measure of firm-mindedness, as she had such a remarkable calling. For example, she drew up the architectural plans of her factory from a detailed vision God gave her. People who aren't easily swayed are definitely needed in the world.

Between each chapter are true stories and testimonies from several of the employees of how hopeless their lives used to look before joining Marion's staff, compared to how well they are going now. Not everybody gets to see the direct difference their own work is making in several lives, and it's a great tribute from Marion's friend, Rhonda Pooley, who made it her own mission to write this book, to bless and encourage us all to not give up on God given dreams.

You may also read my interview with Rhonda Pooley, about the writing of this book, here
Posted by Paula Vince at 10:22 PM