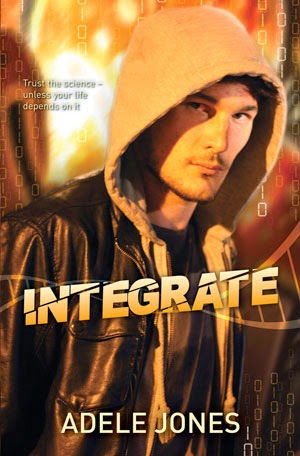 Blaine Colton had been handed a genetic death sentence until revolutionary gene therapy changed his life. Living a relatively normal existence, he is called to an unscheduled post-treatment appointment just weeks before his eighteenth birthday. Informed that his life saving procedure was never approved, he is held against his will for his status as an apparent illegal GMO. Subjected to constant testing, refused contact with his parents and deprived of life sustaining medication, Blaine begins to suspect that something is wrong. Wanting answers, he escapes the Institute and ambitious Chief Scientist, Dr Melissa Hartfield. Now a fugitive with a failing body, Blaine must find Professor Ramer, the developer of his therapy. But the Professor has vanished and time is running out. Fast.

MY THOUGHTS:
Blaine Colton's life has turned around since revolutionary gene therapy helped him recover from a mitachondrial disorder which had him confined to a wheelchair, unable to control his motor skills or communicate for the first sixteen years of his life. Just a few weeks shy of his 18th birthday, he's given some bad news at a check-up and confined to the hospital for the further tests. He's told that he is considered a GMO (genetically modified organism) which would have been killed at once if he'd been any life form other than human.

Blaine had been thankful to have been given a normal life, having never known such a luxury before, but keeps learning frightening things, such as the possibility that he could be, as he expresses it, a 'walking biohazard', to put anyone he's in contact with at risk of some bizarre new disease he may be hosting, created by the toxins Professor Ramer used for his cure treatment. The only clear thing is that neither Blaine, nor Dr Hartfield, have the full picture.

I liked having the doctors, Melissa Hartfield and Eddie Jonick, as frequent point of view characters. It's clever writing, to have their thoughts and feelings laid before us, yet we're still challenged to try to figure out whether they are goodies or baddies. Just enough information is given to intrigue us, particularly with Melissa, making us wonder whether she's on the level or playing some sort of game with Blaine. If she is, what could her motivation possibly be?

Short, succinct chapters keep the momentum rolling along, probably fast enough to please the most restless and easily distracted young adult reader. They end at crucial spots, always giving us the motivation to read just one more. The exciting, 'in the nick of time' sort of ending has an edge of the seat quality too.

I like the setting, which I personally recognised. Although I'm not a Queenslander, I've been in Brisbane a few times in the last few years and recognised some landmarks, especially those along the river. I always appreciate books with Australian settings.

Most of all, this book makes me appreciate the heroism of anonymous medical staff who strive every day to make a difference in the lives of patients. How fantastic it will be one day, if young people with conditions such as Blaine's will be given the gift of normal lives. I hope there will be a sequel to this story, as I'd like to see more of the developing relationship between Blaine and Sophie, the girl he's always admired. I was intrigued to think that she grew up with him while he was confined to his chair, unable to articulate or communicate, and now suddenly, here he is able to do all of that.

I had an exciting interview with Blaine, which you can read here
Posted by Paula Vince at 11:31 PM