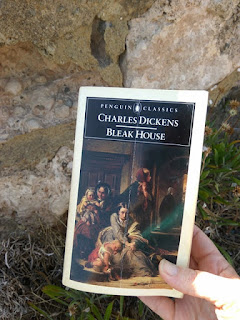 Bleak House opens in the twilight of foggy London, where fog grips the city most densely in the Court of Chancery. The obscure case of Jarndyce and Jarndyce, in which an inheritance is gradually devoured by legal costs, the romance of Esther Summerson and the secrets of her origin, the sleuthing of Detective Inspector Bucket and the fate of Jo the crossing-sweeper, these are some of the lives Dickens invokes to portray London society, rich and poor, as no other novelist has done. Bleak House, in its atmosphere, symbolism and magnificent bleak comedy, is often regarded as the best of Dickens. A 'great Victorian novel', it is so inventive in its competing plots and styles that it eludes interpretation.

MY THOUGHTS:
Here is my choice for a Classic with a Place Name in the Title in the 2020 Back to the Classics Challenge. It's always a pleasure to return to Dickens' London, where fog and mud reign supreme and we know that whenever any character bobs to the surface we're bound to see them again later, possibly under surprising circumstances. He pulls so many divergent threads together, which puts me in awe of his genius when I consider that his long novels were originally published as magazine serials. It means he obviously had it all planned in his head before Issue 1 hit the newsstands.

Dickens' major gripe in this novel is the frustration of court cases that drag on forever, driving some people to put their lives on hold while waiting for a verdict that may have the potential to change everything. The problem is, decisions are so prolonged that successive generations inherit all the angst. It's these non-criminal, inheritance sort of spats that absorb costs to help lawyers feather their nests, but merely break the hearts of the clients concerned and send them bankrupt.

The long-running court case in this story is Jarndyce versus Jarndyce, and the current Mr Jarndyce chooses to stand aloof from all the uncertainty and take three needy young people to live beneath his roof. Richard Carstone and Ada Clare are distant cousins whose interests are also caught up in the court case, and Esther Summerson is a young orphan he invites to keep house for them all. Esther narrates great swathes of the story. Dickens has given us many, many super-sweet, good girls, but she is the only one we are ever allowed into the actual head space of. And she's such a great point of view character!

Esther was brought up by a stern, unloving aunt who taught her that she was born as a disgrace. When Mr Jarndyce becomes her kind benefactor, she's stoked. All of Esther's comparisons are in a positive direction, since she's trained herself to choose gratitude over grumbling every time, and never grows sour or jealous of the bounty of others. She's a perfect example of how mood management should work, and succeeds in setting contentment as her default. The irony is that Esther's existence has been so hush-hushed, since she's the most admirable person in the whole book (with the exception perhaps of the guy she eventually marries.)

An intriguing underlying mystery concerns the identities of Esther's parents. It's easy for the reader to figure both out early on, and then the fun comes from watching it dawn on others as the story unfolds.

There's a very cool cast of characters across the board. It includes freeloaders like old Mr Turveydrop and the parasitic Harold Skimpole, who is surely one of the most despicable leeches in literature. It appears Dickens based his character on a fellow Victorian author, Leigh Hunt, and everyone who knew them both instantly recognised Hunt in Skimpole. The two writers were sort of friendly before Dickens wrote Bleak House, but definitely not afterwards!

There are dysfunctional families like the Jellybys and Smallweeds, and those who have chosen numbness over feeling. The scenes in which Lady Dedlock and her lawyer Mr Tulkinghorn have conversations with huge stakes, yet both apparently try to outdo each other for nonchalance and languidness are very well done. There is so much intense under-reaction from both, the air is charged with it.

This story hasn't knocked Our Mutual Friend and Great Expectations from the top of my Dickens favourites list. I think there's a little too much of poor Richard's plight and Skimpole's dodgy shenanigans for that. But it's well worth a read, especially for the success in which Dickens pulled off a first person female point of view in Esther, who is definitely one of my favourite characters.