'The Importance of Being Earnest' by Oscar Wilde 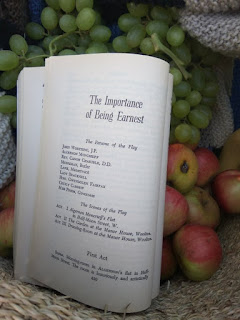 Oscar Wilde's madcap farce about mistaken identities, secret engagements, and lovers entanglements still delights readers more than a century after its 1895 publication and premiere performance. The rapid-fire wit and eccentric characters of The Importance of Being Earnest have made it a mainstay of the high school curriculum for decades.

MY THOUGHTS:
This is my Classic Play category of the 2019 Back to the Classics Challenge. I remember thoroughly enjoying it as a High School Drama student who got to watch a movie version on TV during a lesson. It's great the second time around too. Fun to read, but a ridiculous load of nonsense. Here's basically how it goes down. Jack and Algernon are a pair of well-to-do young gentlemen in the Victorian era, both in the habit of telling lies to help them wriggle out of tiresome commitments. They've taken the concept of the pretend friend to an expert level, each using one to shirk their duties and help them look good at the same time.

Jack's ruse is a rebellious younger brother named Ernest, who needs frequent help out of jams. And Algy's is a perpetual invalid friend named Bunbury, with a knack of having relapses and needing support just when Algy is expected to attend something boring. But both Jack and Algy play the game so hard, it leads to hilarious clashes (such as Jack mourning his dead brother who Algy is pretending to be).  Eventually two young ladies named Gwendolen and Cecily each believe they're engaged to the same guy named Ernest, who doesn't really exist.

There's also a subplot of Jack's obscure origin. He was discovered at Victoria Street Station as a baby in a handbag, and the bossy autocrat Lady Augusta Bracknell won't let him court her daughter, Gwendolen, until his past is cleared up, which he doubts he can ever manage to do after 28 years. Naturally everything does come together very comically, and Wilde twists circumstances in such a way that all the lies Jack has been telling accidentally turn out to be the truth.

There has been lots of satire written about the Victorian era by modern authors who look back on its more negative aspects in retrospect, but Oscar Wilde was taking shots at it while he was actually living in it. He wasn't a rebel of the 'naughty nineties' for nothing. There are loads of sassy one-liners which keep being volleyed back and forth like a tennis match. And they're all delivered with perfectly straight faces, which probably makes Wilde one of the pioneers of the sort of witty British sitcom we all know and love.

It's such a shame Algernon's term of 'Bunburying' hasn't really taken off in our common lingo, because it deserves to. The truth is, I was brought up in a family of Bunburyists without even knowing it. Making up untrue clashes and prior engagements takes a bit of ingenuity, so they might as well be good ones, that paint us in the best possible light. I guess I've had a go myself over the years, but I've reformed and become more honest. As we get older, our memories aren't so good, so Bunburying isn't really worth the stress it might cause in the long run.

The sneaky duplicity of this sort of behaviour gives the play's title its irony. Both Gwendolen and Cecily have latched onto the idea of marrying men named Ernest, because it's such an honest, straightforward and direct sort of name. Yet we audience know that neither of these two guys are any such thing. They are duplicitous, deceitful fibbers, regardless of their good motives. Maybe it's Oscar Wilde's way of getting us to ponder whether anything is like it seems on the surface.

By the end, I can't help thinking it would be interesting to trace both young couples through married life. Jack and Gwendolen are both trying to play the game set by society. She's got the Victorian polish and sophistication down pat, making her a mini version of her scary mother. And he knows the right moves and the respectable, pompous things to say. But Algernon and Cecily might be another case altogether. He's so mischievous and bright, breezing through life taking nothing seriously, and treating everything like a big game, while she's an innocent and romantic young rustic girl who still chafes at restrictions and lets her imagination run wild. It'd be fun to see how these two egg each on through matrimony. I wonder if they're Oscar Wilde's idea of a new generation of thinkers.

Sadly, the public never really got to find out. He got in deep trouble within four days after this play's first performance on Valentine's Day 1895, when he was unmasked for being gay by his young lover's furious father. It was downhill for Oscar Wilde from then on, leading to his imprisonment, and premature death after hard labour. The fate of the talented playwright gives the comedy a touch of sadness, but keeping on enjoying it is the best tribute to his memory. After reading it, I watched the most recent movie with Colin Firth and Rupert Everett, which brought the opulence of the Victorian era to life in a brilliant way, and I recommend that too.

You might also enjoy my review of Wilde's novel, The Picture of Dorian Gray