'The Prime of Miss Jean Brodie' by Muriel Spark 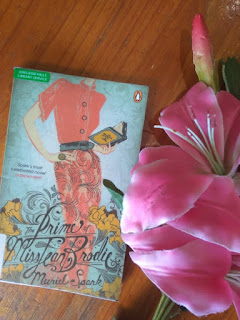 At the staid Marcia Blaine School for Girls in Edinburgh, Scotland, teacher extraordinaire Miss Jean Brodie is unmistakably, and outspokenly, in her prime. She is passionate in the application of her unorthodox teaching methods and strives to bring out the best in each one of her students. Determined to instill in them independence, passion, and ambition, Miss Brodie advises them, "Safety does not come first. Goodness, Truth, and Beauty come first. Follow me." And they do--but one of them will betray her.

MY THOUGHTS:
This is my choice for the 20th century classic section of the 2019 Back to the Classics Challenge. Miss Jean Brodie is a progressive, stylish teacher who works at a traditional girl's school in Edinburgh of the 1930's. She's suffered loss in her life, and decides to leave her stamp on the world by hand-picking a select group of girls to mould and shape in her own image. So Sandy, Jenny, Rose, Monica, Eunice and Mary become 'the Brodie set.' They're despised by others because of the blatant favouritism, yet envied because they seem to have a lot more fun.

Miss Brodie scorns conventional lessons and teaches her own romantic life anecdotes as if they're curriculum. She sets out to inspire the girls in elusive traits like panache and flair. One of her mottoes is, 'give me a girl at an impressionable age and she's mine for life.' The predatory sort of connotations from this line aren't far off the mark. She convinces her special six that they're fortunate to enjoy the benefit of her great wealth of worldly knowledge while she's in her prime. And she promises that if they take all her instructions on board, she'll make them into the 'creme de la creme.'

The parents are flattered that their daughters have caught the attention of such a confident and elegant woman, without being aware of a more fishy agenda. Miss Brodie herself is perhaps not fully aware of it. She comes across as a needy narcissist who feels she's missed the boat, and wishes to stamp her own image on each of the six students' special talents. There's a strong sense that her hidden agenda is to make them copies of herself. And as we find out when we're already well into the story, her manipulation arguably crosses into 'whacko' territory, involving a couple of the male teachers.

At times it seems Muriel Spark is inviting readers to weigh up whether Jean's influence is good or bad. Some of her ideas may put her ahead of her time. 'To me, education is a leading out of what is already in a pupil's soul. To Miss Mackay (the headmistress), it is a putting in of something which is not there. I call that intrusion.' But the scale crashes the other way when we consider her plans for a pair of her girls to embody her own fantasy. And also her critical dismissal of other former teacher's pets of hers, in favour of those she's decided can best serve her purpose.

Miss Brodie is certain none of her girls would ever betray her to Miss Mackay, and spends her twilight years trying to figure out which of them did. That girl has finally thought things through and decided she did nothing wrong, since 'betrayal involves the need for loyalty in the first place.'

At first I wondered why Jean Brodie so stubbornly resisted the idea of moving on to teach at a more innovative school, which might have embraced her teaching methods? Then it becomes clear, the 'crank schools' wouldn't have Mr Gordon Lowther and Mr Teddy Lloyd, who are vital players in her weird, kinky plans. It's interesting to see Miss Mackay dig around for solid evidence of malpractise before firing Brodie. Unfair dismissal claims might have been as much a factor in the thirties as now. It surprises me though, that she had to wait for one of the pampered students to rat on Brodie. It appears there was any number of hostile female teachers who might have been able to scrape up something reasonable sounding. Brodie didn't exactly keep her nose clean.

If this is Muriel Spark's most celebrated novel, as the cover says it is, I'm not sure I want to discover more. Her writing leaves a sort of sour aftertaste. I think it's partly because Spark so often pokes snide or cynical digs at her own characters, making me wonder that if even she doesn't really like them, then why should we? Although many characters are clever, none are really lovable. When she delves into their deepest thoughts, we find they're full of varying shades of self interest. And the plot's fascination seems to hinge on a sordid, tabloid gossip sort of factor.

So I'm glad to finish. It's a short novel, but by the end I was fed up with repetitious descriptions of the girls. There were so many statements about Mary's stupidity and awkwardness, Rose's famous reputation for 'sex', whatever that was meant to mean, and most of all, references to Sandy's little piggy eyes. I'm sure she mentioned that girl's squinty peepers every single time she was in a scene? We get it Muriel, okay!

I'd intended tracking down the 1969 movie with Dame Maggie Smith in the title role, since I love her as Professor McGonagall. (Speaking of Harry Potter, 'The Brodie Set' is reminiscent of 'The Slug Club', but probably the other way around for many readers, since Miss Brodie came first.) I was so underwhelmed by the story though, I don't think I'll bother. To sum up my overall impression, there's a great line in the story. 'There was a whiff of sulphur about the idea.' Maybe I'll borrow that descriptive phrase straight from Muriel Spark to apply to her whole book, because the more I think about it, the more everyone in it stinks, to varying degrees.