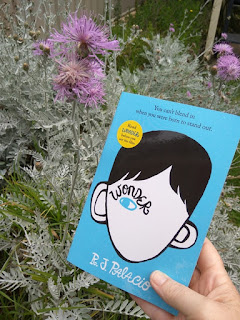 I won't describe what I look like. Whatever you're thinking, it's probably worse.
August (Auggie) Pullman was born with a facial deformity that prevented him from going to a mainstream school—until now. He's about to start 5th grade at Beecher Prep, and if you've ever been the new kid then you know how hard that can be. The thing is Auggie's just an ordinary kid, with an extraordinary face. But can he convince his new classmates that he's just like them, despite appearances?R. J. Palacio has written a spare, warm, uplifting story that will have readers laughing one minute and wiping away tears the next. With wonderfully realistic family interactions (flawed, but loving), lively school scenes, and short chapters, Wonder is accessible to readers of all levels.

MY THOUGHTS:
I've been slow to jump aboard this runaway bestseller, but now that the movie is soon to hit cinemas, my curiosity got the better of me at last.

Basically it's a very simple plot. Young August Pullman was born with a serious facial abnormality. He's undergone several remedial surgeries in his short life, and after years of homeschooling, he's about to start middle school. While some fellow students are willing to get to know the person behind his shocking exterior, others respond with fear or cruelty. The story is written in sections with different points of view, so we can also delve into what his friends and family are thinking and feeling.

If you really want to pick the plot apart, not a lot happens, but it's powered by high octane honesty and emotion from start to finish. Auggie is a very endearing main character who knows that he's as 'ordinary' as everyone else in every respect but the appearance of his face. And he knows that because of the face he presents, this will never dawn easily on anyone else.

I was pleased to see other characters treated with sensitivity as well as just August. He understands that an initial, split-second double-take is a natural reaction and doesn't take offence. In fact, he gets tired of how people's glances quickly slide away, as if they assume it's the tactful response. He would like to tell them, 'It's OK. I understand why you want to stare.' That sort of detail is among the strengths of the story.

But is the writing always perfectly executed? Well, I have to say not really. For a start, the humour is applied pretty thickly at times. To take one just one example, how much mileage can you get out of poor Mr Tushman's name? This is the book equivalent of one of those studio audience placards demanding that the audience laugh. Readers keep running into the message, 'In case you haven't twigged, this is a joke.' I prefer a more subtle humour that individuals can choose to take or leave. Anything that's so clearly explained is not as funny. In a similar way, small talk tends to drag on at times. This heavy-handedness is not really a feature you'd expect from bestsellers, but just shows how much may be forgiven and overlooked if only a story has heart.

Auggie's relationship with his sister Olivia, a.k.a Via, really touched my heart. There is potential for sibling resentment on both sides, and they both know it. She's the one with the attractive face, and he's the one whose needs have always had first priority. Via knows that she tends to be defined by who her brother is, and he's sensitive to her moods. But when it comes to the crunch, none of this really matters, because they're right on the same page, as loving family members should be.

After receiving the heady joy of a standing ovation, August decides everyone should receive one at least once in their lives. But there's a type of hero that never get their standing ovation, and I think part of their heroism is that they don't even expect to. Some of the excellence of this book for me was identifying these hidden heroes. There's August's non-academic friend Jack Will, who doesn't get an award at the ceremony like the smart kids, yet displays a lot of superior character traits that went under the radar.

Most of all, there's Isabel and Nate, August and Via's parents. I loved these guys. The fact that their son has tapped into inner strength, kindness and wisdom instead of bitterness and fear is greatly because of their influence, without a doubt. They were as unforgettable as August himself, proving that our input in just one life can make us heroes. They deal with carer's exhaustion, trying to spread themselves thin and often being in the firing line from both their kids. But even though Via criticises them at times, they are perfect role models. And because of them, August has the security of knowing that whatever he faces during the day, there will be nothing but love and support behind his own doors. That's worth a standing ovation for sure.

So when it comes to ranking, it's one of those stories that makes you think hard. Although I felt it was far from perfect in the ways I've mentioned, I still think it deserves almost full marks because of the strength of the impression it left.