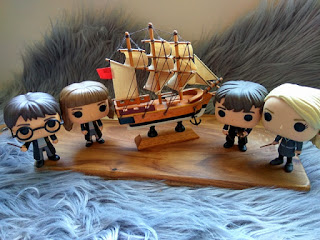 I'm talking about ships in the romantic sense here. In case you're unfamiliar with the term, I'll explain. Not so long ago, I was confused if people asked, 'Who do you ship in such and such a story?' I asked my eldest son, who always seems to know a lot about current jargon, but he was baffled too. 'Huh, shipping? It's all about imports and exports as far as I know.'

My daughter, who overheard, said she couldn't believe how naive we both were. 'It's all about predicting which couples you think ought to end up together. That's all there is to it.' So I learned something new, and it's become part of my bookish vocabulary. In fact, I'd been shipping for years, without being aware of the term.

One of the first things I learned about shipping is that it's often based on speculation, and readers have the potential to be disappointed as often as not. Authors have their own plans, which don't always match ours. I'll take you for a quick tour through several ships which might have had the potential to be grand vessels, but ended up either grounded or sinking. These are some of my favourite barques which got nowhere. Keep in mind that there'll be plot spoilers, owing to the nature of this list.

1) Jo and Laurie
Louisa May Alcott left many fans devastated when her beloved literary tomboy Jo friend zoned everyone's favourite boy next door, Theodore (Laurie) Lawrence. Especially since she arguably seemed to have been setting them up for a future together from the moment they met. (See my thoughts on what did happen. I've also reviewed Little Women and Good Wives.)

2) Fanny Price and Henry Crawford
The bashful and highly principled Mansfield Park heroine was a prime catch for any man. She ended up with her staid cousin Edmund, but several readers would have preferred her to marry the dashing Henry Crawford, who vowed to win her heart if it was the last thing he ever did. (My review is here. You might also enjoy my thoughts about Fanny's ultimate choice in The Day I was rebuked by Jane Austen.)

3) Marianne Dashwood and John Willoughby
These two were going great together, until he decided to look after his future and propose to a rich heiress. But Willoughby was so heartbroken and remorseful by his own decision, many fans might have wished him a second chance. After all, Colonel Brandon was a bit old, plain and fatherly for the excitable, emotional Marianne, wasn't he? Can you really imagine her happy with him over the long term?

4) Heathcliff and Catherine Earnshaw
These two are often hailed as one of the greatest romances of all time, to the point where she thinks of him as an extension of herself. (Remember the famous line, 'Nelly, I am Heathcliff') But Cathy chooses the refined Edgar Linton of all people, based on money and social prestige. And then Heathcliff fights dirty by seducing her innocent sister-in-law Isabella, to prove that two can play at that game. How off course can it get, even though Emily Bronte hinted that the ship sailed in the next life? (My review is here.)

5) Dorothea Brooke and Tertius Lydgate
A canny reader of George Eliot's Middlemarch might be forgiven for anticipating that the author might be blowing the course of the ship in this direction. Both these main characters had high ideals, great intelligence, and disastrous first marriages. Surely ending up together might have been great for the pair of them, and warmed our romantic hearts too? But no, Eliot had other, arguably better plans. (My review is here.)

6) Pip and Biddy
Charles Dickens could so easily have pulled off our own great expectations, to many readers' satisfaction. Pip was enthralled by the haughty beauty of the aloof Estella, but wise village girl Biddy always had his back and gave him great advice, even though he sometimes took his frustration out on her. We always get the feeling she'll accept him as soon as he comes to his senses. But when that finally happens, Pip rocks up in town to find Biddy on the point of marrying Joe Gargery. Oh Dickens, why would you do that? He's old enough to be her father. (See here for my review. You may also like my article about a time when one of Dickens' best friends rebuked him for disappointing many shippers.)

7) Marion Halcombe and Walter Hartwright
The Woman in White was a hit of the nineteenth century, and these two characters worked so well together, solving a creepy mystery and holding each other in high esteem. But Walter falls for Marian's half sister, the helpless and hysterical Laura Fairlie. He doesn't seem to twig that beauty is more than skin deep. Drats, he and Marian could have made such a power couple.(See here for my review.)

This was a popular ship with a medieval setting. A brave and self-sacrificing young Jewish girl named Rebecca is in love with Wilfred of Ivanhoe, the gallant knight. She nurses him through major wounds sustained in a tournament, and he becomes her hero when she's accused of witchcraft. But Ivanhoe marries his father's beautiful ward, Lady Rowena, who comes across as another of those one-dimensional, damsels in distress. Many readers sigh, not that we have anything against Rowena, but because we can't imagine she could possibly love Ivanhoe more than the unforgettable Rebecca did. Apparently Sir Walter Scott knew he was getting flak from readers, and defended himself by insisting that a marriage between Ivanhoe and Rebecca would have been totally unrealistic for the era. Still, that's no excuse, mate! You're the author!

9) Scarlett and Rhett
An American Civil War setting for this ship. The handsome and self-assured Mr Butler has his sights set on the flighty Miss O'Hara, while she flirts with every other man in their vicinity. Her own heart is stubbornly fixed on married man Ashley Wilkes for a very long time. Even when she marries Rhett, her attitude makes things rocky. By the time Scarlett comes to her senses, Rhett has moved on. 'Frankly my dear, I don't give a damn.'

10) Marius and Eponine
This one's a ship from the French Revolution. Les Miserables is such a long story, there's bound to be a heartbreaking romantic dilemma or two. Marius is a young revolutionary who's in love with Cosette, Jean Valjean's innocent ward. But Eponine, the daughter of a no-good innkeeper, also loves him, to the point where he becomes her guiding light. She's even willing to take a bullet for him. Once again, sweet and innocent seems to trump heart and soul. Oh, why do these nineteenth century authors keep doing this to us?

11) Gatsby and Daisy
This American classic has been a beached ship for many readers. Poor Jay Gatsby does everything in his power to reunite himself with his lost love, including becoming filthy rich and throwing super duper parties. It's easy to back these two just because he's put in so much effort, and her husband Tom is a big old, cheating thug. But it's not to be.

12) Luna and Neville
This one might have been sweet for Harry Potter fans. Awkward young Gryffindor hero who's convinced he doesn't have what it takes, and eccentric loner with the ability to see right to the heart of everyone. They each find their inner compass at the same time, while fighting for the same worthy cause. They might've been so great together. As for their future spouses, we simply don't know enough about Hannah or Rolf to sweeten the blow.

The rest of my Harry Potter ships involve just one young lady, Hermione Granger. Wow, this girl was a magnet for romantic speculations.

13) Hermione and Victor Krumm
This had serious potential. Even my own daughter wouldn't have minded seeing it happen, at least for a little while. While Ron's busy trying to work out (or deny) his feelings, the studious and taciturn young Durmstrang student is quietly charming the girl in her own territory, the library. While most people's focus is too shallow to see him as anything other than a famous quidditch champion, she has the depth to fathom the deeper man within. And the irony is, she cares least about what he's renowned for. Nice one, J.K. Rowling. But it was not to be.

14) Hermione and Draco Malfoy
This one still has a major following, to the point where some shippers refuse to let go, and they keep their illusions alive in fan fiction. I guess I can understand the appeal. Imagine Draco telling his bigoted, Death Eater father that he's fallen for a Mudblood. But seriously, I could never back this one in a million years. There was never a spark of interest from either side, they were poles apart in their world outlooks and we were never given a hint that it might happen. But it does prove how great a shipper's imagination might be. (You might like my article on bad boys with depth.)

15) Hermione and Harry
Many people might have expected that this was where the series was headed from the very start. Hermione was one of Harry's very best friends, devoted to his cause, and so smart and perceptive, it was impossible for those boys to get along without her. But since their platonic friendship is ideal for a future list about guys and girls who are great friends with no strings attached, I'm happy enough to let it go. In fact, I shipped both Harry and Ginny and Hermione and Ron from early on. Ships which do come to pass often make up for those which don't.

So I've shared several of mine. Do you agree with any of them, or have you any of your own to share that I haven't mentioned? In all of literature and fandom, whose failure to become a couple almost broke your heart? If you enjoyed this list, have a read of a related one, Tales of Unrequited Love. You might also like literature's most awkward marriage proposals.
Posted by Paula Vince at 7:52 AM