'The Confessions of X' by Suzanne M Wolfe 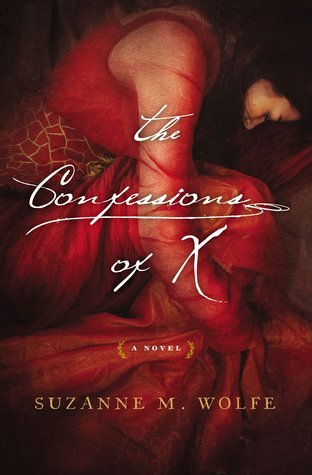 Genre: Christian fiction, historical and biographical fiction
Before he became the sainted church father of Christianity, Augustine of Hippo began a love affair with a young woman whose name has been lost to history. They were together for over thirteen years, and she bore him a son. This is her story.

She met Augustine in Carthage when she was just seventeen years old. She was the daughter of a tile-layer. He was a student and the heir to a fortune. They fell in love, despite her lower station and Augustine’s dreams of greatness. Their passion was strong, but the only position in his life that was available to her was as his concubine. When Augustine’s ambition and family compelled him to disown his relationship with the her, X was thrust into a devastating reality as she was torn from her son and sent away to her native Africa.

A reflection of what it means to love and lose, this novel paints a gripping and raw portrait of ancient culture, appealing to historical fiction fans while deftly exploring one woman’s search for identity and happiness within very limited circumstances

MY THOUGHTS:
This novel made me do the 'ugly cry.' When your tears are streaming, your face gets all blotchy and your nasal passages get all congested. As a general rule, I try to avoid books which have this effect on me because they're so sad, but this one somehow slipped through. I was waking up in the night thinking about what happened and feeling a bit sick as a result. As I prefer books which take me to a happy, optimistic place, that's the main reason for my lowish ranking. If you're the type of reader who thinks a good ugly cry is cathartic and therapeutic, you might even give it 5 stars.

The narrator of this story is the concubine of St Augustine. Since her name was never mentioned in the annals of history, she manages not to divulge it here either. Other characters sometimes use nicknames they're coined for her, such as 'Naiad' or 'Little Bird.' She begins the story as an elderly crone, and looks back on her life, from the time she was a little girl going around with her father, who was a mosaic maker. It includes bonding with the two males she loved most, Augustine and their son, Adeodatus, both of whom she lost. (This is not a plot spoiler. She lays that out at the start, so perhaps it's my own fault that I wasn't prepared!)

I was hoping the interesting snippets about how Augustine grew to become a celebrated saint might make the heart-rending quality worth it. I found them to be fairly sparse. There were a few passages in the form of discussions about the meaning of life over the table with friends, but for the most part, it was a domestic story about life in the time of gladiators and plagues. I have to say, she and Augustine made a decision which seemed inevitable to them, but I just couldn't see it their way. To me, they simply elevated social standing and personal ambition over the precious family life they shared. Bad, bad decision, surely even in the Roman Empire. Although Augustine came across as a loving partner and father, this didn't make me inclined to be a fan of his.

Thanks to Thomas Nelson and NetGalley for my review copy