'On the Edge' by Theresa Santy 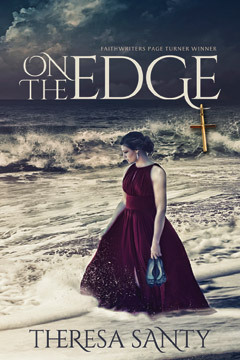 Genre: Contemporary, Christian fiction
For as long as she can remember, Kristen Craemer has been running from something. In high school and college, she ran competitively, until her Olympic dreams were shattered. Now, she runs to escape—from her past, from intimacy, from reality, and from the cold, black mist that haunts her nights.

Desperate to stop running, she turns to therapy, alcohol, and pills—anything to dull the fear—but her struggle intensifies with every passing night. Gradually, the nightmares encroach on her days, until everything she holds dear slips further away.

Kristen’s fears increase when she meets Ethan, a bronze-eyed Jesus freak. The claims he makes about God are too unbelievable to be true, and to Kristen they are more terrifying than her recurring dreams. She can’t open her heart to Ethan, and she won’t open her heart to his faith. Instead, Kristen keeps running, and every time she runs she finds herself standing at the shore of the Pacific Ocean, glaring into the crashing waves and fighting the urge to submerge herself beneath the turbulent water forever.

On the Edge is the powerful story of a “girl next door” who struggled to make it out of childhood alive, only to drown daily in shame and fear . . . until she finally dives over the edge and into redemption.

MY THOUGHTS:
Sometimes you just know a book will be a hit because the main character is so good, and this is one of those. Kristen Craemer won me over with her wry observations and kind heart. In the very first paragraph she throws a challenge to the ocean. 'Go ahead, twinkle until you evaporate, you massive body of water. And keep dreaming, because you'll not lure me in.' Straight away, I knew my journey with this girl would be interesting.

Kristen is an anxious interior designer who presents a sassy, cheerful front to others, but feels herself to be a mess on the inside. We learn quite a few things about her from the first five chapters. She's been devastated by a wealthy boyfriend who left her, and she's also mourning the sudden deaths of two close friends. She was raised by a drunken mother and drinks herself, mostly to keep away her dreaded nightmares about being pursued by some menace to the brink of the ocean. Kristen battles a strange compulsion to dash into the ocean and never come out again. She also has an inexplicable terror that her dream is blending into reality.

The pace moves steadily, and there is always a feeling that something more is soon to be revealed. Perhaps that's why this novel was the Faithwriters Page Turner winner. As Kristen reacts to unexpected bombshells and confrontations, it becomes evident that she had a rough start in life and is even more courageous and resilient than we first give her credit for.

Her romantic interest, Ethan, has also had a rough upbringing. He is the sort of Christian many of us may have come across. He spouts phrases and religious jargon he's evidently picked up from other Christians to the extent that it's second nature to him and he doesn't realise he's doing it. (Some people call this 'Christianese' but perhaps that word itself fits into the definition.) His talk is incomprehensible to Kristen, who often calls him up on it. For example, when he refers to his 'identity in God', she rightfully replies that she doesn't know what that means. It may be a good wake-up call for Christian readers who tend to do the same, especially since Ethan is clearly sincere in his desire to get to know her better, with no agenda to evangelise.

One thing I really appreciate is the fact that there is no swearing or crude language, and clearly no need for it. People have said there's a place for it in good characterisation, but this novel seems to be proof that a story will always work without resorting to coarse language. Several of Theresa Santy's characters are desperate or despicable people who would surely swear in real life situations, yet you don't miss it when they don't. I wouldn't have even noticed if I hadn't been thinking about it, and then looking out for it.

Altogether, it's an original, uplifting story which I'm glad I read.