'Summer of Dreams' by Elizabeth Camden 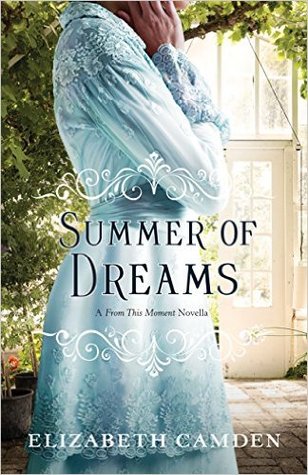 Genre: Historical, Christian, Romance
The daughter of a powerful army general, Evelyn White vows she will never marry a man in uniform. Which is why Clyde Brixton, a West Point cadet on the verge of graduation, presents a problem. Their attraction is instantaneous, but it threatens Evelyn's lifelong dream of going to college.

Clyde's brilliance in the new field of electrical power has him poised for a promising career in the Army's Corps of Engineers. The one thing he never anticipated was Evelyn White, a woman whose soaring ambition matches his own.

As they fall in love over the course of one magical summer, they believe dreams are enough to weather any challenge. But when they are tested by forces neither saw coming, will the fragile bonds forged during those dream-filled summer days be strong enough to survive the storm?

MY THOUGHTS:
It seems to be the fashion for free or very cheap kindle novellas to lure us into a series, and it works for me.

This one is all about three turn-of-the-century buddies having a good time using their talents to pursue their passions. Evelyn is a rich girl with a bent for engineering but no way to pursue it, since she lives in a male-dominated society with a bossy, patriarchal father. Clyde is a poor boy with a load of demerit points to work off before he can graduate from West Point Academy. Romulus is Evelyn's cousin, a good-looking and flamboyant Harvard student studying natural science. Together, they build a magnificent greenhouse with an artificial environment capable of sustaining nesting hummingbirds and a variety of delicate butterflies, fish and plants.

It's fun when modern authors, like Elizabeth Camden, get a chance to let their experience of contemporary times embellish their historical fiction. For example, Clyde's poor father crashed and burned while he was working on a project which might have turned out to be the predecessor of the kitchen fridge. There's no way the characters could have known that he might have been onto something, but we readers do. There's also a good sense that what goes around comes around. While I sensed Clyde's excitement as he talked about the fascinating technological changes which seemed to be accelerating before his eyes, I couldn't help but think of several young men his age I know personally, who get similarly excited over advances in computer technology.

One main theme is that sometimes limits just can't be pushed through, but that shouldn't stop anyone channeling their passion elsewhere. When we can't pursue our ultimate dreams, we just do what we can. Evelyn finds it impossible to push through society's expectations and her father's resistance to pursue a tertiary degree, but she can pour all her enthusiasm and knowledge into creating the dream greenhouse in her backyard. She admits that her self-taught knowledge is full of gaps, but won't let that stop her.

The trio never work from a bitter, 'Let's show them,' sort of attitude, but it's just what they do. If the world doesn't want your offerings, don't let them push you down just the same. Well, maybe there is a bit of cockiness from Romulus, who says, 'This greenhouse is mankind's war against mediocrity and acquiescence.' Even though nobody else would see or enjoy it, it was still true for them. And of course there's a strong romance thread, which many ladies will enjoy.

This book leads on to 'From this Moment', which I'll review very soon.