'The Truth about Peacock Blue' by Rosanne Hawke 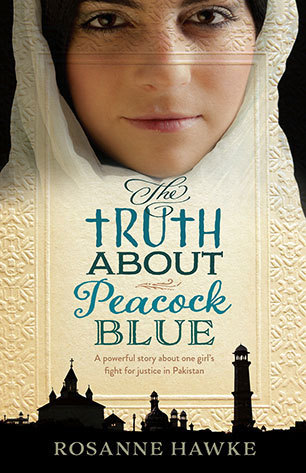 I attended the launch of book a couple a weeks ago, bearing a long peacock feather. Rosanne Hawke is a friend and fellow South Australian, and I've enjoyed her work for many years. This book lives up to the impact of her others, and fits well into this week's category.

A powerful story about one girl's fight for justice in Pakistan.

Everything changes for Aster the night her brother dies. Suddenly she's the only hope of the family, and instead of an early marriage to a boy from her small village in Pakistan, her parents decide to send her to the government high school in her brother's place. Aster is excited about this unexpected opportunity for a career, but, as a Christian, she is unprepared her for the difficulties of attending a Muslim school: her fellow students are far from welcoming and one of her teachers takes an instant dislike to her. One day, she is accused of intentionally making a spelling mistake to insult the holy prophet. Her teacher is incensed and accuses her of blasphemy. A violent crowd forms outside the school and Aster is taken to jail to be tried at a later date.

A young social justice lawyer takes up her case, and Aster's Australian cousin, Maryam, starts an online campaign to free Aster. But will it be enough to save her?

Fourteen-year-old Aster Suleiman is thrust into a nightmare. She knew she wasn't her Islamic teacher's favourite student, but a mistake on a High School exam has her arrested on a charge of blasphemy. As the teacher, Mrs Abdul, supposedly destroyed the offensive paper on the spot, her word alone is enough to shatter the lives of several people. Aster's parents have recently lost their son to a violent asthma attack, and now their precious daughter faces a death penalty.

I found Aster's plight extremely moving, especially as she is presented from the start as loving, merry-hearted and peaceable, like my own teenage daughter. Her greatest misfortune is simply to find herself on the wrong side of an extremist authority figure in a country like Pakistan, where blasphemy accusations can be used like a weapon. Through this powerful story, she becomes the representative for members of minority groups who face unjust persecution.

Peacock Blue is Aster's online identity, and the campaign to set her free is taken up by her cousin Maryam, who lives in Australia. This comes across really well, as peacocks are beautiful and inoffensive, like Asta herself, and their feathers are collected as symbols of renewal and patience.

As I read, I couldn't help noticing the huge potential for ripple effects. Minor characters are touched upon enough to show that they have astounding and terrifying stories of their own. Some are women who share Aster's prison cell and the adjoining one. Others are folk who leave comments on Maryam's blog posts. If their stories were all to be told at large, the effect would be far-reaching and never-ending.

The power of the written word comes through strongly. It's there when Aster receives supportive notes from friends and strangers, and when cell mates are impacted by the tales she tells from the Bible and books such as 'To Kill a Mockingbird.' Aster is encouraged to write her own story, just to increase people's awareness of atrocities which can so easily be hushed and swept under the carpet. Some of her emotions come across really helpful, although I've never been through such trauma in my lifetime. For example, when Aster can't feel God's presence in her squalid surroundings, the passing of time gives her a revelation about the true nature of happiness.

One of my favourite quotes from this novel compares prejudice to a dung heap. 'It seethes with life when it is left alone. We need to dig this dung heap up and spread it over the ground for all the world to see.' And as some of the less extreme characters ask, 'Is God so small that we have to protect Him from a child?'

I hope this novel will help make more of us increasingly aware of the plights of those who are arrested on a whim and given unfair trials, along with those poor asylum seekers who are denied entry to safe countries like Australia, because world attention may be a huge step toward stopping it all.

You may also enjoy Rosanne Hawke's guest post about writing for young adults, here.
Posted by Paula Vince at 5:00 AM